C-295 MPA for the Chilean Navy

The Airbus C-295 Persuader is a multipurpose transport, maritime reconnaissance and submarine fighter aircraft manufactured by Airbus Defense and Space , which was developed by the former CASA .

The C-295 was developed by the Spanish CASA based on the CN-235 from the end of 1996, initially as a transport aircraft in-house. Compared to the previous model, it has a fuselage that has been lengthened by additional segments in front of and behind the wing, stronger engines and reinforcements on the landing gear and wings. The machine was officially announced at the Paris Air Show in June 1997 and the first prototype (a conversion of a CN-235) flew for the first time in November 1997. The first flight of the first newly built prototype of the machine took place on December 22, 1998.

The first customer (delivery from November 2000) of the transport version was the Spanish Air Force with nine machines. These were put into service in 2001.

Further orders followed, including twelve transporters for Poland (the first two machines ordered in May 2001 were received by the Polish Air Force in August 2003. The order was increased to 17 machines. A replacement for one machine that had crashed was delivered); for the Navy of the United Arab Emirates for maritime surveillance; twelve aircraft for the Brazilian Air Force for the SIVAM Amazon surveillance project; the Royal Jordanian Air Force (two) and the Finnish Air Force .

The machine was inferior in 2007 in the US Army and US Air Force tender for up to 145 aircraft. This important order, initially worth $ 2.04 billion, went to competitor Alenia C-27 .

The equipment of three machines with the name C-295MPA for Chile ordered in October 2007 and delivered from April 2010 and intended for submarine hunting is particularly extensive. For this purpose, magnetic field sensors, an APS-143 (V) 3 radar and four control consoles are installed in the fuselage, among other things in a tail boom.

On June 7, 2011, the AEW & C version with a radome about 6 m in diameter attached to the fuselage had its maiden flight in Seville with pilots Alejandro Madurgas and Alfonso de Castro and two test engineers on board.

Since the integration of CASA's military aircraft division into Airbus Military , the C-295 has also been part of the Airbus product range . The cooperation with Indonesia's present-day Indonesian Aerospace, which had already been tried and tested with the two other transporters of the former CASA, was extended to the C-295 in October 2011.

In November 2019, the order backlog was 210 machines, 175 of which have already been delivered. Two C-295s were destroyed in incidents. 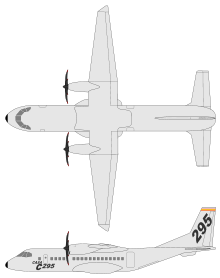 Transport version , for which an air refueling kit is also available

Modernized version, equipped with winglets , among other things

C-295ISR, which can be armed with MG (caliber 12.7 mm e.g. M3 Browning ) or cannons ( BK 27 from Rheinmetall) on the rear side doors and in the future also with various missiles and Mk-82 warheads. Airbus has not yet announced the user state (as of November 2017).

Aircraft types from the manufacturer Airbus