CRP derrick on the sea ice in the Ross Sea, Antarctica. The piece of ice in the foreground was drilled out of the sea ice so that the rods could be lowered.

Between 1997 and 1999, the international Cape Roberts Project (CRP), with the participation of Australia, Germany, Great Britain, the Netherlands, Italy, New Zealand and the USA, drilled up to 1000 m long drill cores to reconstruct the history of the Antarctic glaciation. After preliminary seismic explorations, geophysicists identified the area off Cape Roberts in the Ross Sea at 77 ° 0 ′ 0 ″  E , 163 ° 43 ′ 0 ″  E on the edge of the Transantarctic Mountains as a suitable position . The boreholes were sunk through the 2 m thick sea ice in water depths of 150 to 300 m with a conventional derrick, which was clad against the harsh climate . Three overlapping boreholes reflected the last 34 million years of geological history and glaciation of the Antarctic in a quality that had not been achieved before. The nearby American McMurdo Station and New Zealand's Scott Base served as the logistical and scientific base . The drilling was supplied via the ice with snowmobiles and snowmobiles, and personnel exchanged with helicopters . The logistical costs were approximately four million US dollars . -77 163.71666666667

The Antarctic is an essential part of the global "climate machine". Today's atmospheric and oceanic circulation patterns, as well as their changes over the course of the Earth's history, are also controlled by the Antarctic ice sheet . Changes in the size and volume of the ice sheet therefore also affect the climate and sea ​​level . Knowledge of the development history of the Antarctic ice sheet is a prerequisite for understanding these processes and thus also for predicting the future. Geology thus provides the geological contribution to the current climate discussion and to the modeling of future developments.

Data of the holes

Location of the wells in the Ross Sea

The Cape Roberts project aimed with the help of three located stratigraphically overlapping drilling on the Antarctic continental shelf in the Ross Sea in a time frame from the middle Cenozoic ( Eocene - Oligocene transition) sediments to drill. The geological sequence should provide new comprehensive insights into the history of the Antarctic glaciation and the climate of the last 34 million years and help to reconstruct the history of the rise of the Transantarctic Mountains . 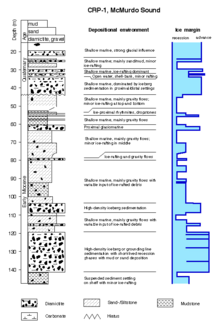 The sediments from the boreholes also document the history of volcanic activity in McMurdo Sound and show that volcanism similar to that of the McMurdo Volcanic Group goes back to 25 mya, i.e. much further than outcrops on land show (19 mya).

Reconstruction of the paleoenvironmental history off Cape Roberts

Numerous ice advances were reconstructed for the Oligocene and the Lower Miocene , in which the ice, coming from East Antarctica , flowed through the Transantarctic Mountains and rested on the subsoil close to or above the drilling position (red point). During these times, diamictite was deposited.

During the Oligocene and Miocene retreats, the ice had retreated into the valleys of the Transantarctic Mountains. Icebergs calved from the glaciers and drifted out into the open sea . Distal glacial marine sediments such as sands , silts and clays were deposited at the drilling site .