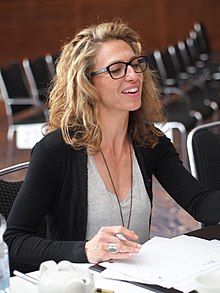 Black grew up in Sydney and attended the Kambala Girls School . However, she spent most of her life in New Zealand and Europe. In 1990 she was a finalist in the Globe Shakespeare competition and then on tour through Europe as Portia in The Merchant of Venice . Other theater appearances followed , such as Spotlight On Women , Wildes Portrait Of Dorian Gray , Loose Ends and Pick Ups for the Belvoir Street Theater in Sydney and Little Women and The World Knot for the Bicentennial Opera .

Black married in 2004 and embarked on their honeymoon immediately after filming Farscape: The Peacekeeper Wars . Her first pregnancy was built into the storyline of Stargate SG-1 (from episode 9.19 "Crusade"). A second son was born in November 2007.

In Australia and New Zealand, she gained a high profile through various roles in television series . She had her first television appearance in 1993 in the mini-series Seven Deadly Sins , followed by the Australian television series A Country Practice (1981-1993). In the New Zealand series City Life , which aired between 1996 and 1998, she played the lawyer Angela Kostapas .

Black had guest appearances in, among others, Water Rats - Die Hafencops , Hercules and Xena - Die Kriegerprinzessin . A planned spin-off in which Black would have played an Amazon was never broadcast; the pilot film called Amazon High was shot, but the footage was used in the Xena episode Lifeblood .

In 1994 Black appeared in the never- aired comedy thriller Goodfruit . She took on a supporting role in the dark science fiction thriller Pitch Black - Planet of Darkness (2000) as Sharon "Shazza" Montgomery . She played the role of Pandora in Queen of the Damned , the sequel to Interview with a Vampire .

The decisive breakthrough came Claudia Black to the science fiction series Farscape : She played from 1999 to 2004 the character Aeryn Sun . This role earned her five nominations for the Saturn Award for “Best Actress”, the award for “Best Actress” of the year 2000 from scifi ign and from TV Zone Magazine and the SFX Magazine Award for “Sexiest TV Actress” ". Her performance in the miniseries Farscape: The Peacekeeper Wars was honored with the Saturn Award 2005 for "Best Actress".

Furthermore, Claudia Black had a role in the last seasons of the series Stargate - Kommando SG-1 . Her character, the alien Vala Mal Doran , was introduced in season eight in 2004. Due to her great popularity with the Stargate fan base, Black received a recurring supporting role in the ninth season. In the tenth and final season (2007) she was part of the regular cast, as well as in the two Stargate films Stargate: The Ark of Truth - The Source of Truth and Stargate: Continuum (2008).