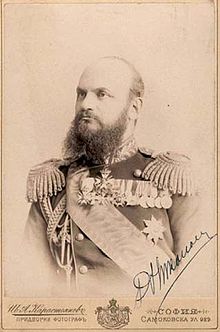 Danail Zonew Nikolaev (also Danail Tsonev Nikolaev , or Danail Zoneff Nikolaeff , written in Bulgarian Данаил Цонев Николаев , born December 30, 1852 in Bolgrad , today in Ukraine , † August 29, 1942 in Bankja near Sofia ) was a Bulgarian general and politician . He took part in the Serbian-Turkish War of 1877, the Russo-Turkish War of 1877/78, the Unification of Bulgaria and the Serbian-Bulgarian War of 1885.

Danail Nikolaev was born on December 18 . / December 30, 1852 greg. Born in the Bessarabian city ​​of Bolgrad, then part of the Russian Empire, to a family of Bulgarian refugees. His family originally came from Tarnowo . In 1871 Danail graduated from the Bolgrad grammar school Holy Brothers Cyril and Method (Bulgarian Болградската гимназия "Св. Св. Кирил и Методий").

Service in the Russian Army

From 1871 to 1873 Nikolaev served in the 54th Minsk Regiment, which was stationed in Chișinău . On September 19, 1873 he entered the Odessa Army School as a Junker . Nikolaev finished the academy in 1875 with the rank of Portupaj-Junker and went back to his regiment, which was under the direction of General Mikhail Ivanovich Dragomirov . When he heard of the preparations for an imminent Serbian-Turkish war, Nikolaev wanted to quit his service in the Russian army . However, he was given leave of absence. In the Serbian-Turkish War Nikolaev fought as a volunteer and took part in the battles at Babina Glava, Mirovica and Gamzigrad.

In the Russo-Turkish War of 1877/78 Nikolaev commanded a company of the 5th regiment of the Bulgarian Volunteer Corps . With her he took part in the decisive battles on the Schipka Pass and near Scheinowo . On July 8, Nikolaev was promoted to lieutenant and on August 10 of the same year to first lieutenant in the Russian army.

Russia won the war with many losses and with the Peace of San Stefano a Bulgarian state was established that comprised large areas separated from the Ottoman Empire. This was partially revised by the Berlin Congress in 1878. Bulgaria became an autonomous principality , which, however, remained tributary to the Ottoman Empire. Eastern Rumelia (southern Bulgaria) initially remained an Ottoman province, but the Ottoman Empire renounced a military presence and Macedonia remained entirely under Ottoman-Turkish rule.

After the liberation of Bulgaria , Nikolaev served in the newly formed militia of Eastern Rumelia. At the beginning of 1880 he was appointed commander of the 1st Plovdiv Regiment and on March 1 of the same year he was appointed captain of the Russian army and the East Rumelian militia. In May 1880 he became the commander of the 2nd Plovdiv Regiment. Also in 1880 Nikolaev became the best man of his good friend Kosta Panica , an officer of the militia unit in Chirpan . At the wedding, Nikolaev met Radka, the youngest sister of the bride, whom he married that same year. On the day of his wedding, Konstantin Stoilow , secretary of the Bulgarian Prince Alexander I , presented him with the Bulgarian Military Order for Valor III. Class for his services in the Russo-Ottoman War of 1877/78.

In 1883 Nikolaev was appointed major in the militia of Eastern Rumelia. During the annual maneuvers in 1885, Nikolaev commanded a large part of the militia at Saedinenie . On the night of September 6th, Jul. / September 18, 1885 greg. The maneuvering troops occupied the east Rumelian capital Plovdiv and deposed the governor Gavril Krastewitsch . Danail Nikolaew, together with the Bulgarian secret revolutionary central committee (BGRZK), disempowered the representatives of the Ottoman Empire in Eastern Rumelia. On the following September 6th, the newly installed government under Georgi Stranski , who also belonged to Nikolaev , proclaimed the unification of Bulgaria . In the government he took the post of commander-in-chief of the militia of Eastern Rumelia. 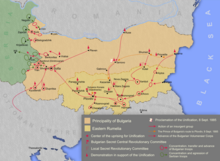 On September 9, 1885, he became the commander of the Tarnowo-Sejmen Regiment, which took up position on the border with the Ottoman Empire in what is now Simeonowgrad . The main thrust of the Ottoman army in a war with the Ottoman Empire was expected there , as Eastern Rumelia was nominally still an Ottoman province. On September 11th, Nikolaev was appointed lieutenant colonel . However, an attack by the Ottomans did not take place, instead declared on November 1st jul. / November 13, 1885 greg. Serbia , supported by Austria-Hungary , Bulgaria the war. Both countries wanted to prevent the events from spilling over to Macedonia, where Bulgarians also lived. Russia was also hostile to the expansion of Bulgarian territory through the unification and its rulers, in contrast to Great Britain . In response to the unification, the Russian Empire ceased military cooperation and withdrew both military personnel and military equipment from Bulgaria.

The Serbian plan was to break through the Bulgarian defenses and win the war by a massive attack by four divisions on the Bulgarian capital Sofia . The main Bulgarian army was still concentrated on the border with the Ottoman Empire and had to cross the unified Bulgaria in the days that followed. The units commanded by Nikolaev, including a regiment (approx. 2000 men) made up of Turkish and Pomak citizens of Bulgaria, arrived in July on the evening of November 6th . / November 18, 1885 greg. Slivnitsa, where the battle of Slivnitsa (November 17th – November 19th, 1885) had raged since the day before . That is where the defensive line of Sofia had been built. Upon arrival on the battlefield, Nikolaev took over the military leadership as senior officer of Major Avram Gudschew and now commanded the Bulgarian counter-offensive, which could only be stopped on Serbian soil near Pirot by the intervention of Austria-Hungary. After the Battle of Pirot , the Serbian army surrendered.

After the war, Danail Nikolaev was made a colonel . A year later, the Bulgarian Prince Alexander I was forced to abdicate by an officer coup initiated by Russia and was taken prisoner to Russia. News of the coup reached Nikolaev in Vienna and he returned to Plovdiv via the Danube and Lom . Nikolaev was able to take an active part in the counter-coup, led by Parliament President Stefan Stambolow . In the interim government installed, Danail Nikolaev became defense minister in the first cabinet of Vasil Radoslawow .