Stefan Nikolow Stambolow ( Bulgarian Стефан Николов Стамболов ; born January 31, 1854 in Veliko Tarnovo ; †  July 18, 1895 in Sofia ) was Prime Minister of Bulgaria , one of the most important founders of modern Bulgaria , long-time chairman of the People's Liberal Party and one of the "Freedom Apostles" of the April uprising of 1876. He was murdered by Bulgarian nationalists from Macedonia for his moderate policy towards Macedonia and in retaliation for the execution of Kosta Panica .

Stefan Stambolow was born on January 31, 1854 in Veliko Tarnovo, but his family came from nearby Trjawna . His father was a participant in the Weltschower uprising of 1835 and in the uprising of Captain Djado Nikola (1856). Stambolov was influenced by revolutionaries like Christo Ivanov , Matei Preobrazhensky and Christo Karaminkow , who were good friends of the family.

Stambolov's school education began in Veliko Tarnowo, but he studied from 1870 to 1872 at the prestigious Bulgarian seminary in Odessa . Because of his contacts with Russian revolutionaries, he was excluded from the seminar. In 1873 Stambolow worked for a short time as a teacher in his hometown, after which he settled in Romania, where a strong Bulgarian exile community lived.

Struggle for the independence of Bulgaria 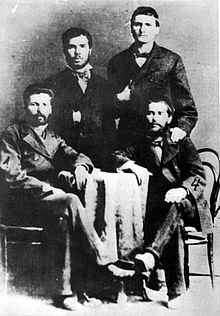 Stambolov also took part in almost all events for Bulgaria's political independence in the 1870s; Stambolov joined the Bulgarian Revolutionary Central Committee (BRZK) and played an important role in the preparation and implementation of the Stara Sagora Uprising in Stara Sagora (1875), the great April Uprising (1876).

In response to the decisions of the Berlin Congress , Stambolow was one of the founders of the "Edinstvo" ( Единство / unit) committees. The First Committee was established in Veliko Tarnovo. The committees had set themselves the goal of revising these decisions and "re-establishing Bulgaria within its national borders in accordance with the peace of San Stefano ". One of their first actions was the preparation and implementation of the Kresna-Raslog uprising (1878) in Macedonia , in which Stefan Stambolow also took part.

However, Russia was dissatisfied and the Russian Tsar Alexander III. refused to recognize the Bulgarian prince Alexander von Battenberg as the ruler of the enlarged Bulgaria. At the instigation of Russia , a group of pro-Russian officers launched a coup against the Bulgarian Prince Alexander I and forced him to abdicate on August 9, 1886. He was then deported to Russia.

With the support of Stefan Stambolow, who was parliamentary president and with the help of the military, counter-coup, Alexander von Battenberg was able to return to Bulgaria and briefly to the throne again. On September 7, 1886, however, he finally renounced the rule because he no longer enjoyed the trust of the Russian tsar. In Bulgaria, a regency was formed under the leadership of the pro-Western Stefan Stambolow, which should look for a successor to Alexander von Battenberg. Meanwhile, minor pro-Russian uprisings broke out across the country, which Stambolov and loyal military officials put down. As a result, leading Bulgarian Russophiles (pro-Russian forces) in the country were placed under house arrest (such as Kliment Tarnowski ), imprisoned (such as Panajot Chitow and Petko Wojwoda ) or left the country (like Ivan Wasow ). After long internal political turmoil, Ferdinand von Sachsen-Coburg and Gotha came to power , who was finally elected prince in 1887.

After the new Prince Ferdinand von Sachsen-Coburg and Gotha was confirmed in his office, Stefan Stambolow was appointed Prime Minister. However, Ferdinand was not recognized by Russia and the other great powers as the ruler of Bulgaria because his election was made without voting with them.

From 1887 to 1894 Stefan Stambolow held the office of Prime Minister. As a nationalist, he was able to strengthen Bulgaria's foreign relations, economy and general political power. After the Russian Empire broke off diplomatic relations with Bulgaria on November 8, 1886, Stambolov pursued a policy hostile to Russia, which brought him many political opponents, against whom he cracked down hard. When Stambolov finally embarked on a moderate policy towards the Ottoman Empire in relation to Macedonia, former companions such as Kosta Panica turned away from him and tried several times together with other Macedonian Bulgarians , sometimes with Russian support, to murder him. In one of these attempts Panica was arrested, then sentenced to death and executed on June 26, 1890 in Sofia.

After the panica conspiracy , facts had to be created on the Macedonian question and against Russian interference in Bulgarian domestic politics. Both Stambolov and the Ottoman Sultan Abdülhamid II saw this . The Sublime Porte sent at the urging Stambolov in 1890 a representative to Sofia to discuss formally on the condition of Muslim religious property in Bulgaria. With the first visit of a representative of the Sultan (after the Berlin Congress of 1878 the principality was an autonomous state, tributary to the Ottoman Empire) since 1887, Ferdinand was recognized de facto and de jure as Bulgarian ruler and the Russian pressure to remove him was eased . Furthermore, Stambolow was able to enforce the right to found communities in the Ottoman Vilâyet (province) Adrianople (today Eastern and Western Thrace ) for the Bulgarian Orthodox Church (BOK) , as well as the establishment of dioceses in the Macedonian areas of Ohrid , Veles , Bitola , Newrokop and Skopje , which were secured with sultan's advisors . Thus, after centuries of Greek church supremacy (the Bulgarian patriarchate was abolished in 1394, the archbishopric of Ohrid was abolished in 1767), the Bulgarian population within the Ottoman Empire was given the opportunity to hold the liturgy in their own language.

The expansion of the influence of the BOK in Macedonia and Thrace happened at the expense of the Greek Patriarchate of Constantinople , which traditionally claimed this area for itself and with the increasing spread of the Megali Idea among the Greeks and thereby the foundation of dioceses since 1872 (independence of the BOK as Bulgarian Exarchate ). With the expansion of influence, the period of rebirth (among the basic demands was the holding of the liturgy in the Bulgarian language), which came to a standstill in this region in the 1870s due to the numerous uprisings, could be continued and fulfilled.

Stambolov's successful strategy through cooperation with the Sublime Porte to improve the position of the Bulgarians, who continued to live in the Ottoman Empire after the Berlin Congress, also weakened the position of the Macedonian and Thracian nationalists, who in 1893 became Bulgarians within the empire Macedonian-Adrianople Revolutionary Committee (BMARK) merged.

On July 3rd jul. / July 15, 1895 greg. was carried out in Sofia by Macedonian nationalists who did not agree with his moderate policy towards Macedonia , an assassination attempt on Stambolov . He was on his way home, could still recognize his attackers and communicate them to his companion Dimitar Petkov . Stambolov succumbed to his injuries three days later.

Stambolov is depicted on the obverse of the Bulgarian 20 lev , and streets, squares and institutions in many places bear his name. The Stambolov Crag is named after him on Livingston Island in Antarctica .

Prime Minister of the Principality of Bulgaria 1879–1908