Eichelsdorf Church from the south

View of the church hill

The Evangelical Church in Eichelsdorf , a district of Nidda in the Wetteraukreis ( Hesse ), is a late Romanesque hall church from the first half of the 13th century. After renovations during the Thirty Years' War in 1631 and after a fire in 1657, it received its current appearance. For historical and artistic reasons, the small hall church with a dome roof turret and recessed rectangular choir is a Hessian cultural monument .

In 1187, the Eichelsdorf church is mentioned as a branch. Eichelsdorf (Eigelesdorph) belonged to the parish of Nidda, together with today's deserted area of ​​Rechelshausen, when Count Berthold II gave the old parish church in Nidda, including extensive property, to the Johanniter- Kommende , which belonged to the Wetterau Ballei . The current church in Eichelsdorf was built in the first half of the 13th century.

From an ecclesiastical point of view, the parish church belonged to the Archdeaconate of St. Maria ad Gradus in the Archdiocese of Mainz in the Middle Ages . In the altar there was a parchment in 1705 with August 8, 1452 as the consecration date. It was consecrated to the Virgin Mary, the Evangelist John and Saint Lawrence of Rome and Cyriacus .

With the introduction of the Reformation , Eichelsdorf switched to the evangelical creed. The first evangelical pastor was a "Herr" Wolfgang in 1538. In the post-Reformation period, Ober-Schmitten was parish off as a branch in Eichelsdorf. The church was damaged in the Thirty Years War and restored in 1631. A legend explains the current location outside of the village: “When the Eichelsdorfers had the intention to build a church, it was supposed to be down in the ground, by the Junkermühle. But the devil did not suffer that. Every night he carried the stones and wood for them up to the hill above the village. All asking and begging was useless, the church had to be built where it is now, no matter how inconvenient it was for the people. "

Roof turrets from the baroque era

As a result of the schoolmaster Hermann Kummer's lack of caution, who was drying his tobacco in the attic of the church, the roof structure burned down in 1657. As a result, in 1658 it was given a steeper gable roof with a ridge turret. The destroyed Our Father Bell was cast again in 1662. The medieval altar was demolished and renewed in 1676. The community purchased its first organ in 1692, which was replaced in 1877 by a new instrument by Johann Georg Förster with eleven stops on mechanical cone chests. Interior renovation followed in 1705. In the course of this, the stucco work in the choir was removed. In the 18th century galleries were built into the ship and an entrance through the north wall was broken.

Due to moisture, the foundations of the choir on the east side were drained from 1914 to 1919 and another choir window was installed. In 1926 the broken Our Father Bell was cast over and another bell was added. When a new heater was installed during a major renovation in 1927, graves with remains of bones were found under the floor of the church. Ten years after the delivery of a bell in 1942, the Rincker company cast two new bells.

After the church was rebuilt in 1958, the Ober-Schmitten parish separated from Eichelsdorf in 1961 and became an independent parish. In the 1980s the old connection was restored.

In the years 1964 to 1965 the church in Eichelsdorf was extensively renovated, which also included an extensive renewal of the church furnishings . Two choir windows were bricked up, the Romanesque window in the lower area was restored, the choir arch and the sandstone rosette above the west portal were renovated and the sacrament niche in the choir was lowered. The outside staircase on the north side that led to the gallery was removed and the door walled up. In 1975 the sacristy was added and the bell tower was renovated, and in 2003 the choir roof was renewed.

The east- facing church is slightly raised on a hill outside and east of the village. The small hall made of quarry stone masonry on a rectangular floor plan is plastered white. The ship's foundations date back to the 13th century and were not expanded in 1631, as assumed. The corner blocks , the base and the walls made of red sandstone are left out of the plaster. A drawn-in and lower rectangular choir from the first half of the 13th century forms the east end. The site is enclosed by a partially preserved cemetery wall , which indicates the defensive character of the church.

In the east, an octagonal hooded roof turret from the 17th century is attached to the slated gable roof of the ship, which is completely slated and develops from a square base. Small rectangular sound openings are set in the bell chamber. It houses a three-ring bell, a bell by Johannes Henschel, which was cast during the time in office of Pastor Ludwig Christoph Horn (1695–1730), and two Rincker bells from 1952. The hood is crowned by a weathercock with a tower knob and cross. The gable roof of the choir and the east gable side of the nave are also slated. The nave is illuminated on the north side through two narrow slit windows and on the east south side through two large arched windows from the Baroque period and on the west south side through a small rectangular and a high rectangular window. The choir is supplied with light through a large, arched south window and two narrow windows in the east and north. The two narrow windows in the north and the east choir window are conical and bevelled and date from the Romanesque period, the north window of the choir already has a blunt pointed arch. Above the round-arched west portal with ogival screen and crabs is a round window, in the gable triangle a cross-shaped opening and in the top a triangular gable made of red sandstone as a spoiler .

Interior with a view of the choir 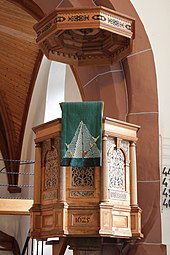 In the ship, the flat ceiling rests on a longitudinal girder . A large round arch made of red sandstone with square painting opens the choir to the ship. Since 1965, the choir has been closed off by a wooden cross rib vault that rests on the old console stones. The original stone vault has not been preserved and was probably removed in the middle of the 18th century or 1808. A modern gallery has been built into the choir since 1965 , which serves as the installation site for the organ. Compared to the old gallery, it is set back and raised. The wooden angular gallery in the north and west dates from the 18th century. It is supported by simple square posts and has a simple coffered parapet. The floor has been covered with sandstone slabs since 1971.

The oldest piece of furniture is the wood-covered, polygonal Renaissance pulpit with an eight-sided sound cover, which dates from 1625. It is made of spruce and richly decorated. The base area has veneers and inlays made of different colored woods, the cornice is profiled. Fluted three-quarter columns (one made of oak and three made of pearwood) structure the five pulpit fields, which have oak carvings and maple framing. Tendril ornaments are painted with stencils under round arches. In the course of the interior renovation in the 1960s, a new sandstone altar, a new octagonal sandstone baptismal font from Dehnel and a new organ were purchased. The wooden church stalls leave a central aisle free.

Today's organ was built by Werner Bosch Orgelbau ( Sandershausen ) in 1965. It has twelve registers on mechanical slide chests , which are divided between two manuals and a pedal . The disposition is as follows: