George Edward Trafton (born December 6, 1896 in Chicago , Illinois , USA , † September 5, 1971 in Los Angeles , California ), nicknamed The Brute , was an American football player and coach. He played as a center for the Chicago Bears in the National Football League (NFL).

Trafton played American football in Chicago high school . In 1918 he joined the US Army and was a captain of a military team. Under Head Coach Knute Rockne he played after his military service during his short studies at the University of Notre Dame for their football team , the Fighting Irish . Trafton was playing on a semi-professional football team at the same time, which was against the rules for college players. Rockne learned of this and removed him from the team. His studies ended after just one year without a degree. 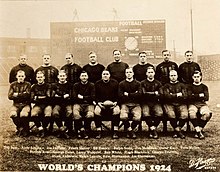 Trafton signed a professional contract with the Decatur Staleys in 1920 and moved with this team from George Halas' trained team to Chicago the following year. In 1922 he stayed for a year and was a coach at Northwestern University , but then continued his career with the Bears. In 1931 and 1932 he was the captain of the Bears NFL champions . He ended his playing career in 1932. Trafton was the center who was the first player in this position to snap the ball with one hand at the quarterback . George Trafton was an exceptionally tough player who was despised by the players and supporters of the opposing teams.

Career as a coach

Trafton worked after his playing career as an assistant coach at various NFL clubs, such as the Green Bay Packers and the Los Angeles Rams . George Trafton is buried in Holy Cross Cemetery in Culver City , California.

Trafton has been a member of the Pro Football Hall of Fame , the Chicago Bears Hall of Fame, and the NFL 1920s All-Decade Team since 1964 . He was voted All-Pro six times .