The Gibson SG is an electric guitar model. It has been manufactured by the US company Gibson since 1961 . It was originally intended as the successor to the Gibson Les Paul .

In the late 1950s sales of Gibson electric guitars fell. In order to react to the competition of the models from Fender , in particular the Fender Stratocaster and Fender Jazzmaster , various new guitar models were developed at Gibson. The main focus was on the modern design of the guitars, as Gibson wanted to break away from the image of the conservative jazz guitar maker. The previous model Gibson Les Paul was completely withdrawn from the range in 1961 and replaced by the successor model Les Paul SG developed in the same year . The letters "SG" should emphasize that it is in this guitar to an electric guitar with a solid body ( " S olidbody G uitar" ). The most noticeable difference to the design of the Les Paul was the body cutout on both sides of the fingerboard (double cutaway ) . This should give the SG a modern look and make the high frets easier to play.

The guitarist and sound engineer Lester William Polfus (stage name "Les Paul"), who gave the Gibson Les Paul its name and co-developed it , was dissatisfied with the new SG model. In particular, he disliked the shape of the body ( "Someone will injure themselves on the pointed horns" ). He found the horns a hindrance to his fast game. Since Les Paul's contract with Gibson expired in 1962, he officially withdrew. The model name "Les Paul SG" was then shortened to "SG". In later interviews, Les Paul recalled that the main reason for his retirement was actually not so much the unloved new form of SG, but the upcoming divorce from his wife and duo partner Mary Ford . Les Paul feared high maintenance payments to his still wife and was not interested in a lucrative contract extension with Gibson. Higher income would have meant higher payments for Les Paul, which is why he almost completely withdrew from the music business at that time.

When demand for the original Les Paul model increased again in the 1960s, Gibson took this guitar back into the range in 1968 . Since then, the SG and Les Paul models have been produced in parallel.

Body and neck of the guitar consist almost entirely of mahogany , only the set-in neck into the body carries a fingerboard made of rosewood . The body is lacking in comparison to the Les Paul's glued on ceiling of maple . The body is also smaller and thinner, which makes the guitar very light compared to the Les Paul. The scale length is usually 24.75  inches (628 mm).

Initially, “PAF” humbuckers served as pickups , which were later replaced by the more modern 490R and 498T models. More versions of SG have different Tonabnehmerbestückungen as P-90 - Singlecoils (model "Special") or up to three humbuckers (model "Custom").

The guitars of the first years of construction were equipped with a vibrato system in which the lever is moved sideways (parallel to the pickguard). From 1963 the more popular Maestro Vibrola was used , and more rarely a Bigsby . Since the early 1970s, SGs have usually had a stop- tail tailpiece like a Les Paul.

The SG models are based on the different versions of the Les Paul. In addition to the "Standard" (two humbucker pickups with chrome caps , simple beige-colored binding (binding) on the fingerboard , fretboard inlays in a trapezoidal design, chrome-colored hardware), the "Custom" model is available, which is primarily optically enhanced (multiple beige / black striped binding around the headstock, gold-colored hardware , partly an ebony fingerboard, fretboard inlays made of block-shaped mother-of-pearl, partly three humbucking pickups ). The lower price segment is served with various models from the “Special” and “Junior” series, which are mostly optically and technically simpler (missing binding , P90 pickups , “dot inlays” etc.).

Gibson also built some electric basses with the same body shape, the EB-0 with a large humbucker on the neck and the EB-3 with an additional small humbucker on the bridge. Like all early Gibson basses, these models also had a short-scale scale of 30.5 inches. The EB-3 was best known in the late 1960s through the Cream bassist Jack Bruce , but ultimately did not achieve great popularity due to the special sound behavior: Although these models provided an enormously strong load due to their full mahogany construction and the pickups Sound with a fundamental deep bass, but the sound lacked treble and brilliance. Many of the bass systems of that time could not transmit this bass sound with adequately firm contours, which resulted in a rather dull, booming and undifferentiated sound.

In addition to Gibson itself, Epiphone , which belongs to the Gibson Group, also offers various SG models. The product range extends from inexpensive entry-level instruments with screwed or glued necks to high-quality copies from the Elitist series made in Japan . The Epiphone SG G-400 model is a copy of the Gibson SG Standard from 1961, the Epiphone G-310 model is a replica of the Gibson SG Special .

The Gibson SG in music 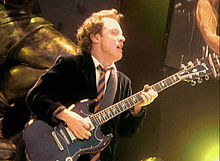 Thanks to the humbuckers, the Gibson SG also has a warm, powerful sound that is typical of Gibson instruments. Due to the thin, solid mahogany body, the sound of the SG is usually much more direct and percussive than the other models. For this reason, the SG's tone is particularly suitable for distorted sounds in rock music .

Prominent guitarists who play or have played a Gibson SG include Frank Zappa , Carlos Santana , Frank Marino , Tony Iommi from Black Sabbath (left-handed version), Richie Sambora from Bon Jovi , Pete Townshend from The Who (SG Special), Gary Rossington by Lynyrd Skynyrd and Mick Taylor , especially when he was with the Rolling Stones . During his time at Cream, Eric Clapton played, among other Gibson models, an SG that was hand-painted by the Dutch artist group "The Fool". John Cipollina of Quicksilver Messenger Service or Copperhead has been loyal to this type of guitar for almost his entire life. Jerry García of the Grateful Dead and Duane Allman and Dickey Betts of the Allman Brothers Band were intermittent SG players. Rich Robinson of The Black Crowes and Derek Trucks are young guitarists with a penchant for this model. The Berlin artist Manuel Göttsching has also used an SG on all of his albums that feature a guitar since the 1970s and continues to perform with it regularly to this day.

Angus Young from AC / DC , who almost exclusively plays an SG on stage, has become legendary . Young claims to have an extensive collection of guitars of the type that should include a few models from each year. For this reason, Angus Young has two signature SG models and a “Tribute” SG model from Gibson. Other signature instruments have also been made for Townshend, Iommi and Robby Krieger by The Doors .

Jack Bruce of Cream belonged in the 1960s alongside Andy Fraser of Free and Felix Pappalardi of Mountain of the few famous musicians, a SG-Bass used. Jim Lea ( Slade ) played a modified EB 3 in the 1970s / 80s . His bass had a third pickup. In addition to his Fender guitars, Mike Oldfield also played SG Juniors, of which he owned three models (1962, 1963, 1966), one of which was retrofitted with a guitar synthesizer; In 2006, Oldfield sold two of his SG Junior guitars to charity.

The Gibson SG has also become known in console games. In the game Guitar Hero II , a 3/4 scale Gibson SG is used as a guitar controller.