Peter Dennis Blandford "Pete" Townshend (['taʊns.end], born May 19, 1945 in Chiswick , London ) is a British musician and head of the rock band The Who . He wrote the majority of the group's songs, plays electric guitar on the albums , occasionally also keyboards and sings background . His live performances were notorious in the 1960s and 1970s , at the end of which he often destroyed the band's instruments together with The Who drummer Keith Moon . His aggressive guitar style influenced the development of hard rock , heavy metal and punk music styles . 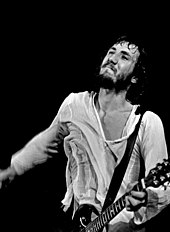 Pete Townshend was born as the first son of big band saxophonist Cliff Townshend and former singer Betty Vera Dennis. While still at school, he joined his friend John Entwistle's school band . Their first joint appearance took place in 1959 in a church youth club in Acton. The band was called The Confederates and was a Dixieland quartet with Townshend on banjo and Entwistle as brass.

After the Confederates and other short-lived formations, Entwistle switched to The Detours , a skiffle band with sheet metal welder Roger Daltrey as the front man , now equipped with a self-made bass . Townshend followed the friend at his intercession. As The High Numbers it came to the first unsuccessful singles releases. The Who emerged from this under Townshend's leadership . Townshend became the group's songwriter, writing over 100 songs that appeared on the band's ten studio albums.

An important source of inspiration for much of his work was Townshend's belief in the Indian guru Meher Baba , who combined elements of Buddhism and Sufism ( Islamic mysticism ) with Christian concepts.

In addition to his work with The Who , Townshend was active as a solo artist. From 1969 he recorded eight studio albums and three religious albums. Between 1969 and 1977 Townshend worked closely with Ronnie Lane , bassist for Small Faces , who was also a fan of Meher Baba. Another side project to The Who was the founding of the band Thunderclap Newman , whose only album Hollywood Dream (1970) with Something in the Air even had a number 1 hit in the UK, which not even The Who managed. However, due to differences during the following tour, the band soon broke up.

Townshend's drug and alcohol consumption increased massively in the late 1970s since the 1960s. In 1981 he almost died of an overdose . He addressed his alcohol problems on his 1980 solo album Empty Glass .

Townshend also recorded eight live albums, including one with Deep End , a group that only existed for three live concerts and one television show to raise money for drug addicts. In 1984 Townshend published a collection of short stories called Horse's Neck . Rumors also surfaced that he wanted to write an autobiography. In 1993 he and Des MacAnuff wrote a Broadway adaptation of The Who album Tommy and a somewhat less successful musical based on his solo album The Iron Man . MacAnuff later turned this musical into the cartoon The Iron Giant .

In 2003, Pete Townshend began publishing a serialized literary story on the Internet under the title The Boy Who Heard Music. In it, a fictional narrator named Ray High describes the story of three young friends who were friends and who founded the band GLASS HOUSEHOLD, with which they successfully released pop music in the 1980s, before devoting themselves to more complex musical things. High tells the story in 2035 when he (himself with Alzheimer's disease) tried to save his memories from disappearing. More than twenty chapters of the virtual book have now appeared on the Internet.

In early 2006, Townshend warned through the press that he had had severe hearing problems from having headphones turned up too far in his long studio work. He was forced to take a break of at least 36 hours between individual studio recordings so that his stressed ears could regenerate.

Townshend now lives in Richmond upon Thames ( England ). He was married to Karen Astley, daughter of composer Edwin Astley , from 1968 to 2000 and has three children with her.

Townshend suffers from severe hearing loss and tinnitus and is certain that this is the result of the loud music to which he has been exposed all his life. For example, the concert at Charlton Athletic Football Club in London on May 31, 1976 is listed in the Guinness Book of Records as the loudest concert ever. 126 dB was measured at a distance of 32 meters from the stage . He saw the beginning of his hearing problems when Keith Moon's drum set exploded during The Smothers Brothers Comedy Hour in 1967.

In March 2019, Pete Townshend announced his book release The Age of Anxiety for November.

Although Townshend was always dissatisfied with his guitar playing, especially with his solos, he is considered an influential guitarist, especially a rhythm guitarist. Innovative was his use of distortion and feedback on The Who first album, My Generation , especially on the title track . Such brutal guitar sounds had previously only been heard by the Kinks ( You Really Got Me or All Day and All of the Night , both 1964). Alongside Ray and Dave Davies , Townshend paved the way for aggressive guitar sounds in the late sixties and early seventies, which eventually led to the development of hard rock and heavy metal music styles via Jimi Hendrix and the band Cream . Hendrix was inspired by his stage appearances, which often ended with the destruction of the guitar. Townshend's stage show is also known for striking the guitar with a twisting movement of the outstretched arm ("windmill technique"). According to his own statement, he copied this technique from Keith Richards in 1963 , who practiced these movements as a relaxation exercise before a performance behind the curtain of the stage.

On later albums of the band (including Tommy ) he demonstrated his acoustic guitar technique, which is composed of elements of flamenco and rock. His long, solo rhythm guitar improvisations on the live album Live at Leeds are also outstanding .

Over the years his solo playing has also changed; Townshend initially focused heavily on rhythm and riffs, but has also used fast solo passages since the 1990s.

Townshend also played keyboards, for example on Who's Next . For the first time, the sounds of the then new synthesizer were put in the foreground on a rock album (for example on the pieces Baba O'Riley and Won't Get Fooled Again ).

His early compositions pinpoint the worries and needs of the British working youth ( mods ) of the time (especially in My Generation ). Townshend also played a key role in the development of the so-called rock opera . For the first time in the history of pop music, the album A Quick One features a series of songs that tell a coherent story ( A Quick One While He's Away ). Townshend is also one of the first to write an album-length rock opera ( Tommy , a year after what is believed to be the first album-length rock opera, SF Sorrow of Pretty Things ).

Townshend mainly used Rickenbacker guitars in the early days of The Who and was certainly influenced in this regard by Beatles guitarists John Lennon and George Harrison . At first he played amplifiers from the Fender company . For his sonic ideas, however, this offered him too little distortion, and so he contacted the then music shop owner Jim Marshall , who then designed the first 100-watt Marshall amplifier , the " Plexi ". With his use of Marshall amps, Townshend set the trend for a large number of harder paced guitarists, and in particular he influenced Jimi Hendrix in this regard. At the end of the sixties, Townshend moved to Gibson SG , which he played at the live gig in Woodstock , among other places . When Gibson ceased production of his favorite SG Special (with P-90 single coil pickups ), Townshend initially bought a large number of the still available copies, but then switched to the Gibson Les Paul Deluxe. After Marshall , Townshend switched to Hiwatt amplifiers (heard on Live at Leeds, among others ) and then mainly used mesa / boogie in the studio from the end of the seventies . In the meantime he has been using almost the same equipment live for years, namely several guitars of the type Fender Stratocaster "Eric Clapton", modified with a "Fishman Powerbridge" and an " EMG Preamp"; thus the guitar is a stereo guitar. He uses these guitars in different tunings with a Fender Vibro-King amplifier.