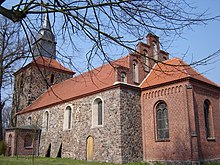 Since July 1, 2009, Gladau has been part of the city of Genthin in the Jerichower Land district in Saxony-Anhalt .

Gladau is located on the southwestern edge of the Fiener Bruch , surrounded by agricultural land. The state road 54 leads through the village with a connection to the federal roads 1 and 107 . The district town of Burg is 20 kilometers away. The Theesen junction of Autobahn 2 is 14 kilometers away. An extensive pine forest area extends to the west of the village.

The place is of Slavic origin. When Germanic tribes settled the East Elbe region in the 12th century , they founded their own village next to the Slavic settlement. Until the two places grew together, the German part was called Groß-Gladau, the Slavic Klein-Gladau. In the first documented mention of 1345, however, only Gladow is mentioned (according to other sources also Glade). In 1506, Lippold von Arnim , who lives in Zehdenick in Brandenburg , bought numerous goods from the Hohenseeden region in the Archdiocese of Magdeburg, including Gladau. Gladau remained in the possession of the von Arnim family until it was acquired by the Prussian King Friedrich Wilhelm I in 1737 and served as the royal court chamber property until 1818. Since the Prussian district division around 1660, Gladau was part of the Jerichow district, with the administrative reform of 1815 the place came to the district of Jerichow II with the district town of Genthin. Since the new traffic routes that arose around the middle of the 19th century did not touch the place, it remained agricultural as in the past. Neither the road to Hohenseeden built at the end of the century nor the Güsen – Ziesar railway line opened in 1917 through Gladau brought about significant changes in the economic structure. The population rose from 590 in 1910 to 756 in 1939. On September 30, 1928, the Gladau manor district was combined with the Gladau rural community.

On July 1, 1950, the previously independent municipality of Dretzel was incorporated. In the course of the GDR territorial reform, Gladau came to the Genthin district in 1952 . With the two districts of Schattberge and Dretzel, Gladau had 1,079 inhabitants in 1964. In the course of the district reform of 1990, the place was incorporated into the district of Jerichower Land. On May 29, 1999, passenger traffic on the Ziesar – Güsen railway was shut down.

On July 1, 2009 Gladau was incorporated into the city of Genthin together with Paplitz and Tucheim . The Genthin administrative community , to which Gladau had belonged until then, was dissolved at the same time.

In the local cemetery there are the graves of six murdered men who were either Soviet prisoners of war or inmates of a forced labor camp near Güsen during the Second World War and who were shot while trying to escape.

The last municipal council of Gladau elected on September 5, 2004 consisted of 10 councilors.

Coat of arms of Gladau

The last honorary mayor, Bernhard Schwandt, was elected for the first time on November 4, 2001.

Blazon : "In silver, growing out of a green three-mountain topped with a silver wavy bar, a green olive tree with a leafy fork of a branch, in between a red flying dove."

Gladau did not have an officially approved coat of arms until 1997, but used a coat of arms-like emblem. This signet shows the dove rising from an olive tree as a symbol of Christian proclamation, as it happened according to tradition in the Old Testament.

It can be assumed with certainty that the representation of the above symbolism in the Gladau seal was once correct. In the course of time, however, the actual meaning was neglected and the seal image was used in the wrong colors and with written additions to the coat of arms. Since there was a legal vacancy for this in GDR times, its use did not violate applicable law. That has changed with the legislation of the Federal Republic of Germany. The coat of arms had to be corrected and approved. The municipal heraldist Jörg Mantzsch was responsible for the implementation and incorporation into the approval process .

old seal of the community of Gladau

The community of Gladau already had a coat of arms-like seal image in its community seal. This was used in the period after the Second World War until around the introduction of the districts and counties in the GDR (1945–1952). Another source is the County Home Museum in Genthin.

Localities and districts of Genthin