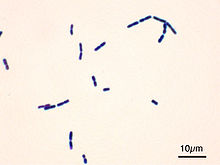 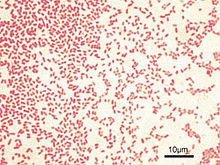 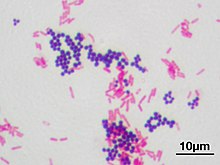 The Gram staining (or Gram stain ) is the Danish bacteriologist Hans Christian Gram developed method (1853-1938) for differentiating coloring of bacteria for microscopic examination. It enables bacteria to be divided into two large groups that differ in the structure of their cell walls. A distinction is made between gram-positive and gram-negative bacteria. However, not all species of bacteria by this technique classifies be, so there are Gram variable and Gram-indeterminate species.

The Gram stain is a valuable diagnostic tool in scientific and medical microbiology : With its help, bacteria can be easily differentiated according to the structure of their cell wall , since the different colorability of bacteria is based on their chemical and physical properties. The difference in the structure of the cell wall is an important systematic distinguishing feature in bacteria, so the differentiability using Gram staining serves as a taxonomic feature.

Important Gram staining is in the diagnosis of infectious diseases . Gram-positive and gram-negative bacteria can often only be combated with different antibiotics . After the bacterial smear has dried (about 5–15 minutes, depending on the type of material) and fixed (usually heat fixation by briefly pulling it three times over a strong flame (Bunsen burner)), the “grief behavior” is determined in about five minutes. This means that the doctor can start antibiotic therapy immediately before the result of the culture of pathogen cultivation lasting at least 24 hours with the following determination is available.

In the Gram-staining of the bacteria with a basic dye (usually after staining crystal violet ) by treatment with Lugol's solution (containing an iodine - Potassium iodide - complex ) a dye-iodine complex formed in the bacteria. In contrast to the primary dye, this color complex is insoluble in water. In contrast, it is soluble in ethanol and is therefore extracted from gram-negative bacteria by treatment with ethanol. Because of the thicker murein layer , on the other hand, it is not extracted from Gram-positive bacteria under the conditions of Gram staining by ethanol.

The treatments with Lugol's solution and with alcohol are the crucial steps in Gram staining.

Causes of the different coloring behavior

The difference in the Gram staining is due to the structure of the cell wall:

The following short tests can be used to distinguish bacteria based on the same cell wall characteristics as with Gram stain:

A small amount of bacterial mass (from an agar culture) is suspended in a drop of 3% potassium hydroxide solution . In the case of gram-positive ones , this lye is too weak to lyse the cell wall . If you pull a needle or toothpick through the mixture, it behaves like a liquid with a viscosity like water (no thread formation can be seen). The cell wall of gram-negative bacteria, on the other hand, is much thinner and is lysed by the potassium hydroxide solution. The cells break open and the DNA is released. If the needle is pulled through this solution, thread formation can be observed due to the increased viscosity caused by the released DNA. It should be emphasized that this is a quick test that is only partially reliable. It is often difficult for beginners to see thread formation. The use of an incorrect alkali concentration can also be a source of error here. If this is too strong, gram-positive bacteria will also be lysed . On the other hand, if it is too weak, gram-negative bacteria are not lysed either. 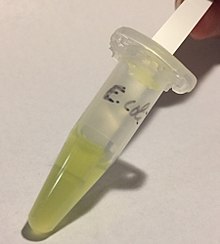 Escherichia coli with a positive result in the aminopeptidase test, the substrate L -alanine-4-nitroanilide contained in the test stick was cleaved and 4-nitroaniline was released.

The aminopeptidase test is based on the fact that the enzyme L-alanine aminopeptidase , with a few exceptions, can only be detected in gram-negative bacteria. A small amount of the bacteria to be examined is suspended in a test tube or micro-reaction vessel in a little sterile , distilled water . For detection, L -alanine-4-nitroanilide is used, which is cleaved by the enzyme with cleavage of an amide bond into L -alanine and the yellow-colored 4-nitroaniline. Thus, a yellow coloration of the suspension indicates the presence of a gram-negative bacterium. Industrially manufactured test strips are available for this reaction. It is advisable to always include a negative control in order to have a comparison. In addition, the test can only be used for bacterial colonies without a strong inherent color.

The Danish physician Hans Christian Gram developed the staining method as an employee at Carl Friedländer in Berlin. He was looking for a staining method with which bacteria can be represented in animal tissues, i.e. stained in a way that contrasts them with the tissue cells. The found staining method, published in 1884, was only successful with some bacteria, the gram-positive ones. Émile Roux applied the method to differentiate gram-positive and gram-negative bacteria by dyeing, in particular to determine gonococci (gram-negative in contrast to many other cocci) (published in 1886).

Scientists at Harvard University in Boston (USA) have developed the Gram stain into a magnetic detection method. After coloring with modified crystal violet , magnetic nanoparticles are attached to the dye. The bacteria can then be detected using NMR devices and separated magnetically. The advantage of magnetic detection is its high sensitivity. With the help of miniaturized micro-NMR devices, a rapid and sensitive on-site diagnosis is conceivable.