Hegnach has been part of the district town of Waiblingen in the Rems-Murr district since January 1, 1975 . The place is characterized on the one hand by agriculture - for example, it used to be a well-known peppermint growing area - on the other hand, it serves as a " dormitory city " for industry in the Stuttgart region .

Hegnach is three kilometers north of Waiblingen and high above the Remstal on the edge of the Schmidener Feld . The Rems has dug itself into the shell limestone and runs in natural turns deep below the village. 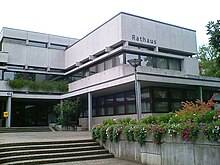 The oldest finds in Hegnach date back to the Neolithic Age (approx. 4000 to 1800 BC), from which some artifacts were found nearby. Some barrows in the Hartwald near Hegnach, as well as some other finds, date from the Celtic era . The place name "Hegnach" refers to the Roman ruins overgrown with a dense, bushy "Hag", which was probably used by the first settlers as a quarry to build their houses down the valley in the post-Carolingian period (9th to 10th centuries). A pit in the Burgmäuerle corridor is dated to Roman times, which probably served as a waste pit for a nearby brick kiln.

The first written mention of Hegnach is from the year 1282, whereby the Latin text of the document names the widow of a "Wipreth de Hegnach", who was possibly a member of the local nobility. According to Crusius, a Swabian chronicler in the 16th century, Hegnach is said to have belonged in ancient times to the Junkers von Schilling from the noble Cannstatt family, who later sold it to the city of Waiblingen, while Cannstatt to the Counts of Württemberg. The Junkers von Staig have been documented as local nobility since the middle of the 14th century; in 1410 they became feudal men of the Counts of Württemberg. In the middle of the 15th century, Hegnach came into the possession of the Dürner von Dürnau family, who sold it to Württemberg in 1467. In the 16th century, Hegnach gained a not inconsiderable national importance through its sheep farm. The ducal vault administrator and former musician Wolfgang Ganß acquired the three Hegnacher Schafhöfe from 1519, which from now on called "Ganßische Höfe", were converted and expanded by the famous Swabian master builder Heinrich Schickardt . At the same time, Schickardt found time to sketch the Remsbrücke in Hegnach; this sketch is preserved in the main state archive. Schickardt was friends with Wolfgang Ganß, with whom a brief but significant period in Hegnach's history began.

After the Thirty Years' War , Hegnach was almost completely deserted and deserted, and it took the place over 100 years to recover from the effects of this war. It was not until the beginning of the 19th century that Hegnach began to develop again. However, there were natural limits to this, as the marking area was relatively small and the rapidly growing population soon no longer offered adequate supplies.

In the middle of the 19th century, as elsewhere, many people in Hegnach moved to renounce their bleak existence and try their luck abroad. Above all the North American continent, often hardly cultivated and in the paradisiacal state of the "Wild West" - today's metropolis Chicago was z. B. still a small village, hardly bigger than Hegnach. Between 1816 and 1882, the residents of Hegnach emigrated to America, Algeria, Africa and Australia.

By cultivating the now well-known Hegnacher peppermint, attempts are being made to stimulate commercial activity.

At the turn of the century, due to the beginning of industrialization in Waiblingen, Fellbach and Cannstatt, Hegnach began to transform itself from a predominantly agriculturally structured community to a residential community with around 4,500 inhabitants today. This development has continued until recently and has led to the development of new residential and commercial areas, the construction of a new school (1955), new churches, a new town hall (1968) and other similar construction projects.

On January 1, 1975, Hegnach was incorporated into the district town of Waiblingen.

There is a full-time mayor elected by the Waiblingen municipal council in the village. The false suburbs , introduced in 1975 with the incorporation, were abolished again in the 2004 local elections.

Introduced with the incorporation in 1975 Ortschaftsrat has since the local elections of 13 June 2004 a total of 12 seats. The local council is re-elected every 5 years.

The first coat of arms that was used in Hegnach around 1900 was the Nikolaus seal of the Catholic Church. From 1905 it was replaced by the shepherd's seal of the Protestant church, since Hegnach was a purely Protestant community from that time. After the rediscovery of the Nikolaus seal in 1955, in agreement with the main state archive in Stuttgart, consideration was given to including the Nikolaus, possibly even the coats of arms of the medieval gentlemen Hegnachs, in a local coat of arms to be awarded again. Since the shepherd picture is already over 50 years old and ties in with a no less long local tradition such as Saint Nicholas, the municipal council decided to keep the shepherd, albeit with a few minor color-related changes. Therefore Wilhelm Nisi was commissioned to design a new coat of arms. The municipality of Hegnach was officially awarded the Schäfer coat of arms by a document from the Ministry of the Interior of Baden-Württemberg on February 16, 1967.

“The coat of arms shows a shepherd dressed in black on a green ground, underlaid with a silver sheep standing to the left and looking. The shepherd's right hand holds a shepherd's shovel with a blue leaf and red shaft, the left hand rests on the sheep's head ”. The sheep is depicted entirely within the contours of the shepherd. 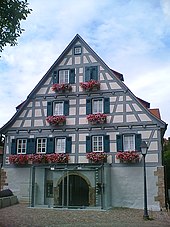 The demanding series “Music in Hegnach” has been well received by the public. The concerts take place in the Schafhofkeller or in the Nikolaus church.

The landscape painter Wilhelm Nisi, who loved to paint pictures from the lower Rems Valley, lived and worked in Hegnach from 1926 until his death in 1977. 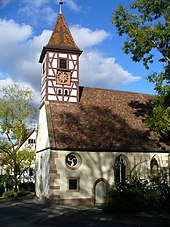 The Nikolaus Church, built in 1487, with an older choir has beautiful wall paintings from the 15th century. Today it is a Protestant church.

Hegnach still has a half-timbered building, the Schafhof with a cellar that has been beautifully restored and where events take place today.

The Jägerhaus, built in 1738/40, has been owned by the Kayser family for generations and is the largest agricultural property in Hegnach. The Kayser family was the first to run a progressive four-field economy. She planted peppermint, hops and fine fruit.

After 1945 the change in the population structure, partly due to the admission of many refugees, took place in the form that in 1950 three quarters of the employees were already working outside of agriculture. The development of the local handicraft businesses increased in a roughly comparable manner. Between the two world wars, it was mainly the building trade (carpenters, bricklayers, roofers, plasterers and artificial stone manufacturers) that received orders in nearby Stuttgart. The reconstruction after the war and the rapidly developing housing construction enabled a further expansion of all building trade branches, in addition there were companies in the motor vehicle trade and, with the development of industrial areas, machine and tool shops as well as some important food distribution centers and customer service points. Today in Hegnach there are also electronic and automation technology, measurement technology, hydraulics and international wholesalers.

In addition to the advantage of greater tax power for the community through this growth in the industry, the creation of jobs was particularly important. The “Handels- und Gewerbeverein Hegnach e.V.” was founded by tradespeople and freelancers. V. “was founded to represent the interests of the local industry.

The trade and trade association organizes the Hegnach Spring every year with Sunday shopping, while the local administration's spring market takes place at the same time.

Hegnach is on the 1142 road from Waiblingen across the Neckar to Ludwigsburg . A second Neckar crossing in the course of the Nordostring Stuttgart should bring relief .

Hegnach is connected to the city center and the S-Bahn at Waiblingen station via various bus lines (213 OVR , 431 LVL, 432 LVL) . After Remseck to the tram to Stuttgart and on to Ludwigsburg the lines 432 (and 213/431 during rush hour). All lines operate at uniform tariffs within the Stuttgart Transport and Tariff Association (VVS).

Hegnach owns a town hall, in which the most important services of the administration are offered to the citizens. In Hegnach there is an indoor swimming pool, as well as a local library (in the town hall) and a sports and multi-purpose hall (Hartwaldhalle) on the sports grounds in the Hartwald. There is also a skate track and a beach volleyball field at the Hartwaldhalle.

In 2005 the Burgschule Hegnach elementary school celebrated its 50th anniversary. In recent years the Burgschule has developed into a primary school with a focus on sports and physical education. The Burgschule sponsorship association, founded in 2004, set up the BuGI (Castle School Whole Day Initiative) and thus offers a flexible range of after-school care.

The municipality of Hegnach has granted the following people honorary citizenship:

Wikisource: Hegnach  - in the description of the Oberamt Waiblingen from 1850