Language regions of the indigenous peoples of Alaska (1970)

A stone flute (Waldo Selden Pratt: The History of Music 1907)

The indigenous peoples of Alaska ( English Alaska Natives ) are Indian tribes from the area of ​​today's US state Alaska , where 225 of the 562 recognized tribes in the USA live. At the 2000 census , 98,043 people reported being Alaskan Indians (15.6 percent of the total Alaskan population at the time).

Today's Indian tribes on the south-east coast and inland are descendants of the Paleo-Indians who immigrated from Siberia about 16,000 to 12,000 years ago over the Beringia land bridge that still existed at the time . The Eskimos descend from a later wave of settlements. The ancestors of the Aleutian people settled the Aleutian island chain around 4000 years ago from Siberia.

The peoples belong to different cultural areas and accordingly have considerably different forms of social organization and religious and cultural peculiarities. Some tribes of the Pacific coast are best known for their rich carvings, which are still practiced today.

In contrast to most of the other indigenous peoples on earth, Alaska's needs economy enjoys legal protection

Similar to the Canadian Inuit and First Nations , who are recognized as separate peoples, the indigenous peoples of Alaska are treated differently in some legal areas than the Indians in the rest of the United States . For example, a 1995 amendment to the Marine Mammal Protection Act of 1972 allows them to hunt whales and other marine mammals . They also received land tenure rights that were regulated in the Alaska Native Allotment Act , which was in effect until 1971 , and which differed in parts significantly from those of the Dawes Act , which parceled out the Indian reservation land in other regions of the United States. In 1971, the regulated Alaska Native Claims Settlement Act the area claims of indigenous peoples and transferred property rights to 13  Alaska Native Regional Corporations ( authorities ) and about 200  bodies at the level of so-called Villages .

The traditional subsistence economy ( subsistence management: fishing, hunting, gathering for self-sufficiency) is protected by law and takes precedence over market-economy efforts in these branches of the economy. Especially in the areas of the so-called Alaskan Bush that are not connected to the road network , it is still essential for many families to secure a livelihood . The hunt for whales , which the indigenous peoples are allowed to do under the Whaling Convention , is still part of it. From a global perspective, state support for self-sufficiency is an unusual exception. The regulation of subsistence farming on federally owned areas has been in the hands of the federal government since 1990 through the Alaska National Interest Lands Conservation Act . The importance of self-sufficiency, however, must also be seen in families who do not pursue a market economy, with a view to the so-called "Permanent Fund" of the state of Alaska: Since 1976 every citizen has received a dividend from the state income from the oil industry, usually in autumn averaged $ 1,370 per year from 1998 to 2013.

The tribal administrations of the indigenous peoples of Alaska, unlike the Indians in the rest of the state, do not have the right to collect taxes, as they - with the exception of the Tsimshians - do not have reservations.

The athabasques lived as roaming hunters and gatherers in the Alaska Interior between the Brook Range and the Kenai Peninsula on the Gulf of Alaska . The catchment areas of the five great inland rivers, Yukon , Tanana , Susitna , Kuskokwim and Copper , formed their livelihood.

They moved in small groups of 20 to 40 people and ate fishing, hunting and trapping. In summer camps were set up on rivers rich in fish, in winter the families moved to winter quarters, which served as base camps. 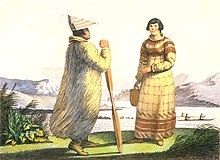 The habitat of the Aleutian and Alutiiq is the Aleutian chain of islands , the Alaska Peninsula and the southern coast of mainland Alaska around Prince William Sound . The basis of food is the resources of the surrounding seas, the northern Pacific and the Bering Sea . With Baidarkas , driftwood, bones and animal skins built kayaks, was hunted at sea.

The Aleutian language split off from that of the Yupik around 4000 years ago . The Alutiiq are divided by anthropologists into three groups, the Chugach on Prince William Sound, the Unegkurmiut on the Kenai Peninsula and the Koniag on Kodiak Island and the Alaska Peninsula. The peoples settled on inland waterways or on the coast of the sea. The trade with other tribes along the coast and also the Athabasques from the region of the Copper River provided a supplement to the one-sided food that the sea provided.

Southeast Alaska and the Panhandle are home to the Eyak , Haida , Tlingit, and Tsimshian . Their culture connects them with other peoples on the Pacific coast as far south as Oregon . There are clear differences in tribal order and language. The region from the delta of the Copper River to the southeastern Panhandle consists of temperate rainforest , which made the sea, the rivers and the inlets of the Inside Passage important transport routes.

The Eyak settled the region on the Gulf of Alaska between Copper River and Icy Bay south of Mount Saint Elias . Farther south-east, between Icy Bay and Dixon Entrance , live the Tlingit, who had spread inland beyond what is now the Canadian border. The Haida, whose original territory is Haida Gwaii , had advanced north to Prince of Wales Island before the first Europeans arrived . 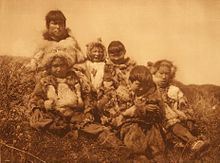 The Central Alaskan Yup'ik live in southwest Alaska on Bristol Bay , in the Yukon-Kuskokwim Delta and on Nunivak Island . At the time of first contact with Europeans, the population was around 16,500. They lived as hunters and gatherers and on the resources of the sea. The Yup'ik and Cup'ik lived nomadically and followed the trails of the game.

The men of the groups and families lived in the seasonal, widely scattered camps in so-called “Qasgiqs” (meetinghouses), where the cultural events were also held. The women lived in "Enas", which were similarly designed but smaller than the "Qasgiqs" and where food preparation took place.

The Inupiat and St. Lawrence Island Yupik were and are hunters and gatherers in northwest Alaska with the Seward Peninsula and in the North Slope on the Arctic Ocean . Their livelihood is based on whale fishing and fishing and the reindeer herds of the arctic tundra . They live in small groups of up to 200 members. The largest ethnic groups at the time of first contact with Europeans were the St. Lawrence Island Yupiit with 1500 people, the Bering Strait Inupiat (1820 people), the Kotzebue Sound Inupiat (3675 people), the North Alaska Coast Inupiat ("Tareumiut", people of the Marine, 1850 people) and the Interior North Inupiat ("Nunamiut", people of the country, 1050 people).

When designing the accommodation, it was common to all groups that the entrance was below the living space to prevent cold air from entering, that the housing was partially embedded in the ground to use the surrounding soil for insulation and that ceramic or oil lamps Soapstone was used to generate light and heat as well as for cooking.