The Jehol Group is a lithostratigraphic unit in northeast China that is open in Liaoning , Hebei , and Inner Mongolia Provinces .

Live reconstruction of Longipteryx chaoyangensis , a bird about 15 cm long ( head-trunk length ) from the youngest member of the Jehol group

This rock package consists of a sequence of laminated to finely layered siliciclastic lake sediments up to 4700 meters thick , in which basalts and tuffs are inserted that come from volcanic eruptions . According to radiometric dating , the Jehol group was deposited during the Cretaceous between 128 and 110 million years ago. It consists of the older Yixian formation and the younger Jiufotang formation . The lower section of the Yixian Formation was, based on controversial age data, classified by some authors in the Upper Jurassic and referred to as the Chaomidianzi Formation .

The wealth of unusually completely preserved animal and plant fossils makes the deposits of the Jehol group the most important continental preservation site of the Lower Cretaceous. The Jehol community is famous for its feathered dinosaurs and primeval birds as well as for evidence of earlier higher mammals and plants with covering seeds (Magnoliophyta, earlier angiosperms), these are the "flowering plants" in the narrower sense.

The increased volcanism during the formation of the Jehol group is not only important for the timing of the sequence using methods of absolute age determination based on the minerals contained in the volcanic deposits such as uranium-lead dating of zirconia and potassium-argon dating of biotite and potassium feldspar , but was also a decisive reason for the extraordinarily good preservation of Jehol fossils: the ashes sealed the fossil-bearing sediment layers of a nearby lake and created an oxygen-poor environment around the dead body, so that bacterial decomposition was delayed. Due to the lack of oxygen, the activity in the substrate of burrowing and scavenging animals was also restricted.
The horizons richest in fossils are therefore below the tuff layers which, when deposited as ash falls, buried most of the living beings (or their carcasses) that were in the water of the lake during the volcanic eruption.

An overview of the vertebrate faunas of the Jehol group: 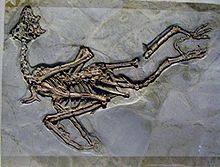 A substantial part of the knowledge about birds of the early Cretaceous period is based on finds from the Jehol group: The rich avifauna is home to basal (primeval) birds such as Sapeornis and Jeholornis , as well as the Confucius ornithids , a large number of representatives of the Cretan group Enantiornithes (such as e . Sinornis , protopteryx , Longirostravis ) and some early representatives of modern group Ornithurae : Chaoyangia , songlingornis , Liaoningornis , yixianornis and yanornis . The ornithurine birds also include all recent bird orders. Various morphological details and findings of stomach contents show that the birds of the Jehol avifauna already occupied a large number of different ecological niches .

Of particular importance are the finds of very bird-like feathered dinosaurs such as Sinornithosaurus , Caudipteryx and Microraptor , whose fletching shows different stages of feather development. They are direct evidence of the evolution of birds from small theropod dinosaurs.

The seven species of mammals found in the Jehol group so far (as of 2007) belong to different groups:

The genus Eomaia is the most highly developed: It shows the limb proportions of a tree dweller, and the morphology of the pelvic girdle indicates that the young animals were carried in a pouch, similar to today's marsupials . The fossil-preserved ossicles of Yanoconodon allini from the Yixian formation testify for the first time the transition in the evolution of the middle ear from the reptilian stage to modern mammals. 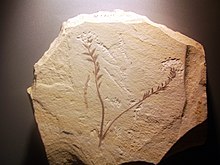 The Jehol flora, which is dominated by conifers , is also home to early representatives of the Bedecktsamer : the " flowers " of Archaefructus have stamens and the seeds are apparently enclosed in a kind of carpel . On the other hand, lack typical features of angiosperms as crown- and sepals . The organ described as the "carpel" is not necessarily considered by some paleobotanists to be homologous to the carpel of the flowering plants . Obviously, Archaefructus is still a side branch of the higher angiosperms, although the exact phylogenetic position has yet to be clarified.

Other finds such as those of Archaefructus eoflora , Sinocarpus and Archaeamphora longicervia have so far confirmed the assumptions that the Jehol flora is home to numerous flowering plants.