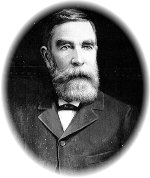 John Jones attended public schools in his home country. After his family emigrated to the United States, he studied at Iowa State University until 1865 . After that he worked for some time as a teacher and in mining. Then Jones came further west as a worker on the Union Pacific Railroad and settled in Eureka in 1869 . He worked there until 1883 as a miner and in agriculture. He was also involved in building the militia in 1876.

In 1883 he was employed by the federal tax authorities in Nevada as Deputy internal revenue collector . He was then elected twice as Surveyor General of Nevada. (At that time this office was still of military importance and could be interpreted roughly as the commander of the volunteer army.) Jones held this office from 1886 to 1894.

In 1895, Jones was elected Governor of Nevada as a member of the Silver Party . He took up this position on January 7, 1895. During his tenure, irrigation programs for agriculture in Nevada were created. The state's first public library was built in Reno . In the fall of 1895, Governor Jones was diagnosed with cancer. He then went to San Francisco to recover, where he succumbed to his illness on April 10, 1896. Governor Jones had two children with his wife, Elizabeth Weyburn.