The Greek island of Kasos ( Greek Κάσος ( f. Sg. )) Forms with the uninhabited islands Armathia , Makronisi and other rocky islets the community of the same name ( Greek δήμος , Dimos ) in the South Aegean region . The 66.419 km² large Dodecanese Island is located about 7 km southwest of Karpathos and about 70 km northeast of Crete , making it the southernmost island of the Southern Sporades . At 601 meters, the Prionas is the highest mountain on the island.

According to the 2011 census, 1084 inhabitants live on Kasos, 357 of them in the main town and port of Fry (Φρυ ( n. Sg. )). The largest village in terms of population and area is Agia Marina (Αγία Μαρίνα) with 444 residents, southwest of Fry at an altitude of about 150 meters. The other villages are Arvanitochorio (Αρβανιτοχώριο), Poli (Πόλι), Panagia (Παναγία) and Emborio (Εμποριό) as well as the isolated hamlet of Chadies in the far west.

A characteristic of Kasos that defines the landscape is the extremely large number of abandoned terraced areas up to the most remote parts of the barren island. On the one hand, they indicate a much greater population density in the past and, on the other hand, a better water supply. Today Kasos is extremely poor in vegetation, only low Phrygana cover the rocky slopes of the mountains. There is no well that supplies fresh water that does not need to be treated. 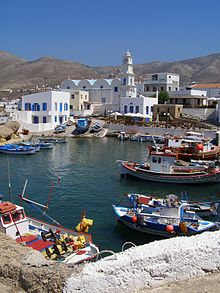 The old port of Fry

Even the Minoans of the pre-palace period had trade contacts to Kasos, the island was also known to the Phoenicians . The remains of a Minoan settlement have been found in the well-protected “Chelatros” bay in the south of the island. The earlier name of the island "Aphros" ("foam") probably refers to the north coast of the island, which is mostly foamed by high waves. Seafaring and trade remained the economic basis of the island until the 19th century, which was also able to achieve a certain degree of wealth.

This enabled the islanders at the time of the Greek War of Liberation in 1821 to put their 100 ships in the service of the Greek Revolution . The Turks then pulled together a fleet of 45 warships on the small neighboring island of Armathia off Kasos in 1824. Under the direction of Admiral Ishmael Gibraltar , the island was conquered and almost depopulated after sustained artillery fire. The Turkish occupation was replaced by the Italians in 1912. This forbade the "liberated" residents of Kasos to hoist the Greek flag, who then resorted to brush and paint in an act of civil disobedience and painted every whitewashed surface with the Greek flag. It was only after the Second World War and the withdrawal of the Italian occupation that Kasos was united with Greece in 1948.

Since the beginning of the 21st century, the economic basis of the islanders has been in a state of upheaval: With funds from the EU and the Greek government, the conversion from fishing and agriculture to tourism as the main source of income is being pushed.

The ferry line Piraeus- Crete-Rhodes ( LANE-Lines ) calls at Kasos three times a week. There is also a local connection to Karpathos, which is daily during the season, with a small ship without the possibility of car transport.

The paths between the places are all paved, even the remote beach of Chelatro and the 400 m high monastery of the island's popular Agios Mamas (Άη Μάμας) can be easily reached. In the port of Fry there are car rentals, a few hotels and guest houses, travel agencies and internet cafés.

The lack of spectacular beaches or sights kept tourism away from Kasos until the end of the 20th century, but at least as a day trip destination from Karpathos it has now established itself in Fry. The tranquility and originality were recognized as attractive for tourists, and many houses were restored in the traditional style.

It is served by Sky Express with flights to Karpathos and Rhodes .