The small fort in Werthausen was a Roman fortification on the Lower Germanic Limes . Today's ground monument is located in Werthausen , a district of Hochemmerich , in the Duisburg district of Rheinhausen on the Lower Rhine . As the successor fort to the Asciburgium auxiliary camp , which was abandoned around 83/85 AD , it monitored the Ruhr estuary on the right bank of the Rhine from the end of the first to the middle of the third century AD . 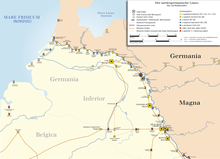 Today's soil monument is located on the north-western edge of the modern settlement of Duisburg-Rheinhausen, around 700 m from the current bank of the Rhine. It is located at the southern end of the so-called "Essensberger Bruch", a silted arm of the Rhine. The fact that it is located inside the old channel shows that this arm, which initially made the forerunner fort in Asberg navigable, must have silted up at the time the Rheinhausen garrison was built. In the time of its existence, the small fort in Werthausen was located directly on the right bank of the Rhine, in the so-called Essenberg Meander, and not, as assumed until 2018, opposite the confluence of the Ruhr into the river, which was further south than it is today. This estuary was of strategic importance because it represented an important potential point of failure for Germanic raids, but it was also important in terms of traffic geography, as the presumed forerunner of the medieval Hellweg began here, an old trade route that led deep into the east of Germania Magna .

The fort square, popularly known as "Steinbrink Castle", was discovered and excavated in 1891 and first published in 1892 by Constantin Koenen in the Bonn yearbooks .

The fort, laid out in the form of a slightly shifted rectangle, was surrounded by a 1.2 m to 1.3 m wide defensive wall. With its dimensions of 38 m by 44 m (internal dimension), the wall encompassed a usable area of ​​just under 0.17 hectares. In its strongly rounded corners, there were defensive towers with trapezoidal plans that protruded 2.2 m deep inward. The entrances to the two-gate facility with drawn-in cheeks were located on the eastern narrow side facing the Rhine and on the western narrow side. They were connected by what was probably the only road in the camp. On each side of the camp street there was presumably an elongated crew barracks built in wood or half-timbered construction. Approximately in line with the street, shifted a little to the south, a cistern with a floor plan of 2.50 m by 3.70 m was found.

The name of the troops that occupied the small fort is not known. The size and structure of the camp speak for a vexillatio in the strength of a maximum of two centurions , i.e. a maximum of 160 men, who may have been assigned from the nearby legionary camp Vetera II .

The small fort of Werthausen took over part of the functions of the Alenkastell in Asciburgium . After this had been given up around the years 83/85, it was probably necessary to control the geographically and strategically important mouth of the Ruhr on the opposite bank of the Rhine from another point. Therefore, in Flavian times, perhaps immediately after the Asberg garrison withdrew around the year 85, which would be supported by some of the finds from Rheinhausen, the Rheinhausen fortifications were built towards the end of the century at the latest. It did its job for around 150 years and was abandoned around the middle of the third century.

The small fort Werthausen is a ground monument according to the law for the protection and maintenance of monuments in the state of North Rhine-Westphalia (Monument Protection Act - DSchG) . Research and targeted collection of finds are subject to approval. Incidental finds are to be reported to the monument authorities. The previous find material from Rheinhausen - if it has not been lost over the decades - is in the magazines of the Duisburg Cultural and City History Museum .