Mérida (full Spanish name Santiago de los Caballeros de Mérida ) is the capital and commercial center of the state of Mérida with 317,410 inhabitants (as of 2013) as well as the tourist and university center of the Venezuelan west.

Mérida is characterized by its valley location in the Andean highlands . The center is located at an altitude of 1630 meters on an alluvial terrace between the Río Albarregas in the west and Río Chama in the east. It is bounded by two mountain ranges, the Sierra Nevada in the southeast and the Sierra La Culata in the northwest . In close proximity to the city and within sight is the highest mountain in Venezuela, the year-round covered by a shrinking glacier Pico Bolívar (4981 meters).

The next big cities are San Cristóbal in the southwest, Valera in the northeast, Barinas and Guanare in the east.

Because of its location on a terrace in a valley, the city did not have many opportunities for development and has therefore grown quite wildly. Only the colonial-style center is arranged with eight avenues in east-west direction and 40 streets in north-south direction.

The rest of the city is oriented along the main arteries (such as the Transandina and the connection to the Panamericana and other arteries). In the southeast, the city already stretches within two kilometers of the neighboring town of Ejido .

Despite the limited space for urban development, Mérida has the highest proportion of green space per inhabitant in Venezuela because of the large number of its squares and public parks.

Mérida was founded on October 9, 1558 by the Spanish captain Juan Rodríguez Suárez (at today's location of San Juan de Lagunillas ). He gave her the name of his hometown of the same name in western Spain, Mérida . He also named the rivers after the rivers of the Spanish Mérida Albarregas and Guadiana (the latter was later renamed Chama ).

In 1622 Mérida became the capital of the state and in 1778 the seat of a bishopric . This contributed to the construction of a seminary that was converted into the Universidad de Los Andes in 1811 .

As in all Venezuelan cities, Plaza Bolívar is the heart of the city. On its west side is the cathedral of Mérida , which was completed after construction began in the 19th century in 1960.

Mérida's biggest attraction is the Teleférico de Mérida , a cable car to Pico Espejo (4,765 meters). It leads from the center of the city to the glacier region of the Andes. In four sections, a difference in altitude of almost 3,200 meters and a distance of more than 12.5 km is mastered (making it the highest and second longest in the world).

In August 2008, however, the cable car was closed due to serious signs of wear. The cable car has been undergoing a complete renovation since 2011; the first two sections of the route were opened in 2014, the entire cable car in October 2016. The cable car was built by the Austrian company Doppelmayr / Garaventa. The individual stations resemble magnificent halls: In the Montaña station there is a bar with a white marble counter and red designer furniture. One station up is a concert hall. Due to the economic crisis and the resulting lack of tourists, only 480 visitors came in the first half of the year after the opening.

The start is at the " Plaza Las Heroínas ", which was built in memory of 5 " Merideñas " (women from Mérida) who fought for independence.

The “ Mercado Principal ” is a market hall on Avenida Las Américas (just outside the center), in which handicrafts and typical goods of the region (together with gastronomic products) are offered.

In addition, the “ Heladería Coromoto ” is located in the city center , an ice cream parlor that was included in the Guinness Book of Records due to its wide range of ice cream flavors (more than 800 different, of which around 75 to 100 are permanently available) . These include such unusual ice creams as trout or garlic.

The Mérida Botanical Garden contains the largest collection of bromeliads in South America.

The Sierra Nevada and La Culata National Parks as well as a large number of mountain lakes such as Laguna Mucubají , Laguna Negra and Laguna Tapada are in the vicinity .

The mountain hotel Los Frailes is located 75 km from Mérida at an altitude of 3,100 meters . It was built as a monastery in the 17th century. The preserved bell tower is the hotel's landmark. 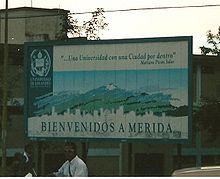 "A university with a city inside" The Universidad Andina's self-image

Mérida is the location of the second oldest university in the country, the " Universidad de Los Andes " (ULA), with around 44,000 students (as of 2006).

It has its origins in a seminary founded on March 29, 1785, which was converted into a (ecclesiastical) university (called Real Universidad de San Buenaventura de Mérida de los Caballeros ) on September 21, 1810 . In 1832 it was transformed into a secular university and in 1883 it was given its current name (ULA).

The range of courses at the university, which is spread across the city, includes numerous subjects in the humanities, natural sciences and engineering. The ULA maintains u. a. a student exchange program with the Department of Applied Linguistics and Cultural Studies at Johannes Gutenberg University Mainz in Germersheim.

Mérida is home to the National Center for the Development and Research of Free Technologies (Cenditel) , which opened on November 10, 2006 . This new research center was created in collaboration with the Foundation for the Development of Science and Technology (Fundacite Mérida) of the State of Mérida with researchers from the Universidad de Los Andes and is under the responsibility of the Ministry of Science and Technology . The center opens up a new space in the discussion about the use and development of free technologies ( free software , open source , free hardware , open standards ) and promotes their research and development.

Although Mérida has always been one of the most important cities in the Venezuelan Andes, it had relatively few inhabitants compared to many other cities in the country. At the beginning of the 17th century, around 4,000 people (around 3,300 Indians and around 150 families of Spanish descent) lived in the city and this rose to just 5,000 inhabitants by the beginning of the 19th century.

This slow increase in population lasted until the middle of the 20th century; thereafter it rose faster and, for example, tripled from 1971 in just three decades (74,000–205,000). This is in large part due to the rural exodus of the local farmers, as well as the good reputation of the university.

The "Merideños" (or all inhabitants of the Andes) are also called " Gochos " (pronounced as Gotschos ) in the rest of the country .

Traditionally, agriculture played a major role in the city (from which goods were distributed throughout the state). There were large haciendas in the area that grew sugar cane.

The city's culture is very much based on the " Andean folklore ". Mérida is the most important representative of this folklore in the country.

The most important regional celebration is the " Feria del Sol ", which takes place in February , otherwise the usual Christian celebrations are held.

There are a large number of sports facilities in the city that are also used for national events (such as the Juegos Nacionales Andes 2005 or the Copa América 2007 ).

The largest of these is the Complejo Deportivo Cinco Águilas Blancas , in which the Estadio Metropolitano de Mérida is also located. The local football team Estudiantes de Mérida plays their games there.

The most popular sports are soccer and baseball , but thanks to the city's location, a variety of extreme sports can also be practiced.

Until the middle of the 19th century there were no transport links with the rest of the federal states; only then was the Transandina Mérida connected to the national road network. A second road connects the city to the Panamericana via El Vigía . Other roads lead to neighboring cities in the state.

There are 4 thoroughfares within the city, which run through them lengthways. 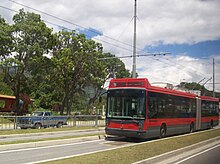 Mérida has an extensive urban bus system that connects the center with the outskirts and covers a large part of the city.

Local public transport is considered to be one of the best in the country, but is facing increasing demand. This is especially true for the main route between the center and the neighboring city of Ejido. In order to do justice to this, the trolleybus Mérida was built, an environmentally friendly mass transport system. The first 10.2 kilometer section was opened on June 18, 2007, but further expansion was slow due to financial problems before electrical operation ceased entirely in June 2016 and the trolleybuses were replaced by diesel buses.

Intercity buses operate regionally and nationally. With the exception of some regional buses , they depart from the city's bus station .

Alberto Carnevalli National Airport, located in the city, was closed to commercial flights on February 21, 2008 after the crash of an aircraft that took off here. Juan Pablo Perez Alfonzo Airport in the city of El Vigia has served as an alternate airport since then. This can be reached by car (taxi) within about an hour and was already used before the accident as an escape point in poor visibility and generally at night. The problematic valley location is to be taken into account by the acquisition of twelve modern aircraft of the type ATR 72 500 and a new airline Merida LAIMA . This is to gradually commence national operations from August 2010. The expansion to an international airport is also being sought.