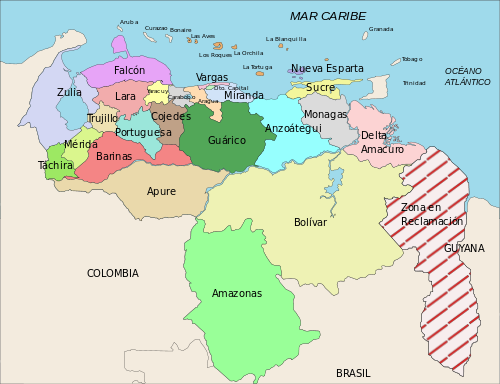 The states of Venezuela with Guiana Esequiba

Venezuela is divided into 23 states (estados) and the capital district Distrito Capital . There are also the so-called Dependencias Federales de Ultramar , which consist of a number of islands dependent on Venezuela.

Before the Civil War (1859–1863), Venezuela was divided into provinces instead of states. The victorious forces wanted to introduce more autonomy for the states, but this was not implemented. From 1863 until the early 20th century there were numerous territorial changes, including numerous mergers and divisions. It was not until the end of the same century that there were three more new states, namely Delta Amacuro , Amazonas and Vargas .