Carabobo is one of the smallest, but at the same time most populous federal states in Venezuela . The area of ​​Carabobo accounts for 0.51% of the area of ​​Venezuela, but the state has about nine percent of the total population of the country. The capital is Valencia .

Before the arrival of the Europeans, this region around Lake Valencia was one of the most important cultural centers in the area that later became Venezuela. The Battle of Carabobo took place on its territory , as well as other important battles in the War of Independence in the 19th century .

The state has many of Venezuela's major industries as well as the country's largest port, Puerto Cabello .

Carabobo is part of the Central region and borders the states of Falcón in the northwest, Yaracuy in the west, Cojedes and Guárico in the south, Aragua in the east and the Caribbean in the north . With its north, west and south banks, Lake Valencia belongs to Carabobo.

The state of Carabobo is divided into the following districts ( Municipios ):

The districts in turn have one or more parroquias ( parishes ). Carabobo has a total of 38 parroquias.

The conversion of the parroquia Miguel Peña , with over 500,000 inhabitants, into a district has been discussed for a long time . 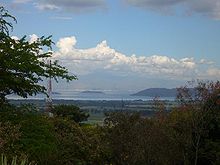 Carabobo has three catchment areas: the Caribbean, Lake Valencia and the South.

The rivers here include:

These rivers form in the coastal mountains and flow into the Caribbean.

The catchment area of ​​Lake Valencia

The following rivers are worth mentioning here:

All of these rivers flowed into Lake Valencia, although the Cabriales is now being diverted to the Paíto.

The main rivers here are the Pao River and the Manaure River. They flow into the Guárico and Portuguesa rivers, which are part of the Orinoco Basin.

Although the state is densely populated, there are large areas where nature has been very well preserved. These include a. the San Sebastian National Park, the mountain regions in the southeast of the state and many mountain areas in the western, especially in the communities of Bejuma and Montalbán.

Carabobo has predominantly tropical vegetation. Mangroves such as the red mangrove and Coccoloba uvifera grow on the coast .

Typical animal species in the state include:

The very rapid population growth of the past 100 years has also accelerated the damage to the local environment. Lake Valencia and several rivers are already showing significant environmental pollution. Black waters are discharged into these waters and the Caribbean without being cleaned up . There are also numerous landfills that do not meet international standards.

Entrance to the Casupo Park, where many hikes start

The most important cultural center of the native Americans in the center of what is now Venezuela was around Lake Valencia . The ethnic groups of the region were hunters, gatherers, but also fishermen and farmers. Many petroglyphs and pottery remains from this period still survive.

In the region that now forms Valencia, the presence of humans has been recorded since the fourth millennium BC. In other regions of Carabobo (such as Bejuma ), archaeological findings have been discovered that indicate an even older human presence.

Archaeologists have found that important settlement around the lake took place between AD 200 and 1000. The inhabitants were already farming.

At the end of the first millennium, Orinoco peoples arrived , probably across the El Pao River. From the eighth century onwards, the Orinoco peoples began to mingle with the settlements around Lake Valencia. This amalgamation formed the cultura valencioide or Valentia culture . The people built their houses on artificial hills in the fertile valleys west and east of Lake Valencia. They mainly made anthropomorphic sculptures.

Around the year 1200 , the Valencian culture reached the entire region around the Basin of Lake Valencia, the center of the north coast of Venezuela and various small islands in the Caribbean. From the islands in the Lake Valencia area, sea products such as large fenced snails , salt (mainly from the Araya Peninsula), turtles and fish from coral reefs were imported. The trade took place through coastal villages.

Taramainas, Tacariguas and other tribes inhabited the area around Lake Valencia when the Europeans arrived. The tribes that inhabited the Carabobo region were predominantly members of the Arawak language family , but also Caribs .

The Indians of the region grew corn , a typical product of western cultures in South America, and cassava , a plant that was cultivated more by eastern Indians. From that time, many metates or stones for grinding mail and budares for preparing kasavah from cassava have been preserved.

The Jirajara , from the region of Nirgua (now the border between Carabobo and Yaracuy ), went east to Lake Valencia and thence through the mountains to Borburata on the coast to get salt.

Alonso de Ojeda and his people were very likely the first Europeans to see this region when they drove west along the coast in August 1499.

Villegas founded the village of Borburata in 1548. He also founded Valencia in 1555. During that time, more and more Spaniards settled in the region. The Indians were driven from many areas or distributed in encomiendas , where they had to work for the immigrants. Many attacks by French and English pirates took place in the 16th and 17th centuries. One of the first actions by these pirates took place in 1555 when the French attacked Borburata for six days.

British pirates, led by John Hawkins, forced the settlers of Borburata to trade goods in 1564.

John Hawkins forced the settlers of Borburata to trade goods with him again in 1568. These attacks resulted in the village being abandoned for years. The settlers went mainly to Valencia.

In 1569 Pedro de Malaver arrived in Borburata with over 500 settlers. He wanted to find a Dorado and found Nueva Extremadura. Between Borburata and Valencia, however, most of the settlers left him and most of them stayed in the region.

In 1577 and 1583, the region of Valencia was attacked by various Caribbean tribes from the Lower Orinoco. Spanish troops led by Garci-González repulsed them.

In 1677, Valencia was sacked again by French pirates and almost all of the city's documents were destroyed.

The Guipuzcoana company from the Basque Country got the trade monopoly for the province of Venezuela in the 18th century. In 1730 the company set up the port of Puerto Cabello .

In 1800 Alexander von Humboldt visited the region on his trip through South America. He wrote extensively about the nature and society of the area.

From that moment on, a war began that would last over ten years. In 1812, Francisco de Miranda and Simón Bolívar fought several important battles in the region. In the following years, Valencia was occasionally occupied by royalists and independence fighters.

On June 24, 1821, the Battle of Carabobo took place. It was one of the most important battles on the way to Venezuela's independence.

Even if other battles followed until 1823, independence was considered relatively secure.

The Spanish troops, which remained in the fortress of San Felipe in Puerto Cabello, left Venezuela on November 10, 1823.

The Monagas family, who held leading positions in the War of Independence, had amassed land holdings for years. This led to protests in 1858 that marked the end of José Tadeo Monagas' government. In the following months there were many uprisings by poor people in Carabobo and other regions of Venezuela, who felt disappointed against the new rulers because they believed that they had betrayed the ideals of the uprising (including distributing land).

On December 31, 1858, the constitutional assembly took place in Valencia. Then the constitution of 1858 was passed, which led to certain concessions for the poor: the right to vote for all men was introduced and slavery was forbidden.

In 1917 and then in 1933, the Venezuelan government made several border changes between the states of Aragua and Carabobo, with Carabobo losing territories to Aragua.

During the reign of Juan Vicente Gómez (and until his death in 1935) large parts of the region were in the hands of friends of the President.

On March 31, 1941, the crew of several Italian and German ships that were in Puerto Cabello decided to destroy their ships. They thought the Americans would hog the ships. They exploded the ships and there was a big fire in the harbor. Several hundreds of them were detained in Carabobo. However, many of the Italians were released shortly afterwards and have since settled in Venezuela. The German ship had to be towed to an island off Puerto Cabello.

At the end of the Second World War, massive immigration from Europe to Venezuela began. First came many Germans and Eastern Europeans. Carabobo was one of the main targets. On September 2, 1947, the first contingent "A" of immigrants from Germany arrived in Puerto Cabello. Then came u. a. many Ukrainians, Poles and Balts. Later the immigrants were mainly Spaniards and Italians.

In the 1970s, more immigrants came from other South American countries.

Valencia began to develop into an industrial city in the middle of the twentieth century. Many industries emerged, especially in the south of the city and west of it towards Lake Valencia.

In 1989 the first regional elections took place in Venezuela and so the people could for the first time directly elect their governors and mayors. Henrique Salas Roman became Carabobo's first governor.

In 2004, Luis Felipe Acosta Carlez, a military man who supported Hugo Chávez , became governor of Carabobo. The state has been grappling with a rapid increase in crime in recent years, particularly in the slums. Many poor people from the region, but also from other regions of Venezuela and Latin America, have come to Carabobo in recent years. Land occupations emerged in many areas, where hundreds of people occupied private or public land and built slums. This is the case southeast of Valencia, around Naguanagua, north of San Diego and other areas. This has become a political issue.

Carabobo has the most important industries in Venezuela. Agriculture also plays an important role.

On the coast, near Morón , is one of the largest petrochemical centers in Latin America, Complejo El Palito.

The largest University of Carabobo and one of the most important in Venezuela is the Universidad de Carabobo , which has around 40,000 students.

There are also a number of other private universities and colleges, such as:

Among the most important research centers are the FUNDACITE (Foundation for the Development of Technology in Carabobo) and the Universidad de Carabobo, especially the Faculty of Science and Technology. 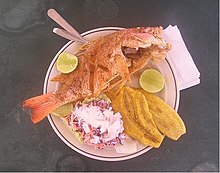 The cuisine in Carabobo shares many components with other regions of Venezuela: Cachapas , Arepas , Hallacas . In addition, there are some specialties of the region such as:

One of the largest sports centers is the Polideportivo Misael Delgado in Valencia. There is also a "Valencia Olympic Villa" between Valencia and Naguanagua .

One of the most important baseball teams in Venezuela are the Navegantes del Magallanes , headquartered in the José Bernardo Pérez Stadium.

Trotamundos de Carabobo is one of the most successful teams in Venezuela.

The Carabobo Fútbol Club is located in the Polideportivo Misael Delgado.

The Velódromo Máximo Romero is the seat of the Asociación Carabobeña de Ciclismo.

Carabobo has one of the best road networks in Venezuela. The main routes are: 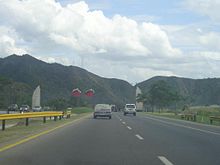 Valencia-Caracas motorway, not far from the border between Carabobo and Aragua

Buses from other regions mainly arrive at the Big Low Center in San Diego. From there there are numerous buses that go to Valencia and other cities in the region.

There is currently a low-traffic train line between Barquisimeto and Puerto Cabello . A railway line is now being built between Valencia and Caracas. 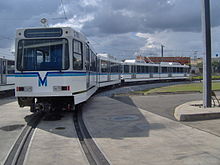 Valencia has a metro. Six stops were in operation at the beginning of 2008, but the subway will connect the entire city from south to north in the following years.

One of the most important ports in Venezuela is in Carabobo: the port of Puerto Cabello . Lake Valencia now only has boats for private use.