Marbach is located in the northeast of the Striegistal municipality, west of Nossen and south of the Freiberger Mulde . To the south-east of the elongated village lies the Zellwald , a large forest area that is cut through by the federal highway 4 and is named after the former monasteries of the old cell and the monastery of Altzella near Nossen. With a length of about 7 km, it is one of the longest Waldhufendörfer in the Free State of Saxony with the districts Rosental and Dreierhäuser . Until the cessation of passenger traffic in 2015, Marbach owned a station on the Borsdorf – Coswig railway line at the “Gleisberg – Marbach” stop . This is located on the opposite side of the Freiberger Mulde in the corridor of the Roßweiner district Gleisberg .

View of the middle Marbach

Marbach was first mentioned in 1264 as Marchbach . This document certifies that the parish has been transferred to the Altzella monastery . At this point in time the village, including the parish and thus also a parish church, had certainly existed for more than 100 years. Like most of the villages in today's Striegistal community, Marbach belonged to the Altzella monastery, founded in 1162, as early as 1185. The parish apparently did not belong to the monastery until 1264. It cannot be ruled out that Marbach was created in connection with the foundation of the Benedictine monastery in Zellwald , which only existed for a short time . There may have been lordship relationships with the late medieval fortifications that formerly existed on the nearby castle hill - here only ceramic finds document the period.

After the Reformation and the associated secularization of the Altzella monastery in 1540, Marbach came into sovereign possession. Until the founding of the Nossen Office, the administration was carried out by former convent inmates for a few years. Subsequently, Marbach belonged as an administrative village to the Electoral Saxon or Royal Saxon Office of Nossen until 1856 . The popularly known structure of Oberdorf, Mitteldorf, Unterdorf and Rosenthal indicates that Marbach originally consisted of several communities, three farming communities and a gardening community that probably emerged much later. This is also evident from a tax register from 1546, in which all property owners, separated according to the individual communities, are listed with name, size of property and tax to be paid. The individual communities bordered one another and grew together. It was similar in Langhennersdorf , Rossau and Altmittweida . In Pappendorf it did not work with the growing together, here there was no formation of a community. The "upper village" is now called Mobendorf .

The following spelling of the place name is documented:

The stream flowing through the Marbach is called Marienbach. The popular derivation of the village name from Maria in connection with the nearby former Altzelle monastery is not tenable from a linguistic point of view. Rather, the place name, as can be seen from the Marchbach spelling from 1264, goes back to the name of the water. Marc (h) bach can be translated as Grenzbach. Marbach is therefore a settlement on the Grenzbach. 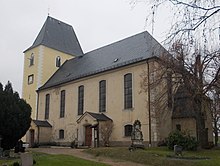 The existence of a parish church probably goes back to the century of settlement. The oldest part is the transverse rectangular early Gothic west tower, which occurs several times in the region. The nave was built in 1770/71 as a simple baroque hall church as a replacement for the previous building, which had become too small. The oil paintings by former Marbach pastors are also worth seeing.

Parts of the municipality of Striegistal