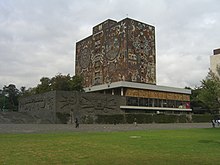 The National Autonomous University of Mexico ( Universidad Nacional Autónoma de México , UNAM for short ) is the oldest and one of the largest universities on the American continent. According to the annual “World University Ranking” of the British consulting firm QS for 2018, it is the third best (and at the same time the largest) Latin American university after the Universidad de Buenos Aires and the Universidade de São Paulo . In a global comparison, UNAM ranks 122nd, shortly after the Humboldt University of Berlin (120th place) and ahead of the Free University of Berlin (125th place). According to a 2005 study by The Times newspaper, UNAM is the best university in the Spanish and Portuguese-speaking countries. In a global comparison, it reached 95th place.

The ensemble of buildings, sports facilities and open spaces of the large campus ( Ciudad Universitaria ) has been declared a World Heritage Site.

On September 21, 1551 presented later King Philip II. On behalf of his father Charles V the Memorandum for the Real y Pontificia Universidad de México from. It was inaugurated on January 25, 1553 by Viceroy Luis de Velasco of New Spain in the Calle de San Ildefonso in the Centro Histórico ("Historic Center") of Mexico City. The university was dissolved in 1865 by the Mexican Emperor Maximilian .

In the spring of 1910, the university was re-established as Universidad Nacional de México on the initiative of Justo Sierra and opened on September 22, 1910 by President Porfirio Díaz . After the years of privation during the revolution , the university was able to consolidate itself as an institution from 1920. However, the university only achieved full autonomy after the first student and professors' strike of its career on August 26, 1929. Further strikes followed in 1936 and 1944.

In 1954, students and teachers moved into the new "university town" Ciudad Universitaria in the south of Mexico City.

In 1968, the UNAM found itself in the midst of student protests that culminated in the Tlatelolco massacre ( Matanza de Tlatelolco ) in Plaza de las Tres Culturas . Hundreds of students died in the massacre, for which the then Interior Minister and later President Luis Echeverría Álvarez (1970–76) has been responsible for genocide since June 30, 2006 . It marked a turning point in the history of Mexico.

The university experienced numerous other student uprisings, including in 1987 and 1999. Both were a reaction to the government's attempt to end the public and unpaid university character. The 1999 strike against neoliberal education policy dragged on for nine months and completely paralyzed university operations.

In 2009 the university was awarded the Spanish Prince of Asturias Prize in the Communication and Human Sciences category. The reason given was that the university had been an academic and educational model for numerous generations of students in its hundred-year history and had enriched the Ibero-American sphere with the most important intellectuals and scientists. It has also generously granted refuge to famous exiles of postwar Spain, fostered powerful currents of humanist, liberal, and democratic thought in America, and expanded its significant influence by creating a variety of institutions that enrich the academic world and connect it with the society they serve .

The campus was declared a UNESCO World Heritage Site in 2007 .