The Capilla de Maximiliano on the Cerro de las campanas stands on the spot where Emperor Maximilian was executed. 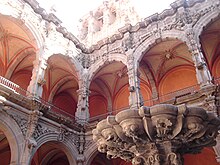 Santiago de Querétaro (short: Querétaro ) is a city in central Mexico with approx. 860,000 inhabitants (2015) and the capital of the state of the same name . It is believed that the name is derived from k'eri ireta rho . In the language of the Otomí , whose settlement areas were here in Aztec times, this means “place of the many people”.

The city is known for its colonial architecture and the Old Town since 1996 World Heritage Site by UNESCO . It plays an important role in Mexican history. The Casa de la Corregidora , the house built in 1770 by Doña Josefa Ortíz , called La Corregidora (i.e. wife of a high Spanish colonial official), was a conspiratorial meeting place for the leaders of the independence movement around 1810.

Emperor Maximilian was fusilized here in 1867 after the French intervention in Mexico came to an end with the last fighting near Querétaro. It was here that the first constitution after the Mexican Revolution was drawn up in 1917 .

Querétaro has an international airport . This is also the seat of the regional airline TAR Aerolíneas .

Statue of an Indian

The Queretaro Aqueduct is the symbol of the city. On 74 stone arches with an average height of 5.28 m, the structure stretches over 1.2 km through the city. This aqueduct was built between 1726 and 1738. It is on the list of historical milestones in engineering .

The Teatro de la República (Theater of the Republic) is a building from 1845 in the center of the city. It was a scene of historical events. For example, when the national anthem of Mexico was published on the evening of September 15, 1854 , it was playing in many cities at the same time, including here in the Theater der Republik.

The oldest part of the city is around the Plaza de Armas . There is the Casa de la Corregidora (Palacio de Gobierno) , the government palace built in 1770. In the Casona de los Cinco Patios Arts Culture and events are offered today. Here is also the Casa de Ecala , which is a sight because of its decorated balconies and facades. The Casa de la Corregidora is also located at the Plaza de Armas . The 18th century building was used as a royal house and prison. It functioned as the town hall until 1981 and is still the owner of the town today. The nearby Jardín Guerrero was officially opened on September 16, 1922 with the name Jardín Vicente Guerrero , as its statue adorns the central fountain. Originally this garden was part of the Santa Clara Monastery. A cathedral was also supposed to be built here, but this was never realized. The decorative design is the work of architect José Fernández Mendizábal . In front of the garden is the former town hall, which today houses the delegation from the old town.

Not far from the square is the Casa de la Zacatecana . According to a legend, the landlady had her husband murdered here, whereupon she killed the murderer herself, only to be found murdered a little later. Skeletons were found in the basement of the. Today the house offers works of art and everyday objects from the 16th to 20th centuries. Another haunted story is the Casa de Don Bartolo . It dates from the 17th century and looks rather simple from the outside. But in these walls a pact was supposedly made with the devil and many supernatural observations could be made.

A little away from the Plaza de Armas is the Templo y convento de la Cruz on a hill . The monastery is in operation and can be visited as well as the monastery garden. A baroque church from the 17th century is the Templo de Santa Clara . The former attached Capuchin monastery is now the Museo de la Ciudad and presents modern, local works of art. Another former monastery that has been converted into a museum is the Ex-Convento de San Agustín . The Museo de Arte is housed in the baroque building. Pictures from different eras and countries are exhibited here. The Jardín Zenea forms a prominent place . On the corner of this is the San Francisco church, built in 1550 and thus the oldest. The Museo Regional del Estado , which exhibits exhibits from pre-colonial times, has moved into their former monastery . Purely decorative buttresses catch the eye at the Templo de Santa Rosa de Viterbo . The construction of the tower dates from the first half of the 18th century.

Another museum is the Museo de la Restauración de la República . It is dedicated to the preservation of documents, books and photos that reflect the history of the place and the country.

Away from the center is the Cerro de las Campanas , the bell hill on which Emperor Maximilian was executed in 1867. A large Juárez monument, Maximilian's mausoleum and a museum honor the emperor. The Estadio La Corregidora is also outside the center .

The Colegio Austriaco Mexicano , an Austrian school abroad, is located on the outskirts of the city .

In 1986, four football world championship matches were held at the Estadio La Corregidora . Among other things, the German team played all their preliminary round matches there.