Neustadtgödens is a district of the municipality of Sande in the district of Friesland in Lower Saxony . Before the municipal reform of 1972 it belonged to the Wittmund district and was part of East Frisia . 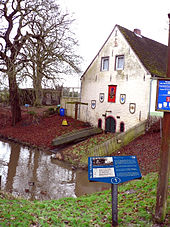 After the Antonius flood of 1511, when the Jade Bay reached its greatest extent, extensive dike measures began in the glory of Gödens . In the course of these measures, a sewer was built in 1544 , which formed the nucleus of the place. The owners of the glory, the von Frydag family , attracted many religious refugees to the planned town through religious tolerance , which was named Neustadt Gödens after the rulership of Gödens . The first settlers were mainly Mennonite religious refugees. Many of them were specifically recruited Dutch skilled workers.

Neustadtgödens soon developed into an important trading center with a prosperous port and good trade connections. Many of its residents made a living from trade and shipping. But after the construction of the Ellenser Damm in 1595 by Count Johann VII of Oldenburg , the East Frisian Sielort was cut off from the sea. Only through negotiations before the Imperial Court of Justice could the Oldenburg side be wrested from concessions that favored the further development of the place. After the dam was built, the inhabitants turned to trade and weaving. For the bleaching of the woven fabrics, larger bleaching meadows (the bleaching) were created on the edge of the village.

With the help of compensation payments to Count Peter Ernst II von Mansfeld , who raged in the rest of East Frisia , Neustadtgödens was largely spared from the turmoil of the Thirty Years War . With the marriage of Franz Ico von Frydag zu Gödens and the Catholic Margarethe Elisabeth von Westerholt, a time of unusual religious tolerance began. Franz Ico allowed his wife to practice her Catholic faith in Gödens Castle.

In the following years, residents of other denominations moved into the place, so that within only fifty years five churches were built in the place, which at that time had about 700 to 800 inhabitants. Besides the Mennonites, people of the Lutheran , Reformed , Catholic and Jewish faith lived here . 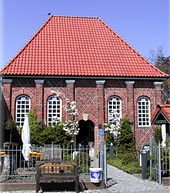 The religious peace of Augsburg gave the sovereigns the right to determine the religion for all residents of their territory (see also: Cuius regio, eius religio ). In East Frisia, however, this right was not exercised by the counts and princes , but was passed on to the individual territorial lords , who in their glories determined which religion was valid for the respective area. The family of Frydag owned the glory of Goden. Franz Ico von Frydag (1606–1652), reformed himself, was married to the Catholic Margarethe Elisabeth von Westerholt and gave his descendants the choice of creed. In addition, he and his successors, as the owners of the glory of Godens, granted Lutherans, Reformed, Catholics, Mennonites and Jews a home in Neustadtgödens.

The Mennonites were the first religious community in the place. Among other things, they came from the Netherlands as dike workers . Many of them later worked as linen weavers . They had had their own prayer house since 1709 , and in 1741 they were finally allowed to build their own church on Brückstrasse as the last Christian denomination in the village. The church ( Vermaning ) is a simple brick building in the classicism style and is now a listed building .

After the Thirty Years' War , the von Freydag family issued community letters of protection to the Mennonites , which resulted in further immigration from the Netherlands, Emden and Leer . In the course of the 17th and 18th centuries, the Mennonite community developed into the largest in East Frisia. From the end of the 18th century, however, the number of parishioners fell sharply, so that the last sermon was read here in 1841. The community has been considered extinct since 1893. Today a café has been set up in the former Mennonite church .

With immigration from the Lutheran Jeverland , Oldenburg and later also from East Frisia, the Lutherans made up more than half of the residents in Neustadtgödens at the end of the 17th century. The Lutheran church was opened as the city's first church in 1695. The current church tower was only added in 1714. In the tower there is a sandstone portal, above which the coats of arms of Count Burchard Philipp von Fridag and his wife are depicted. The organ was built by Johann Gottfried Rohlfs in 1796–98 and renovated and expanded in 1990 by the Alfred Führer company . Since then it has had 15 stops on two manuals and pedal.

The glory of Gödens joined the Evangelical Reformed denomination early on. There were also many Reformed among the residents of the newly founded Neustadtgödens, who in the first few years still had to use the church in neighboring Dykhausen, where the former Anabaptist Gerhard Westerburg had also worked as a pastor in his last years . With the help of donations it was finally possible to build a reformed church in Neustadtgödens in 1715. Like the Lutheran church, the reformed church also has a sandstone portal with the coat of arms of Count Fridag von Gödens. Until the middle of the 20th century, the church, which is now a listed building, still had a ridge tower with a domed roof. After the Second World War the church was sold. Today there are holiday apartments in the building.

In 1715, St. Joseph's Church was built as the first Catholic church in East Frisia after the Reformation . Its construction goes back to the connection between Count Franz Ico von Frydag and the Catholic Margarethe von Westerholt, whose two eldest Catholic-raised sons established the first Catholic missionary office in the otherwise Protestant East Frisia through an intervention with the German Emperor in 1692.

The first Jews settled in Gödens during the Thirty Years War. They were first mentioned in 1640 in the Income Register of Glory. In 1708 they were given permission to build a cemetery and a synagogue in Neustadtgödens , which is first mentioned in 1752. In 1782 the windows of Jewish residents were broken in a pogrom after the Jewish festival of Purim . The residents were later compensated for this. In 1852 the community built a new prayer house in the style of a small city synagogue, which is still preserved today. At that time, the Jews made up a quarter of the town's population. At the end of the 19th century, economic reasons caused the Jews to leave Neustadtgödens more and more. Already at the beginning of the thirties the synagogue was hardly used anymore because there weren't enough believers living in the place. In 1936 the last service was held in the synagogue; on June 27, 1938, the building was sold to a private person from Wilhelmshaven and thus survived the November pogroms of 1938, next to the synagogue in Dornum, as the only Jewish place of worship in historic East Friesland.

In addition to the five sacred buildings already mentioned, there are other sights such as the weighing house and the judge's house.

The historic weighing house is located directly on the Siel . It was used to weigh all goods traded at the Sielhafen in order to set the taxes on the ruling von Gödens family. The taxes were an important source of income for the Lords of Gödens. The family coat of arms of Franz Ico von Frydag can be found at the weighing house.

The judge's house is in the immediate vicinity of the historic village . From the beginning of the 17th century until 1743 the glory of Gödens had its own regional court here . Since 1986 a museum has been housed in the historical building, which shows an exhibition on the history of Neustadtgödens.

There are two Dutch windmills on the outskirts of the village . The Oberahmer Peldemühle was built as a two-story gallery Dutch in 1764 in the Jeverland area. With the construction, the Count of Gödens reacted to a Prussian meal edict that curtailed the rights of the glories to their mills. The Wedelfelder Wasserschöpfmühle was built in 1844 as one of the last of these mills in East Frisia and served to drain the Black Brackish , which was partially below sea level .

Tour of the place

Plan for the tour through Neustadtgödens (next to the Landrichterhaus)

A suggestion for a tour of the town can be found on an information board next to the judge's house.