To determine the third women's soccer team in the field of UEFA at the 2016 Olympic Games in Rio de Janeiro , a qualifying tournament in was March 2016 Netherlands performed.

As a qualification for the women's tournament for the teams from the UEFA area, as since the Olympic Games in 2004, the women's soccer world championship, which took place last year and where the three or two - if the Olympic Games take place in Europe - are the best European teams, served initially qualify for the Olympics. The English national football team for women is an exception , as England is not entitled to participate in the Olympic Games due to the lack of its own national Olympic committee.

In 2008 Denmark and Sweden had to play for third European starting place at the 2008 Olympic Games . A similar situation arose for the 2016 tournament: England as the best European team and third place in the World Cup were again not eligible to start, Germany and France as fourth or teams eliminated in the quarter-finals had their place on the grid. However, since the four European teams Netherlands , Norway , Sweden and Switzerland were eliminated in the round of 16 and it was not clear which was the fourth best European team, the third European participant had to be determined separately. UEFA therefore decided to schedule a tournament for these teams. 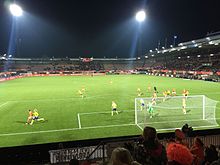 Game scene from the match between the Netherlands and Sweden.

The four teams played against each other in the form of a mini-tournament in a free-for-all mode. The best team got the third European starting place in Rio de Janeiro. On October 19, 2015, the KNVB selected The Hague and Rotterdam (two stadiums) as the venues.

The following sequence applied to the placements:

The special interest broadcaster Eurosport broadcast one game live per matchday. In the case of goals in the parallel games, there was a short switch to the parallel game. Due to the table constellation, the last matchday was shown as a conference of the two games.