Paul Fröhlich (born March 21, 1913 in Niederplanitz , † September 19, 1970 in Berlin ) was a high-ranking party functionary in the GDR as a member of the Politburo of the Central Committee of the SED . 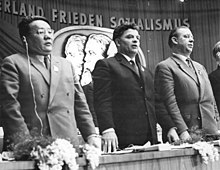 Fröhlich was trained as a cook from 1929 to 1931 and worked as an industrial and miner. In 1930 he joined the KPD . In 1933 he was arrested for illegal political work and afterwards lived temporarily as a casual worker. In 1939 he was called up for military service as a field cook. In 1944 he deserted, was interned by the Swiss border police and was an American prisoner of war until June 1945 .

Until 1950 he was secretary and first secretary of the KPD / SED district leadership in Glauchau , Dresden , Bautzen and Leipzig . 1950–1953 he completed a distance learning course at the party college and from 1952 was first secretary of the SED district leadership in Leipzig . Fröhlich practiced a particularly authoritarian management style in his secretariat and in the district management. He suppressed any criticism of his decisions or of himself with unyielding severity and acted as the sole ruler who rigorously persecuted those who thought differently - even from within his own ranks.

On June 17, 1953 , Fröhlich was in Berlin on business. He returned to Leipzig in the early afternoon, where he severely criticized the police, who had been reluctant until then, for their indecision and gave them the order to shoot the insurgents. Fröhlich's order to shoot two people had to pay with their lives, at least another five people fell victim to the Soviet troops after the state of emergency was declared (4 p.m.). Paul Fröhlich's brutal use of armed force, even before martial law was proclaimed, granted him Ulbricht's favor after the suppression of the uprising, which paved his political ascent into the inner circle of leaders of the SED.

Fröhlich was awarded the Patriotic Order of Merit in 1956 and 1969 , in 1958 with the medal for fighters against fascism , in 1959 with the merit medal , in 1963 with the banner of work , in 1965 with the Karl Marx order and in 1970 the fight for “For merit for the people and Fatherland “excellent. His urn was buried in the "Memorial of the Socialists" at the Friedrichsfelde Central Cemetery in Berlin-Lichtenberg .

Paul Fröhlich was jointly responsible for the decision of the Central Committee of the SED to blow up the St. Pauli University Church in Leipzig : No house of worship should be tolerated on the socialist Karl-Marx-Platz with the socialist Karl-Marx-Universität . The university's senate and the Leipzig city council approved the demolition of the church on May 30, 1968. His figure can therefore be seen in the painting by Werner Tübke “Working class and intelligence” on the first floor of the main building of Leipzig University , the result of a competition with the general theme “Working class and intelligence are inseparable under the leadership of the Marxist-Leninist party in socialism connected " . Next to him are the then chairman of the council of the Leipzig district, Erich Grützner , and the then mayor of Leipzig, Walter Kresse .

In the GDR the NVA training center Schneeberg (AZ-10) was called "Paul Fröhlich". From 1973 to 1990 the main company of the TAKRAF combine operated as VEB Verlade- und Transportanlagen Leipzig "Paul Fröhlich" (VTA).

Fröhlich died of cancer at the age of 57.

First secretaries of the SED district leadership in Leipzig