The title of this article is ambiguous. For the politician of the same name, see Paul Oestreich (politician)

Paul Oestreich was born the son of a carpenter. First he attended elementary school in his hometown for four years and then a secondary school, for which his parents paid school fees. With the Abitur he began his academic training and studied mathematics, physics, philosophy, pedagogy and new languages ​​at the universities of Berlin and Greifswald from 1896 to 1900. After the state examination in 1901, he completed his legal clerkship in Cologne and Leer. He then taught in Ilfeld and Barmen until he was appointed to the Hohenzollern secondary school in Berlin-Schöneberg in 1905 . There he taught until he was released by the National Socialists, who took him into protective custody after the “ seizure of power ” in 1933 and imposed a professional ban on him.

In 1919 Oestreich was one of the founders of the Association of Decided School Reformers (BESch), whose chairman and leading theorist he remained uninterrupted from 1921 until it was dissolved in 1933. Initially, this federation was reserved for teaching staff from higher schools, but gradually opened up so that, from 1921, laypeople interested in education could also join the federation. With 5,000 members, the federal government gained recognition in specialist circles through the dissemination of educational, humanistic and educational ideals.

In 1920 the federal government took part in the Reichsschulkonferenz , at which educators dealt with ideas from various directions in reform pedagogy that had their origins in the 19th century. The unanswered questions about the renewal of the school system were pursued further in the Association of Resolute School Reformers, which campaigned for a decisive school reform to overcome the Weimar school compromise through publications and conferences . As chairman of the federal government, Paul Oestreich edited books and a magazine and published specialist pedagogical articles. In this way, he became an active propagandist for the elastic, secular unified school that was strived for , which was supposed to better prepare the children and young people for the tasks that would later arise in life in the sense of a work and life school .

From 1923 to 1926 Oestreich was on the executive committee of the German Peace Society . He was one of the founders of the German peace cartel led by Ludwig Quidde . The International Peace Congress in Berlin in 1924 came about on his initiative. Associated with him was the International Congress for History Education .

On the basis of the Reichstag Fire Ordinance , he was imprisoned for two months in March 1933 and released from school on September 30, 1933. The leadership of the Association of Decided School Reformers finally ended with its forcible dissolution in June 1933. No activities on the part of Oestreich can be proven during the National Socialist era .

As an opponent of the Nazi regime, he became a member of the KPD after the war on June 11, 1945 , from 1946 of the SED and from 1945 to 1949 worked as a senior school councilor in Berlin-Zehlendorf . Here he was able to contribute his ideas of the renewal of the education and school system, of an education that aimed at a community encompassing humanity . As an education politician and Zehlendorfer Hauptschulrat, he campaigned for the drafting of the Berlin School Act of 1947 and the introduction of a single school in Berlin. Together with his former board members in the former Bund Resolute School Reformers Fritz Karsen and Arno Wagner , in a letter to the Prussian state assembly in April 1947, he called for easier transition to higher schools for elementary school students by introducing an eight-year joint elementary school . Because of his SED membership, Paul Oestreich was dismissed from the main education office in West Berlin in January 1949 . Until his retirement in 1950, he moved to the main education office of the magistrate from Greater Berlin to East Berlin , where he worked as a department head for higher education with Leo Regener . As a member of the Schwelmer Kreis , founded by Fritz Helling in 1952 , he tried to initiate an all-German school reform in West Germany with like-minded reform educators in the sense of the statutes of the former Association of Resolute School Reformers , which was doomed to failure due to the pursuit of communism suspicious activities during the Adenauer era . In August 1954, on the instructions of the West Berlin Senator for Social Affairs, the pension payments to Paul Oestreich were blocked. The hostility because of his SED membership and the lack of a pension led him to move from Zehlendorf to East Berlin in 1954. The dispute over the pension payments with the West Berlin Senate lasted until 1957. At the request of the Interior Senator, Paul Oestreich was denied all pension claims in May 1957 by the West Berlin Administrative Court because of behavior contrary to the civil service . 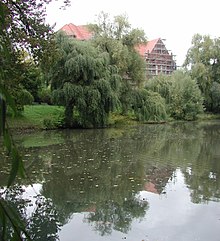 Oestreich has received several awards for his work in the GDR , including the Patriotic Order of Merit in bronze and as Honored Teacher of the People . The University of Greifswald (1948) and the Humboldt University of Berlin (1958) awarded him an honorary doctorate .

Paul Oestreich's urn was given a place in the ring wall of the Socialist Memorial at the Friedrichsfelde Central Cemetery . 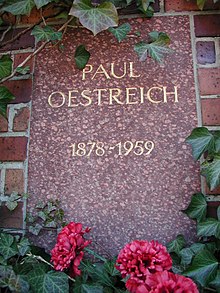 The grave slab for Oestreich in Berlin-Friedrichsfelde

In 1960, the former high school II received in the former district Berlin-Weissensee (today Pankow belonging) and then on Advanced High School (EOS) the name of the teacher and school reformer, they up to their renewed renaming in 1993, now in Bühring -Gymnasium ( Primo-Levi-Gymnasium since 2007 ).

On April 14, 1967, the former street at the secondary school , where the school is located, was renamed Paul-Oestreich-Straße .