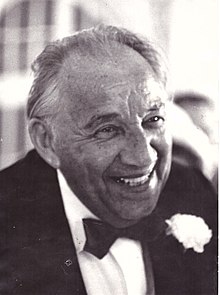 The Free and Hanseatic City of Hamburg awarded him the Johannes Brahms Medal in 1962 .

As a teenager, Paul Schwarz, who grew up in a Jewish merchant family in Vienna, passionately attended the Vienna Court Opera and learned many vocal pieces by heart. After studying at the Vienna Conservatory , he made his debut in 1909/10 with engagements at the Bielsko City Theater ( Bielsko ). This was followed by appearances at the Vienna Volksoper from 1910 to 1912 and at the Zurich City Theater in 1912 . In 1912 he continued his singing career at the Stadttheater Hamburg , where he was on stage in more than 4,000 performances for 21 years (only interrupted by one year of military service in 1915) and sang in over 140 roles, mostly as tenor buffo . His repertoire also included heroic roles such as Manrico (" Il trovatore "), Turiddu (" Cavalleria rusticana ") and Erik (" The Flying Dutchman "). There were also numerous operetta roles, including with Fritzi Massary in the Volksoper am Millerntor in Hamburg. He appeared on stage in several world premieres, for example in 1911 at the Vienna Volksoper in " Der Kuhreigen " by Wilhelm Kienzl and in 1927 in Hamburg in " The Miracle of Heliane " by Erich Wolfgang Korngold and in " Die versunkene Glocke " by Ottorino Respighi .

He has made guest appearances in Berlin , Vienna, Amsterdam , The Hague , Paris and New York . In addition, between 1915 and 1918 he gave performances as a master of the ceremony in concert cafés, cabarets, variety shows and at balls. In Hamburg, the only 1.60 m tall tenor with his "Italian timbre ", which was considered agile, playful and versatile, advanced to "Hamburg's favorite" (according to the Hamburg tourist paper on December 10, 1927, quoted in "Silent Voices") . He received special recognition from the Stadttheater Hamburg when he took over the hero role impromptu in " Tannhäuser " on October 12, 1912 after the tenor star Pennarini suffered a faint attack during the performance.

Ban on performing under National Socialism

After the National Socialists came to power in January 1933, artists considered to be “Jewish” were ostracized and deprived of their rights. Because of his Jewish origins, Paul Schwarz had to accept significantly worse contractual conditions in February 1933 and was finally terminated at the Hamburg Stadttheater in May 1933; he had his last performance on June 14, 1933 as Gaston in " La Traviata ". From 1933 onwards, artists of Jewish origin often only had the option of participating in events organized by the Kulturbund Deutscher Juden , as they were excluded from other stages. From the beginning Paul Schwarz was active in numerous concerts such as revues , operas and operettas of the Kulturbund in Hamburg, Berlin and Frankfurt am Main . In the 1939/40 and 1940/41 seasons he was part of the soloist ensemble of the opera troupe of the Jewish Cultural Association in Berlin. For several years he was able to continue his international appearances: at the theater of Teplitz-Schönau ( Teplice ), in 1934 at the Wagner Festival in Brussels , in 1936 at the Mozart Festival in Glyndebourne , in 1936 with the Vienna State Opera in Lisbon and in 1936 on a tour with Richard Tauber in Egypt ( Cairo and Alexandria ).

After the " Anschluss " of Austria in 1938, Paul Schwarz lost his Austrian passport, which made it impossible to make any further guest appearances abroad. With the escalation of the National Socialist policy of discrimination and extermination against Jews, Paul Schwarz, who was considered a “Jew” (who converted to Catholicism as a young man before marriage), was denied any public artistic activity in the last years of the war. In a joinery in Berlin he had to do hard work until the end of the Second World War. He was probably not deported because his wife Adele (née Blazek) was considered an "Aryan" by the National Socialist authorities.

After the end of the war, the Berliner Rundfunk employed him as a program designer, clerk, author, singer and actor. In 1948 Paul Schwarz went back to Hamburg and occasionally appeared on stage at the Hamburg State Opera: in 1949 as Basilio in Mozart's “ The Marriage of Figaro ” and in a New Year's Eve performance in “ Die Fledermaus ”. On his 75th birthday, the Hanseatic City of Hamburg awarded him the Johannes Brahms Medal. For his 90th birthday, a record with old recordings, limited to 300 copies, was released.