The Robert Koch School (also: RKS for short ) is a general high school and open all-day school in Clausthal-Zellerfeld .

School building of the RKS 1905–1969, today the Institute for Mathematics of the TU Clausthal . The facade was changed a lot after 1969. 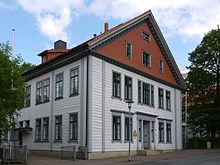 The history of the school goes back to 1597. At that time the school was operated as a Latin school . In 1831 the school was declared a "first class grammar school" and the first Abitur was also passed. In 1928 it was renamed after its most famous high school graduate Robert Koch , who graduated from high school here in 1862. At that time the school building, built in 1844, was in Clausthaler Graupenstraße; this building is used today by the state construction management. In 1905 they moved into a newly built school building on Erzstrasse, which today serves as accommodation for the Institute of Mathematics at Clausthal University of Technology . Due to the increasing number of schoolchildren, a new building was erected on Berliner Straße from 1967 to 1969, which could be occupied in 1969.

Initially, the students came from the entire Zellerfeld district , which was dissolved in 1972. Today the students come from the area of ​​the mountain and university town of Clausthal-Zellerfeld including its districts Altenau , Schulenberg im Oberharz , Wildemann and Buntenbock . The school is also attended by students from Hahnenklee , Sankt Andreasberg and Lautenthal .

Since 1964 there has been a student exchange between the Robert Koch School and the Lycée Napoléon in Clausthal-Zellerfeld's French twin town L'Aigle , which is still ongoing today. There is also an exchange with the Collège Molière, which is also located in L'Aigle.

Since the 1990s, Clausthal-Zellerfeld and Freiberg have been twinned, which also resulted in regular school exchanges.

Further partnerships exist with Alabama in the USA , Krakow and Oborniki in Poland and Spišská Nová Ves in Slovakia . A partnership with a school in London has existed since 2008. In grade 8, a bilingual exchange with Amersfoort in the Netherlands has been taking place since 2017 .

A motto from mining 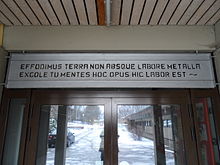 Inscription above the main entrance

In 1724, when the school was rebuilt under Rector Fahsius, a special motto was coined, which is reminiscent of Clausthal's mining tradition :

This motto can also be found today above the main entrance of the school building.

In the early 1970s, the school had a newspaper Rote Aktion published by the Socialist Action Collective (SAK) . In 1972 the Socialist Action Collective published the brochure Zur Praxis des Oberschulkampfes , which is the earliest and one of the few theoretical documents from a group of students from a forerunner organization of the Communist League of West Germany . However, this movement fell asleep again by the mid-1970s at the latest.

The Robert Koch School has been a partner school of the Harz Ski Boarding School since 1998 . Prospective biathletes can live and train in a building belonging to the Lower Saxony Sports Youth in Clausthal-Zellerfeld. They are exempted from teaching to participate in competitions; the material will be made up later in hours to be given separately. This explains the high proportion of successful biathletes among their graduates.

The Robert Koch School is a partner school for competitive sports.

In 2001 a computer group was set up for senior citizens, who were instructed by students from the Robert Koch School.

Cooperation with the TU Clausthal

There is a cooperation with the TU Clausthal . Mathematics teachers at the school are involved in bridging mathematics courses at the TU as lecturers and trainers and receive further training there.

There is also a school medical service , which is organized by students under the guidance of a teacher and is part of the Maltese emergency service .

Every year in February, the Franco- German language seminar takes place, at which RKS students and teachers as well as French exchange students work on projects, develop lectures and discuss them in the respective foreign language.

Since 2013 there has been a student company , the Bato student cooperative, for Nepalhilfe. In this regard, the annual Nepal run is known, in which participants run a certain number of laps and these are paid for by a sponsor in any amount.

Since 2015 the international chemistry workshop has been held annually in the RKS and parts of the Technical University. As a rule, 25 students from different nations have the opportunity to gain in-depth insights into chemistry and some experiments with teachers and representatives from the university.

In 2017, the RKS received the title “Reference School Film”.

The subject of self-determined learning

Since the 2013/2014 school year, the lessons have been rhythmic. This means that the first hour is 40 minutes and all remaining hours are 80 minutes. At the same time, from grades 5 to 13, the subject of self-determined learning (SBL) is given every four hours. Since the other subjects have been shortened for this purpose, there are no additional lessons for the students. The aim of self-determined learning is to develop learning techniques and apply them in depth in the other subjects.

Schoolchildren have the opportunity to opt out of the second foreign language (French or Latin), which is consistently used from year 6 to 10, in year 11 and replace it with subjects as part of the compulsory elective offer.

In the 2018/19 school year, the Robert Koch School was awarded the title “ European School in Lower Saxony” , particularly because of its diverse international contacts.

Altogether, the names of 83 headmasters since the 16th century can still be found today. However, this also includes the headmasters of the former Latin school in Zellerfeld , which probably merged with the Clausthaler Gymnasium in the 19th century.