Saint Jouin-de-Marnes is a commune déléguée in the western French municipality of Plaine-et-Vallées with 571 inhabitants (as of January 1, 2017). It is located in the department of Deux-Sèvres in the region Nouvelle-Aquitaine and above all by its Romanesque known abbey church.

Saint Jouin-de-Marnes is about 90 meters above sea level. d. M. and about 50 kilometers to the north-west of Poitiers in the hilly cultural landscape of the Haut-Poitou . The canton capital Parthenay is about 34 kilometers to the south-west; Airvault is about halfway there .

Agriculture and handicrafts have played the dominant roles in the municipality's economic life for centuries. Since the 1970s, tourism has been added in the form of vacation rental.

The village already had a predecessor named Ensio (later Ension ) in Gallo-Roman times . It was on a Roman road that led from Poitiers to Angers and is also called the "Way of St. Hilary ". The existence of this connection path contributed significantly to the later development of monastic life in this place. At the end of the fourth century a certain Jovinus (French Jouin ) is said to have sought solitude in the forests of the region together with a small group of "disciples". According to legend, Jovinus founded an oratory near the town of Ensio around the year 342 .

The later founded monastery, which initially bore the name of the village, was to become one of the first centers for the spread of Christianity in the region. It is - after Saint-Martin-de-Ligugé ( Vienne ), which was founded in 361 by Saint Martin of Tours - as the second oldest monastery in France. The sermons and charitable work of its founder led to his veneration as Saint Jovinus. His bones were later kept as relics in the small Carolingian monastery church. The abbey then also bore his name.

Abbey building towards the end of the 17th century, from the east 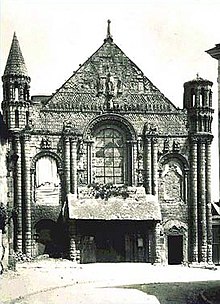 West facade towards the end of the 19th century.

In the course of the 7th century Felix, the bishop of Nantes , entrusted the later canonized Martin of Vertou with the missionary work of the south of his diocese and Poitou. His mission also took him to Ension , where he found a more or less regular community monastery life. He succeeded in imposing the rule of St. Benedict on the monks as a way of life. In the wars between Pippin , Charlemagne and Hunold Duke of Aquitaine in the second half of the 8th century, the monks fled their abbey.

During the time of the Norman invasions, at the beginning of the 9th century, the abbey was initially spared any devastation, as it was located away from navigable rivers. In the 9th century, the Abbey of Saint-Jouin developed into a center of monastic culture in Haute-Poitou. In other areas of the region, the monks of the monasteries attacked and plundered by the Vikings had to flee. Many of these refugees found refuge in Saint-Jouin. For example, the monks of the Abbey of Saint Martin of Vertou left their monastery with the relics of their founder. In 843 they withdrew to Ension with the support of Louis the Pious . They gave the monastery new impulses by reviving the meanwhile forgotten Rule of Saint Benedict.

In 878, the monks restored the old Carolingian church to the current location of the abbey church. Many of the refugees brought valuable relics with them, which Saint-Jouin became a popular destination for many pilgrims, whose donations helped the abbey to prosper.

Saint-Jouin was on a direct route between Angers and Poitiers, which flowed into the Via Turonensis there , and was therefore on an important stretch of the Camino de Santiago to Santiago de Compostela , which flourished in the 11th and 12th centuries.

In 1356 the region fell into the hands of the English. Devastation was mainly committed between 1369 and 1374. In 1372 the English cut the south tower from its small bell tower. In the second half of the 14th century, during the Hundred Years War (1339-1453), the abbey fortifications were expanded to protect against the English and against raiding hordes. The church was partially retrofitted with defense technology. In 1422, the fortifications of the monastery buildings were expanded, but the abbey buildings were severely damaged in the Huguenot Wars (1562–1598).

In the 17th century, the monastery joined the reform movement of Saint-Maur and once again experienced a brief period of prosperity, but in 1770 it was completely abandoned. During the revolution , the church remained largely intact, whereas the abbey buildings were almost completely demolished and used as a quarry. At the end of the 19th century, the half-ruined church building was completely restored.

The municipality of Saint Jouin-de-Marnes was merged with Oiron , Brie and Taizé-Maulais to form the Commune nouvelle Plaine-et-Vallées on January 1, 2019 . Since then it has had the status of a Commune déléguée.

The place has no other significant sights, but is a good starting point for hikes in the forest and water-rich surroundings.