The combined community is located between the Mittelland Canal in the south, the Rehburg Mountains in the west and the Steinhuder Meer in the north. In the east it borders on the city of Wunstorf in the Hanover region . The Sachsenhäger Aue flows through the area and joins the Rodenberger Aue east of Auhagen to form the Westaue.

All of the localities of the integrated community originated in the area of ​​the historic Dülwald , which was sparsely populated even in prehistoric times.

The name of the municipality of Sachsenhagen goes back to a moated castle of the Ascanian dukes of Saxony, which was founded in 1248. In 1297, the Schaumburg counts of Sachsenhagen took over as pledge for an unpaid dowry. In the following time they took over the rule over the whole area of ​​the today's integrated community.

Since the division of the Grafschaft Schaumburg in 1647, Sachsenhagen, Auhagen and Düdinghausen belonged to the Hessian Landgraviate of Schaumburg. All other places were in the territory of the principality (until 1918) and the state (until 1933) Schaumburg-Lippe . It was not until the administrative and territorial reform in 1974 that all the places in the new joint municipality and thus also in the Schaumburg-Lippe district were united. After the district of Schaumburg was founded on August 1, 1977, it belongs to it.

With the completion of the Mittelland Canal in 1916, Sachsenhagen got a port, which is still an important economic factor for the city today. From 1898 to 1964, the Steinhuder Meer Railway ran through Hagenburg, Schmalenbruch and Wiederbrügge. The former route is now a cycling and hiking trail.

In 1993, the district's (waste) disposal center was opened in the old clay pit by the brickworks, west of Sachsenhagen. Further west, in the Sachsenhäger forest near Nienbrügge, a wildlife and species protection station was set up in 2001 in a former army depot. 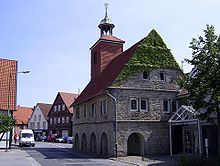 The local elections in September 2016 resulted in the following distribution of seats:

Mayor of the municipality Jörn Wedemeyer (SPD) was elected on September 11, 2011 with 58.3 percent of the votes cast. He was able to prevail in the first ballot against two other candidates and thus succeeded Artur Adam (SPD). 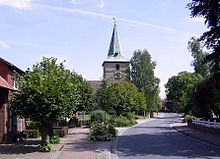 In Sachsenhagen, the town hall, built in 1607, initially served as a prayer house, which consequently received a bell tower in 1712. The Evangelical Lutheran parish of Sachsenhagen, with around 2000 members, with Auhagen since 1990, is part of the Evangelical Lutheran State Church of Schaumburg-Lippe. It became an independent parish in 1650 when Countess Amalie Elisabeth zu Hessen-Kassel was granted city rights . This also included the right to build a church, which was then built between 1663 and 1676, initially without a tower due to a lack of financial means. A generous donation from Ms. Elisabeth Tunner-Hartmann made it possible to add a church tower in 1976. The church was completely renovated in 1996/97. Since August 29, 2004 it has been called "Elisabethkirche", which goes back to Countess Amalie Elisabeth zu Hessen-Kassel .

Since 1990 Auhagen, which had its own chapel until the Thirty Years' War , no longer belongs to the Bergkirchen parish, but to the Sachsenhagen parish.

Hagenburg and Altenhagen belong to the Protestant congregation of the St. Nicolai Church in Altenhagen, which Conrad Wilhelm Hase built from 1868 to 1871 .

The Catholic Herz-Jesu-Kirche in Sachsenhagen, built in 1963, is a branch church of the parish of St. Joseph in Stadthagen. The catchment area of ​​the Herz-Jesu-Kirche includes the political communities Sachsenhagen, Auhagen and Wölpinghausen. Hagenburg and Altenhagen belong to the parish of St. Bonifatius in Wunstorf and use the St. Hedwig branch church in Steinhude. 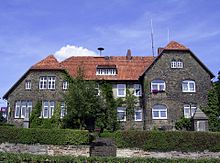 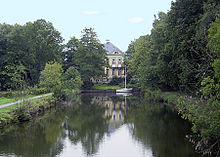 Joint municipalities in the Schaumburg district