from Wikipedia, the free encyclopedia
Battle of Telamon
Part of: Celtic War in Northern Italy

The Battle of Telamon in 225 BC BC was one of the decisive battles in the Celtic War of the Roman Republic . In it a large Celtic army of cis- and transalpine tribes was defeated by the two armies of the incumbent Roman consuls Lucius Aemilius Papus and Gaius Atilius Regulus , who himself died in close combat. The battle ended the expansion of the Celts on the Apennine peninsula and was decisive for the occupation of Northern Italy by the Romans. 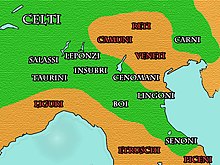 The Celtic War was preceded by a long period of peaceful coexistence between Romans and Celts in northern Italy. 232 BC However, at the request of the tribune Gaius Flaminius , land in Celtic possession (the Ager Gallicus ) was distributed to Roman citizens. The Boier and Insubrian tribes then united against the Romans, called on their neighbors to participate in the fight and took the Gaesati in pay. Their kings Konkolitanos and Aneroëstos put together an army, which in particular Boier, Taurisker and Lingonen joined.

For their part, the Romans prepared for the impending conflict by stocking up and concentrating their armies. Their allies were called upon to provide troop contingents as well, and for this purpose they set up lists of all men fit for military service ( formula togatorum ). This census was probably the first that Rome had held in all of Italy. In addition, it concluded friendship treaties with the Celtic Venetians and Cenomanians and tried to secure peace in Iberia in the Ebro Treaty with the Carthaginian Hasdrubal in order not to have to wage two wars at the same time.

The Romans expected an attack by the Celts on the highly endangered Ariminum on the Italian east coast. Instead, however, they crossed the Apennines - probably in the area of ​​today's Bologna - and invaded Etruria . The Gaesati in particular, who had embarked on the campaign for the sake of material gain, tried to enrich themselves through looting. At Faesulae there was then the first battle of the Celts with an army of allegedly 54,000 Etruscans and Sabines under the leadership of a Roman praetor , which was defeated. While the victors did not take advantage of the resulting advantage, the Roman government pushed ahead with the mobilization of troops: A force of 40,000 Umbrians , Sarsinati , Venetians and Cenomanians , for example, moved to the home of the Boier to persuade them to retreat.

The incumbent consul Gaius Atilius Regulus was called back from Sardinia to defend Rome and crossed to Pisa with four legions , while his colleague Lucius Aemilius Papus led an army to the east coast of Ariminum. In this way, the two could encircle the Celtic force between them and begin the decisive battle in a clearly superior position.

Gaius Atilius Regulus stationed his troops on a hill above the path that the Celts had to pass. They did not expect his presence, as they suspected him to be in Pisa, and instead assumed that Lucius Aemilius Papus had sent parts of his cavalry to the heights. Accordingly, they underestimated the danger and attacked the crew of the hill with their cavalry and light infantry. But then they realized that the entire four legions of Regulus were waiting in front of them and that the army of Papus was still behind them. Thereupon they formed themselves for the decisive fight: The Gaesati and Insubrer turned backwards against Papus, while the Boier and Taurisker tried to storm the hill straight ahead. The flanks were protected with carts and wagons; a small group of the Celts occupied another nearby hill during the battle to secure their booty.

Course of the fight and outcome

The Roman sources describe the behavior of the Celts in the battle of Telamon as in many other armed conflicts as very frightening. The Gaesati in particular had undressed, uttered terrible roars and made noise with trumpets and horns. The Celtic army was in fact encircled, but on the other hand had clearer battle rules and was self-contained. In fact, in a first exchange of blows, the Celts succeeded in killing Gaius Atilius Regulus and presenting his head to the kings Konkolitanos and Aneroëstos.

In the long run, however, the Celts were exposed to the pila (spears) and slingshots of the Roman army, as their shields did not cover their entire bodies. The Roman cavalry was able to claim ownership of the hill for this reason, and the Celts were hard pressed between the javelin throwers advancing from both sides. Some of them rushed on the enemy in blind despair, while others fled to the back ranks, causing disorder in the armed forces.

In the second phase of battle that followed, the Roman long-range fighters withdrew despite their superior strength; Melee troops took their place. These took up the fight man against man with the northern Italian Celts, while their Gaesatian mercenaries had already lost their courage to fight. Due to their superior weaponry and the support of the cavalry, the Romans continued to have the upper hand and almost completely wiped out their enemies. A total of 40,000 Celtic warriors are said to have been killed and 10,000 captured, only the riders were able to flee. King Konkolitanos became a prisoner of war, Aneroëstos and his entourage committed suicide.

Localization of the battle

The place of the dispute, Telamon , is mostly identified with the modern town of Talamone north of Cosa on the west coast of Italy, which was also called that in ancient times. According to the classical philologist Gerhard Radke , the battle of 225 BC must have happened. BC, however, took place somewhere between the cities of Ariminum , Faesulae ( Fiesole ) and Clusium , i.e. in the interior of Italy. Therefore, it seems to have been a different Telamon , more northeasternly located .

As a result of the Battle of Telamon, the Romans, who had hitherto been purely defensive towards the Celts in foreign policy, went over to the attack. First they subjugated the Boier and contractually bound them to their supremacy. 223 BC A Roman army under Gaius Flaminius then attacked the Insubrians very successfully. In the battle of Clastidium the following year, the Celts of northern Italy were finally defeated again, the so-called Gallia cisalpina came under Roman rule. In the Second Punic War , however , Hannibal was able to mobilize numerous Celtic tribes from this region against the Romans again.

According to Polybius, the Celtic War of 225 BC was. The first case in which the Roman allies fought not only for the protection or for the benefit of the city of Rome, but faced a concrete danger themselves. In the collective memory of Italian contemporaries, the battle, like the battle of the Allia, was in 387 BC. And the invasion of the Celts in Greece in 279 BC. A common struggle of the civilized world against the invading and plundering barbarians. At Telamon they therefore faced the combined forces of the Romans, Etruscans and Campanians , who could then understand their victory as a punishment for the Celts for their earlier raids.

Quintus Fabius Pictor , who himself took part in the Battle of Telamon, described the events in his historical work, which has only survived in fragments. Later and more completely preserved sources are: