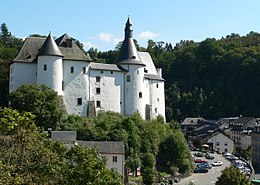 Clervaux Castle above the town

Clervaux Castle, view from the south

The Clervaux Castle ( French Château de Clervaux ) and Clervaux Castle called, is a castle fortress in Luxembourg municipality Clervaux . It stands on a rock tongue in the middle of the village and was founded as a hilltop castle in the 12th century at the latest . The first known lords of the castle were the Sponheimers . Via the von Meysenburg family , the complex came to a sideline of the Counts of Vianden at the beginning of the 15th century . This had the castle expanded and strengthened. Via daughters of the respective owner family, it finally came to the de Lannoy family, in whose possession it remained for over two centuries. She expanded the complex to its current size and converted it into a castle , which, however, still has a strong castle character. In 1927 in civil ownership, the complex was placed on September 26, 1935 as a national monument ( Monument national ) under monument protection. It burned down completely in World War II after heavy fire from German troops. Rebuilt by the Luxembourg state after the end of the war, the castle is now home to the municipal administration of Clervaux and three museums. One of them shows the exhibition The Family of Man , which is part of the world document heritage .

Some historians see the roots of today's complex in a Roman fort , but the oldest known building structure dates from the 13th century, so this assumption has not yet been proven. A castle at today's location was first mentioned in 1126 when Gerhard I von Sponheim, a stepbrother of Count Friedrich I von Vianden , was named as its builder. Gerhard had been lord of Clervaux since 1106, a lordship that seems to have arisen from the property of the Stavelot Abbey . The castle in Clervaux could initially have been a Stavelot bailiwick .

After the Counts of Clervaux died out, the castle and the lordship fell to the Lords of Meysenburg, whose emblem - three titmice  - can still be found in the Clervaux coat of arms. When Maria von Meysenburg married Friedrich I of Brandenburg in 1405, the property came into the possession of the bridegroom's family, a branch of the Counts of Vianden, and remained there until 1426.

Today's south wing and the so-called Brandenburg Tower to secure the south flank were built under the Brandenburgers . However, he could not prevent Duke Anton of Burgundy from taking the complex for the Bourguignons in 1413 after a siege of several days . Their buildings, however, remained undamaged. Later back into the hands of the Brandenburgers, Friedrich II of Brandenburg was lord of the castle from 1441 to 1488. His descendant Margarethe von Brandenburg-Clervaux brought the castle to her husband Nicolas de Heu. When Elisabeth de Heu married Gottfried von Eltz in 1563 , she subsequently passed to his family. In the course of the Eighty Years' War, Gottfried had the complex fortified from 1595 to 1597 due to frequent raids and looting by Dutch troops .

Through the marriage of Claudine von Eltz, Clervaux Castle came to Claude de Lannoy, the Count of La Mottry and Governor of Maastricht and Namur in 1617 . Between 1634 and 1635 he had a building built in the Renaissance style with lounges and a knight's hall on the north side , thereby replacing smaller previous buildings. His family remained the owners for almost 240 years and had the castle modernized, expanded and converted into a palace. Thus, under Albert-Eugène de Lannoy, a new farm yard with stables, barns and a chapel was built outside the curtain wall . Until then, the latter had been in the pigeon tower at the northwest corner of the facility. In 1671 an apartment for the castle guards was built near the castle entrance. Although the property was to be auctioned off in 1691 to pay off war debts, the castle remained the property of the family. In 1721 a new horse stable was built next to the so-called Hexenturm , and in 1731 the brewery opposite the castle gate was built . In 1775 another renovation took place.

Clervaux Castle on a photograph from the 1880s; on the right in the picture the outer bailey, which was laid down a little later

In clapper war , an uprising Luxembourg farmers against the French occupation was Castle Clervaux for a day "theater of war". As everywhere in the country, the resistance collapsed on October 30, 1798 in Clervaux. Some insurgents had fled their French pursuers into the castle and later almost all of them were able to get to safety through a sideline . When Adrien de Lannoy, the last male representative of this family, died in 1854, an inheritance process developed that the de Berlaimont family could decide for themselves. Under Adrien de Berlaimont was 1885/87 bailey of the castle only the demolished gatehouse , the stables and the witch's tower were preserved. A small palace was built northeast of the old castle using the stones obtained during the demolition .

In 1927, the de Berlaimont family auctioned the complex. The former Minister of State Pierre Prüm and the J. Hames family became the new owners . The Hames opened a hotel in one area of ​​the castle, while Prüm set up a castle museum in the remaining part.

During the Second World War, the north wing of the complex was set on fire by German troops as part of the Ardennes offensive on December 18, 1944. The fire spread to the neighboring buildings and the castle burned down completely. After the end of the war, the Luxembourg state acquired the ruins and began rebuilding. Initially it was planned to set up a youth hostel there, but in 1972 the Clervaux municipal administration moved into the castle. Although the complete reconstruction lasted until 1994, a museum with castle models opened in 1970 in the west wing of the castle. In 1974 a museum for the Battle of the Bulge was opened ( Museum of the Battle of the Bulge, Clervaux ). After the end of the reconstruction work, a photo exhibition moved into the complex in 1994, so that Clervaux Castle is now home to three museums.

Layout of the facility

Today's palace complex consists of the former inner bailey and a gate to the southeast, which is one of the few remaining parts of the former outer bailey. The layout of the main castle is roughly oval, with the various wings surrounding an inner courtyard. The outer walls of the building complex are up to 2.1 meters thick.

The oldest structure can be found in the area with the two towers on the west side ( Burgundy Tower and Taubenturm ) and the building wing in between. They essentially date from the time before 1400. In the early 15th century, the Brandenburg Tower was built on the south side and the adjoining Gothic south wing with extensive cellars. There are three museums there today. During the Renaissance , the lords of the castle had the small buildings on the north side replaced by a large new building with a square stair tower . The great hall of this grand piano is designed in a style that shows Flemish and Spanish influences. The entire north wing is used today by the Clervaux municipal administration. After the outer bailey had been expanded and a gate was built in 1670, the semicircular witch tower was built at the easternmost point to protect the bailey and the inner bailey was surrounded on three sides by a wall.

Today three different museums are housed in the castle. One of them shows the true-to-scale replicas of the 22 most important Luxembourg castles and palaces. The 1: 100 scale models are a reminder of the importance of Luxembourg as a fortress city. The administration of the State Department for Monument Protection is responsible for the collection.

The theme of the second museum is the Battle of the Bulge during World War II. The exhibits on display in the basement of the south wing are intended to illustrate the importance of the Ardennes offensive for European history. The exhibition was conceived by the curator Fränk Kiefer together with the Cercle dʼEtudes sur la Bataille des Ardennes (CEBA). The majority of the collection, consisting of documents, weapons and uniforms, is from private owners.

See also : Museum of the Battle of the Bulge, Clervaux

The internationally most famous museum in Clervaux Castle shows the photo exhibition The Family of Man . It was compiled by the Luxembourg native Edward Steichen for the Museum of Modern Art in New York and shown there from 1955. The exhibition was then shown in 150 other museums around the world from 1955 to 1962. From 1974 to 1989, a selection of the photographs was then shown in Clervaux Castle before the exhibits had to be subjected to an initial restoration in the early 1990s . After the reopening in 1994, the photo collection was presented in full and as a permanent exhibition of the castle. It comprises 503 photographs by 273 artists from 68 countries and is still considered the largest photo exhibition of all time. It has been in the Memory of the World Register since 2003 and thus belongs to the world document heritage. After another restoration between 2010 and 2013, during which the exhibition rooms were also completely renovated and redesigned, The Family of Man celebrated its reopening in July 2013.