The German botanist Christian Konrad Sprengel discovered cross- pollination in this species in 1790 . 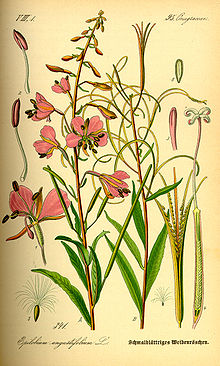 The narrow-leaved willowherb grows as a deciduous, perennial herbaceous plant and reaches heights of usually 50 to 120, rarely up to 200 centimeters. It forms a long-creeping rhizome as a persistence organ and for vegetative, clonal spread in addition to the generative via the flight seeds. The upright, round to blunt-edged and mostly unbranched stems are bare or only slightly hairy and dark purple in color to the tip.

The alternate arranged leaves are stalked short. The simple leaf blade is narrowly lanceolate with a length of about 5 to 20 centimeters and a width of 1 to 2.5 centimeters. The blue-green colored underside of the leaf shows clearly protruding leaf veins . The slightly calloused, serrated leaf margin is curved downwards.

The flowering period extends from June to August. The numerous flowers are arranged in a long, terminal, racemose inflorescence . In contrast to the mostly radial symmetry flowers of many fireweed species, the flowers of the narrow-leaved willow are a little zygomorph . The pink to purple flowers are about 2 to 3 centimeters wide. The four sepals are linear. The four lighter colored petals are broadly rounded to slightly edged and nailed briefly. The stylus, which is usually somewhat hairy at the base, ends in a four-part scar.

The capsule fruit is slender, long, fissured and red. When opening, the flaps roll back a little. The tiny seeds are long-lived.

A vegetative reproduction occurs through root shoots and through branching of the rhizome . Due to its rhizomes, the narrow-leaved willowherb is an important soil strengthener.

The flowering sequence is from bottom to top, which ensures cross- pollination . There are therefore buds , flowers and fruits on a plant at the same time - similar to what is known from the buckthorn tree . Most pollinators are hymenoptera . The numerous flowers are a good pasture for bees .

The seeds have a long head of hair and, as typical parachute fliers, can fly distances of at least 10 kilometers with a sink rate of 20 centimeters per second. Hundreds of thousands of seeds are produced per plant, which means that new areas such as clear cuts can be colonized very quickly.

The narrow-leaved willowherb is circumpolar in the northern hemisphere . The occurrences reach far to the north, in Europe as far as Scandinavia . In the Alps , the narrow-leaved willowherb can be found from the valley up to altitudes of 2000 meters (in the western Alps up to 2500 meters). In the Allgäu Alps, it rises in the Tyrolean part between Lechleiten and the Hundskopfalpe near Steeg to an altitude of 1910 meters.

This raw soil pioneer prefers clearcutting, banks, embankments, rock and block rubble, rubble and ruderal sites as a location . The lime - avoiding light plant thrives on fresh, nutrient-rich clay soils . In plant sociology, it is a class character of Epilobietea angustifolii in Central Europe and occurs optimally in Senecioni-Epilobietum angustifolii, and more rarely in societies of the Betulo-Adenostyletea class.

Coat of arms of the Yukon Territory with fireweed

It can spread very quickly in the clearing that has arisen, especially after forest cuts or forest fires . The English name "Fireweed", which is common in Alaska and Canada, is derived from this property . So there is Epilobium angustifolium also the emblem of the Canadian Yukon -Territoriums.

In the revision of the Onagraceae following modern phylogenetic analyzes , the genus Chamaenerion (as Chamerion ) was revived in 2007, after it had previously been largely discarded, and confirmed in 2011. Chamaenerion and Epilobium s. st. therefore represent sister taxa that form a monophyletic group. Therefore, both recognition as a separate genus and treatment as a genus is scientifically justified. Chamerion is usually recognized in English -speaking countries, but sometimes not in German-speaking countries.

At least two subspecies of Epilobium angustifolium are recognized:

The flowers are attractive to bumblebees and bees

The young underground and above-ground parts of the plant can be prepared as a salad or vegetables, similar to asparagus. Young, tender leaves may have a sour taste (rich in vitamin C ), but they can be mixed with mild herbs or enjoyed as a tea mixture (also known as "Coptic tea"). Russian tea or Ivan tea , in Russian also formerly Koporskij Tschaj (Копорский чай) after the village of Koporje , which used to produce significant quantities, is fermented willowherb tea . That is why the narrow -leaved willowherb is called Iwantee willow leaf in Russian (Иван-чай узколистный). The fermented tea tastes similar to the black tea, but is without theein (caffeine) and is said to have various healing effects. It was widespread in Russia before the spread of Asian black teas.

Bees that collect the pollen from Epilobium angustifolium are said to give particularly aromatic honey . The underground parts of the plant in particular are rich in tannins and mucilage . In the past (and in some cases still today) candle wicks were braided from the hairs of the narrow-leaved willowherb seeds. The North American Haida from British Columbia and Alaska processed the outer fibers of the stems to make cords, from which they in turn tied fishing nets. Other Indians used the long seed hairs to weave them together with goat wool to make blankets and cloaks. They were also used to fill pillows in ancient Russia.

Use in medicine and medical research