Schorn is a hamlet in the Upper Bavarian district town of Starnberg , which has been developing into an industrial area since the 1970s. The Bavarian State Office for Statistics runs Schorn as an independent district of Starnberg. In terms of community policy , the settlement belongs to the Starnberg district of Wangen , to whose administrative area it belonged until it was incorporated on May 1, 1978. The development of the place is divided into four. The northern quarter is occupied by commercial space, the middle is determined by the estate, which is run as an equestrian stud. On the eastern edge there is normal residential development, the south and west are determined by several villas, in one of these lots there is the former estate chapel, which can only be reached with a permit.

Schorn lies at an altitude of 650  m above sea level. NHN , about seven kilometers from the city center on the eastern edge of the Starnberg urban area. The settlement is bounded in the north and east by the community-free area of Forstenrieder Park , in the south by the corridors of the community of Schäftlarn and in the west by the Starnberg motorway triangle . Schorn can be reached via the local connecting road Wangen – Schorn. A half-way motorway connection is approved as a further connection .

The corridors belonging to the hamlet are part of the Starnberger See - East landscape protection area , 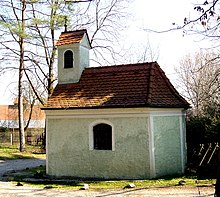 The hamlet of Schorn was first mentioned in writing in the traditions of Schäftlarn Abbey in 1140 under the name "Scorren" - which is derived from the Middle High German name for plaice . The reason for the naming was the donation from the property of the noble Mrs. Hemma to the monastery. Further mentions of this area can only be found in the monastery documents from the 16th century under the house name "Schormayr". According to this, a family of this name had already leased the property before 1579, passed it on to the next generation and was still managing it when the old monastery property passed into the possession of the Electorate of Bavaria in the course of secularization in 1803 . With an area of ​​129  hectares , Schorn belonged to Buchhof , Selcha and Heimathshausen as one of the four large estates of the monastery east of Starnberg.

A progressive development began in 1824 with the purchase of the estate by the Munich Higher Appeal Court Councilor Johann Baptist von Welsch. Just three years later, the new owner received the first prize with a Brabant plow in the category "Farmers who did the best in agriculture in 1826" at the Central Agriculture Festival in 1827 . The new weekly newspaper of the agricultural association in Bavaria reports of a high production of arable crops through appropriate fertilization, of newly laid paths lined with walnut and mulberry trees, of new large orchards and vegetable gardens that also contained asparagus beds, of the expansion of the stables for 700 merino sheep and, among many other improvements, the construction of a wine vinegar factory that processed pomace delivered from Lake Constance . In 1836, von Welsch received "The great gold medal" in the same category for further outstanding achievements on the estate, which in the meantime had grown to include a well, a brandy distillery, a grinding mill and an oil mill . The agricultural scientist Hermann von Liebig , who owned the estate between 1858 and 1875 , also achieved the best quality in his agricultural products . His sale of building land to competent employees with families who did not want to live in the servants' house caused the slow change from an estate to a hamlet.

The transformation of this agricultural production facility into an industrial area began in 1967. The owners at that time no longer sold the estate as a unit, but instead sold the parcels and buildings separately. The Milchverwertungsgesellschaft Bayerischer Landwirte acquired 45,000 square meters of the area and built a dairy factory with a cheese dairy in the early 1970s that employed 300 people. Due to sales difficulties, the company had to close 20 years later. Smaller commercial and handicraft businesses have now settled on this site, and Deutsche Post AG operates a letter sorting center on a neighboring property . The southern area of ​​the hamlet with former manor buildings and stables belongs to a riding stables.

In 2010, the Starnberg City Council decided to expand the commercial area as an urban development measure. The 43 hectare site between the Oberdill motorway maintenance facility in the north and the existing industrial park is intended to be an attractive location for high-tech companies. A commissioned investor group has acquired the necessary land and will take care of the implementation of the project in the coming years.