Solomon Burke (* 21st March 1940 in Philadelphia , Pennsylvania ; † 10. October 2010 in Haarlemmermeer , The Netherlands ) was an American Soul - and rhythm-and-blues - singer , who lived in the 1960s, the height of his popularity and also worked as a composer of hits such as Everybody Needs Somebody to Love .

The eldest of a total of seven children began to sing in his grandmother's church choir at a very early age and at the age of nine already preached to the local congregation, where he was known as the “Wonder Boy Preacher”. At the age of twelve, he traveled around the Philadelphia area and performed as a gospel singer. In 1954, his grandmother gave Burke a guitar for Christmas . In 1955 he signed up with his band, the Cavaliers , on a talent show. There the wife of a famous radio DJ became aware of Burke and in December 1955 she got him a recording contract with Apollo Records in New York , where he recorded both sacred and secular music.

Solomon Burke - Got to Get You off My Mind

The records all flopped and Apollo couldn't pay Burke, so he soon returned to Philadelphia. There he ran an aunt's funeral home for some time. After some unsuccessful recordings with Singular Records, Burke finally got a contract with Atlantic Records in 1960 . He first hit the US charts in September 1961 with the country hit Just Out of Reach . Between the recording date December 6, 1961 and the recording session on August 28, 1964, Bert Berns was the producer for Burke. During this period a total of 13 singles were released on Atlantic Records, including If You Need Me , which climbed to number 2 on the Rhythm & Blues charts , and the fast-paced Everybody Needs Somebody to Love . Ironically, the next single without Berns' producer, Got to Get You off My Mind , released in February 1965, became Burke's biggest hit at number 1 on the R&B charts and number 22 on the pop charts . By 1969 Burke was able to place various songs in the hit parade, including another number 2 placement Tonight's the Night . Burke influenced singers like Mick Jagger , Rod Stewart and Tom Jones . In 1965 he toured Europe for the first time, and his concerts were usually very well attended. 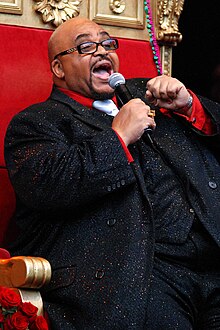 After seven years at Atlantic, Burke moved to Bell Records in 1969 . Many other label changes followed in 1970/71, but the successes decreased noticeably. In 1972 Burke disappeared from the charts for good. In 1975 he left the music business completely after a final release on Chess Records . He only returned to the music scene nine years later. He toured North America and Europe and continued to have a lot of fans, but his releases were no longer notable for success.

After the 1987 album Love Trap received miserable reviews, Burke withdrew again into his community and initially stopped publishing. He built his own funeral home, had 21 children and eventually became a great-grandfather. In 1992 he came up with the idea of a Blues - album record and signed with Black Top Records . In 1993 the album Soul of the Blues was released , which received excellent reviews. In the same year he received a Pioneer Award from the R&B Foundation. In 1994 he received a W. C. Handy Award for his album Live at the House of Blues . In 1996, Burke's biography of George Kidneyberg was filmed as Sweet Inspiration and in 2001 he was inducted into the Rock and Roll Hall of Fame .

In 2002 he released the Joe Henry produced album Don't Give Up on Me , which was released on Fat Possum Records. The songs came from a. by Van Morrison , Tom Waits , Elvis Costello , Joe Henry and Nick Lowe . For this he got a Grammy in the category Best Contemporary Blues Album . In the following years he was nominated three times in this and twice in other categories for another award. In 2003 he received the Living Blues Award in the categories of Best Live Performer and Most Outstanding Blues Singer.

Like a Fire was the name of his 2008 album on Shout! / Soulfood. The songs came from a. by Eric Clapton . Burke dedicated the album to his late daughter Michelle. In 2010 he released the album Nothing's Impossible on E1 , which received the 2011 Blues Music Award for best soul-blues album. Burke himself was honored as the best soul blues artist that year.

On October 10, 2010, at the age of 70, he died probably of a heart attack on an airplane shortly after the plane from Los Angeles landed at Amsterdam Airport . He left 21 children and 90 grandchildren.