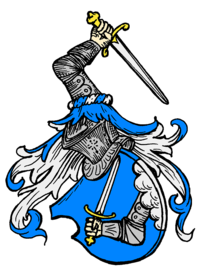 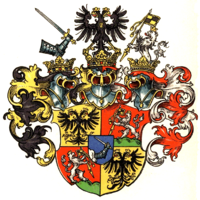 Baron coat of arms of the von Sporck family from 1647

Sporck , also Sporckh , is the name of an old Westphalian family who sat on the Sporckhof near Westerloh in the Delbrück region in the prince-bishopric of Paderborn . In the 17th century it achieved the status of imperial count and acquired considerable property in the Kingdom of Bohemia .

Swéerts-Sporck Palace in Prague , built in baroque style from 1694 to 1699, renovated in a classicist style in 1783

The family comes from Westphalia. The documented trunk series begins with Franz Nolte ( called Sporck), owner of the Sporckhof, documented in 1597, † 1626. He was married to a daughter of Jobst Sporck, the former owner of the farm. The Sporckhof, a Bardenhauerstätte (Viertelmeier), was equal in importance and size to a Meierhof . One of Franz Sporck's younger sons, Johann Sporck (* around 1600, † 1679), became an officer and rose to become Imperial Field Marshal and Imperial Count . He fought in 1620 in the Battle of the White Mountain , in which his older brother fell as a cavalry champion . In his first marriage he had since 1639 with Anna Margaretha Linsingen (* 1610, † 1657) married his second wife since 1660 with the Mecklenburg, Eleonora Maria Katharina of Fineck (* 1639, † 1674).

Franz Karl Rudolf Freiherr von Sweerts and Travels (* 1688, † 1757) from Brussels patrician family whose father Franz Johann von Sweerts-Reist 1654 the Bohemian Inkolat had received had since 1712 with Franz Anton von Sporck daughter, his cousin Anna Katharina, married . On his mother's side he was a grandson of Count Johann von Sporck . As the heir of his uncle, adoptive father-in-law and father-in-law, he received the city palace in Prague's New Town, later known as Palais Swéerts-Sporck, along with other Sporckian goods . He got for himself and the descendants from the marriage with the Sporck heir daughter on December 15, 1718 in Vienna the Bohemian count status as well as the name and coat of arms association with those of the Count Sporck as Count von Swéerts-Sporck . The Swéerts-Sporck family, which received the Landmannschaft von Krain on December 12, 1819 , still exists today.

Family coat of arms of those of Swéerts