The Catholic parish church of Saint-Aspais in Melun , a municipality in the Seine-et-Marne department in the French region of Île-de-France , was built in the 15th century in the Flamboyant Gothic style. The church consecrated to St. Aspasius of Melun was added to the list of architectural monuments in France in 1914 as Monument historique . The lead glass windows from the Renaissance were listed as a historical monument in 1906.

A predecessor of today's church is already documented from 1080. In 1420, during the siege by the English during the Hundred Years' War, the bell tower was badly shaken; in 1468/69 it was rebuilt.

At the end of the 15th century the old church had become too small and it was decided to build a new one. The nave and west facade were built in 1506. In 1517 Jehan de Felin, who had built the Saint-Jacques-de-la-Boucherie church in Paris a few years earlier , was appointed as a builder. Under his successor, the construction work was completed ten years later.

After the vaults had partially collapsed in 1598 and 1673, the architect Daniel Gittard led the reconstruction from 1675. After another collapse, which occurred in 1677, Nicolas Sueur took over the management of the construction work.

During the French Revolution from 1793 to 1797 the church was used as a saltpetre factory . An extensive restoration was carried out in 1868/69 and a sacristy was added to the north side of the church . In August 1944, during the struggle to liberate the city from German occupation, the church suffered considerable damage. The restoration dragged on for over ten years. The last renovation took place in 1991.

On the west facade, the bell tower rises above the first northern bay . The choir , behind which one of Melun's main axes runs, barely protrudes over the aisles. In the side aisles, to the right and left of the choir, portals designed in the style of Flamboyant Gothic have been cut. Both portals are spanned by canopies , which are crowned with crab-studded finials . 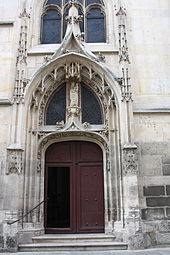 Opposite the portal was the former Hôtel du Coq, a no longer existing building. In the middle of the tympanum , a sculpture of a Madonna and Child is placed in a niche.

Left side portal at the choir

Three figure niches have been cut into the tympanum of the left side portal, of which only the base decorated with foliage and the filigree canopies have survived. The archivolts are adorned with openwork tracery arches , vines loop around music-making angels and mythical creatures.

The church is built over an irregular, trapezoidal floor plan. The nave is divided into four bays and has five naves at its widest point. It goes into the choir without a transept. The two-storey elevation with an arcade zone and ceilings windows corresponds to the churches built in Paris at the same time in the Gothic style.

In the south aisle three Gothic, from one are trefoil arches framed Piscinas installed in wall niches. On a pillar of the north aisle is another, heavily damaged piscina, which is decorated with arabesques in the Renaissance style .

The keystones of the vault are also decorated with Renaissance décor.

The windows, installed around 1530 , are attributed to Jean Chastellain's workshop. Some of the windows were destroyed when the choir vault collapsed in 1677. During the Second World War , the windows were removed and, from 1950 to 1968, the glass painting Jean-Jacques Grüber in Paris restored and reinstalled them. 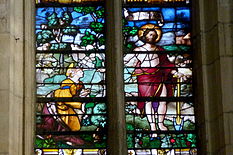 Creation of the stars

The left lancet of the apse window (window 1) is dedicated to the creation of the world. On the right lancet (window 2) the creation of man, the fall of man and the manslaughter of Abel by his brother Cain are shown. The panes of the middle lancet (window 0) depict episodes after the resurrection of Jesus: the unbelieving Thomas puts his finger into the wound of Jesus, the disciples of Emmaus , Jesus appears to Mary Magdalene ( Noli me tangere ). The lower scene, in which Jesus blesses his mother Mary, was added in the 17th century.

On the left side of the window, the Archangel Michael is depicted with a sword in his hand and dressed in armor, at his feet lies the defeated Lucifer . On the right side you can see St. Nicholas of Myra and in the background the scholars he rescued rise from the salt barrel.

The window with scenes from the life of St. Lupus , who was Bishop of Sens from 609 to 623, is inscribed. It shows that the window was donated in 1527 by the Lupus Brotherhood, to which the butchers belonged. Butcher's knives are shown on the two small upper discs in the tracery. Melun Castle can be seen on the right outer edge of the window. In the lower part, a list of the pastors of Saint-Aspais was added around 1900.

The window with scenes from the life of St. Francis of Assisi is dated from 1530 by a deed of donation.

The episodes can be seen on the window with the story of Joseph : Joseph is sold by his brothers, Joseph flees from Potiphar's wife, Joseph appears before the Pharaoh , Joseph reveals himself to his brothers. The window is dated to the middle of the 16th century. It was created by either Jean Chastellain or his successor Nicolas Beaurain , of whom there is a similar window in the Saint-Merry church in Paris. The scene in which Joseph flees from the staggers of Potiphar's wife is based on an engraving by Marcantonio Raimondi after a painting by Raphael .

The two windows on the west facade were put together from older fragments. The scene of the Annunciation can be seen on the right lancet of the right window, on the left perhaps the resurrection of Christ.

Cilicium of Louis the Saint