The St. Andreas Basilica is one of the twelve large Romanesque churches in Cologne . It is located in the Altstadt-Nord district and is a few minutes' walk from the cathedral . Since January 1st 2010, St. Andreas is no longer a parish church, but a branch church of the Catholic parish of St. Aposteln .

Stair tower to the crossing tower (2019)

St. Andreas is a three-aisled pillar basilica that contains Romanesque and Gothic elements. The location of St. Andreas probably goes back to an early Christian chapel with the name St. Matthaeus in fossa (St. Matthäus am Graben).

Historical documents attest to the founding of a canon monastery dedicated to St. Andrew in the second half of the 10th century ; the early Romanesque church building with crypt, initiated by Archbishop Bruno , was consecrated by Archbishop Gero in 974 to St. Andrew as patron saint. We only know of the larger new or extension of the 11th century, some of it is included in the existing Staufer church.

In the western parts of today's church, essential parts of the late Romanesque, Staufer new building from the 12th and 13th centuries have been preserved; in the 14th century, Gothic chapels were added to the side aisles of the nave. A century later, the Romanesque east choir and the crypt (link leads, among other things, to the picture of the same) in favor of a Gothic choir hall - built on the model of the Aachen choir hall - demolished. The reconstruction of the northern cross arm followed around 1470/80, while the southern cross arm was completely rebuilt in 1492 in a late Gothic form. The Romanesque crossing tower with its folding roof is significant . The two stair towers to the crossing tower, which were moved inwards with their outer facades in the course of the renovations in the Middle Ages, still come from the Salian building.

In 1802 the monastery was secularized . Before the demolition of the neighboring Dominican Church in Cologne , the remains of Albertus Magnus (1200–1280) and important pieces of equipment were transferred to the St. Andrew's Church, which became the parish church. As a result of the secularization of the Machabäerkirche, the late medieval shrine with the relics of the Maccabees also came there .

In the course of the 19th century the abbey buildings were demolished and the church was restored with neo-Romanesque corrections. The two architects Heinrich Nagelschmidt and Julius Raschdorff developed the historical concept and directed the restoration. The cloister in the west of the church was demolished in 1843 except for the east wing, today's entrance hall. The choir apex windows were renewed from 1899 by the well-known Cologne glass painting workshop Schneiders & Schmolz .

Roman sarcophagus with the bones of Albertus Magnus in the crypt of the St. Andreas Church in Cologne (2004)

The damage caused by the Second World War was largely repaired by 1947. In the 1950s, the exterior including the folding helmet on the tower was restored. As if by a miracle, despite the destruction during the war, the valuable medieval wall paintings in the chapels of the aisles were preserved.

From 1953 to 1955, parts of the 11th century crypt under the east choir were uncovered by Karl Band , modernized and expanded to include a burial chapel for St. Albertus Magnus, whose bones have rested there in a Roman sarcophagus since November 25, 1954.

A comprehensive interior and exterior restoration took place from 1992 to 1997. From 2005 to 2010 Markus Lüpertz created a colorful, twelve-part glass painting cycle in the Gothic windows of the north and south transverse arms.

In 1947 Archbishop Joseph Frings gave the Dominicans the pastoral care of St. Andreas. In 1957 the Archdiocese of Cologne made the church available to the Dominicans as a monastery church. On the 700th anniversary of the death of St. Albertus Magnus (November 15, 1980), Pope John Paul II visited the saint's tomb.

Order of Knights of the Holy Sepulcher

Since the founding of the German Lieutenancy of the Knightly Order of the Holy Sepulcher in Jerusalem on December 8, 1933, St. Andrew has been the order church of the Papal Lay Order. On the Fridays of the Sacred Heart of Jesus , the members of the Cologne Commandery of the Holy Three Kings gather for Holy Mass in their religious order church of St. Andrew. 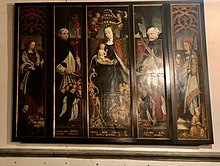 The sculpture of St. Christophorus by Master Tilmann and that of the Madonna of the Rosary, which was donated by the Apostolic Nuncio on the occasion of the foundation of the Arch Brotherhood in 1475, are still from the Middle Ages . Mary carries the blessing baby Jesus, who holds the globe in her hand. The color scheme as well as the silver crowns and the scepter from the church treasury are modern. The late Gothic apostle shrine on the high altar, which comes from the Johanniskirche in Niederlahnstein , has the usual shape of a Gothic chapel. The tempera paintings show the Holy Bishops Martin and Dionysius, for whose bones the shrine was originally made. From 1859 to 1954 it contained the relics of Albertus Magnus. Since 1954 the shrine has housed the arm relic of the apostle Andrew, to whom the church is dedicated. In addition, frescoes from the late Middle Ages and a Pieta from the late 14th century have been preserved in the north transverse arm. Mary is represented here rather young in a robe with lavishly decorated hems. Also worth seeing is the altar panel of the Rosary Brotherhood (also Madonna with the Cloak or Protective Cloak Madonna ) of the Master of St. Severin from the early 16th century and the so-called blood fountain of St. Ursula in the vestibule. In the southern cross arm is the Maccabees Shrine, which was commissioned in 1520 and completed in 1527. The client was the confessor Helias Mertz of the Benedictine monastery of the Holy Maccabees on the Eigelstein, which was closed in 1803. Both the blood fountain and the Maccabees shrine come from this Benedictine monastery.

Gilded copper plates form the Maccabees shrine, which according to tradition is supposed to contain relics of the seven holy Maccabees and their mother Salome ( 2 Makk 7  EU ), dates from the 16th century and looks like a church. The around 40 reliefs show scenes from the martyrdom of the Maccabees and their mother Salome, which are set parallel to the Passion of Christ and his mother Mary (for example, through the flagellation of the Maccabees and Christ). At the corners of the roof the four evangelists are depicted in contemporary humanist costumes: Matthew , John , Luke and Mark . On the corner pillars are figurative representations of Christ , Helena , Mary and a priest. This shrine was created by Peter Hanemann.

The tomb of St. Albertus Magnus

The bones of the theologian, church doctor and natural scientist Albertus Magnus have been lying in a Roman sarcophagus in the extended crypt (here also a picture of the sarcophagus in this) below the crossing since 1954 .

Wilhelm Ruppert jr. Window donated in 1956 was created in 1954 by the glass painter Jakobus Melchior and shows episodes from the life of St. Albertus. It was removed in 2006 in favor of the Lüpertz window.

In the 1990s, the idea of ​​having the artist Markus Lüpertz design new windows for the windows in St. Andreas that were destroyed in the war and replaced by white glass matured . The first window was installed in the Maccabees' choir in December 2005. In 2007 two more windows were inaugurated. It is a depiction of the Passion of Christ and the Old Testament Maccabees. A total of twelve windows were designed by the artist. The southern Maccabees choir was finished by the end of 2008, and the northern Marian choir in summer 2010. The windows cost a total of over 1,000,000 euros, one segment 4,800 euros; they were entirely financed by donations through the Friends of Roman Churches in Cologne .

The organ was built in 1995 by Gert Weyland (Opladen) based on a disposition draft by the Cologne cathedral organist Clemens Ganz . The instrument has a total of 45 stops , including 2 group slides (No. 20 and 33). The Spieltrakturen and Koppeltrakturen are mechanically, the key action is electric.

There are also two smaller organs in St. Andreas. In the high choir is a chest organ by Gert Weyland (Opladen); The instrument has 5 registers on one manual (Gedackt 8 ', Rohrflöte 4', Schwegel 2 ', fifth 2 2 ⁄ 3  ', third (only treble) 1 3 ⁄ 5  ') and a transposition device. Since 2005 there has been a positive in the crypt from the organ builder Willi Peter (Cologne); it was built for the Protestant St. Thomas Church in Cologne and also has 5 stops on one manual (covered 8 ', reed flute 4', principal 2 ', fifth 1 1 ⁄ 3  ', mixture); the crypto-positive can be swelled using plexiglass blinds.

The four church bells were cast in Gescher in 1955 by Hans Hüesker ( Petit & Gebr. Edelbrock ) . They hang in a two-story steel belfry on wooden yokes in the crossing tower. The bell arrangement results in a Doric tetrachord .

The ringing motif of the four bells is Tui sunt caeli ("Your are the heavens", offertory of the Missa in the at Christmas, e ded e efgfefed fdefe)

The chime differentiates between the individual times in the church year . It distinguishes working days from Sundays and these from high festivals . At midday the little bell 4 rings a prelude 30 minutes before the beginning. The remaining individual bells and partial chimes are divided as follows:

Church music is ideally and financially supported by the Association of Friends and Patrons of Church Music at St. Andreas .