Former synagogue in Müllheim at the end of the 19th century

The synagogue on Hauptstrasse in Müllheim , a town in the Breisgau-Hochschwarzwald district in Baden-Württemberg , was built in 1851/52. In 1938 its interior was destroyed and in 1968 it was demolished. 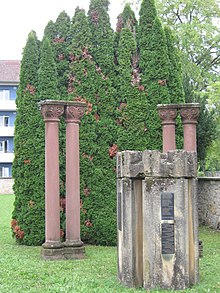 Remains of the Müllheim synagogue in the Jewish cemetery there, September 2009

Müllheim belonged to the margraviate of Baden until the beginning of the 19th century , and a relatively large and important Jewish community existed here until 1939/40 . Its creation dates back to the beginning of the 18th century ; under certain circumstances, however, already lived in the 15th / 16th Century people of Jewish faith here.

The Jewish community in Müllheim had various prayer rooms in private houses since the beginning of the 18th century , the first of which was in the house of the Zivi family in Müllheims Hauptstrasse 115. Around 1753, 13 families of Jewish faith lived in Müllheim's upper and lower town.

In 1851/52 a stately new building was built in place of the prayer house for 12,000 guilders according to plans by the Freiburg architect Georg Jakob Schneider .

In 1938, the interior was completely destroyed in the November pogroms . The only reason the building was not set on fire was to spare the property of the neighboring non-Jewish families.

The synagogue building survived the Second World War ; after the war, like the local Jewish cemetery, it was restituted to the Israelite religious community of South Baden . With the approval of the municipal council on February 21, 1949, Müllheim bought the synagogue from the Baden Israelite Council for 10,000 marks .

On November 21, 1961, the councilor of the city of Müllheim announced that there was no objection to the demolition of the desecrated synagogue.

In 1968 the remaining ruins, which had been in the possession of the city since 1941, were completely demolished after a municipal council resolution with the consent of the upper council, although the building fabric would have been suitable for renovation. During the demolition, the foundation stone with documents was recovered under the Torah shrine .

Today there is a parking lot on the former site of the synagogue, with the memorial in the southeast corner.

At the Jewish cemetery in Müllheim, the wall and other remains of the synagogue are placed in sculptural form in the form of an "idea sculpture", including a memorial stone with the names of soldiers of Jewish faith from Müllheim who died in the First World War; on the rest of the crown of a former corner tower of the synagogue, there are memorial plaques on all four sides: two lists of former Müllheim Jews murdered in Auschwitz in 1942 , a list of “fellow citizens who fell victim to the Nazi terror” and a list of those in Theresienstadt and Jews from Müllheim who died, murdered, lost or fell victim to euthanasia elsewhere . 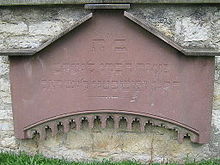 A fragment of the demolished former synagogue in Müllheim (presumably a lintel window ; today on a wall at the Jewish cemetery in Müllheim)

The architect Schneider had completed his first synagogue building in Kippenheim in 1851 . There were many similarities between the two synagogues:

Both synagogues were characterized by the round arch style, with both a centrally raised triple portal opening into a small vestibule. The portal inscriptions were identical and read: This is nothing more than a house of God ( Genesis 28). The facade was divided into three parts by wall templates and the gable was provided with a rising battlement frieze . An acroterion in the form of the tablets of the law crowned the ridge . The vertical threefold structure of the entrance facade was emphasized on the upper floors by the double repetition of the triple arch in smaller proportions and the round window in the top of the gable. In addition to the corner turrets protruding from the side of the gable, narrow rectangular windows could be seen that gave light to the two stairways leading to the women 's galleries.

The entire building was encompassed by a cornice and sill at the height of the first floor. On the eaves sides there were initially round arched windows and overhead coupled windows that were crowned with round windows.

Memorial stele with wreath laid down close up, February 2016

In 1973, a memorial in the form of two small walls with a memorial stone was erected on the site of the old synagogue from the stones found during the renovation of the parking lot that had been created at the site . The memorial stone stylizes a seven-armed candlestick ( menorah ) and bears the Jewish greeting of peace in Hebrew script on the left, shalom , on the right the inscription : In memory of their Jewish fellow citizens, whose house of worship was on this site. The citizens of the city of Müllheim.

Synagogues in the Breisgau-Hochschwarzwald district