The Shard , also Shard London Bridge (formerly London Bridge Tower , also Shard of Glass , of English shard , shard ',' splitter ') is a skyscraper in London's district of Southwark , the 310 meters from July to October 2012, the tallest skyscraper Europe was the tallest skyscraper in the EU until January 31, 2020 . The start of construction was delayed on March 16, 2009, the inauguration was on February 1, 2013. The final construction height of 309.6 meters was reached on March 30, 2012 by placing a steel point as the last component. The client was the former fashion manufacturer and today's real estate investor Irvine Sellar, in whose real estate company Shard Funding Limited the Gulf State of Qatar acquired a majority stake of 95%. Since the state assets of Qatar are synonymous with the private property of the ruling Al Thani family , they belong to the Al Thani family's London real estate portfolio.

As early as the early 1990s, there were plans for a new high-rise in the London borough of Southwark on the south bank of the Thames . The original design envisaged a cylinder-shaped skyscraper over 400 meters high, which would become the third tallest skyscraper in the world. However, the draft met with little approval from the public and the responsible authorities. Finally, the architect Renzo Piano was commissioned with a new design. This now envisaged a 309.6 meter high, pyramid-shaped building. In the course of the planning there were protests from critics who said that such a building opposite the city would damage the cityscape.

At the end of 2003, the authorities issued the building permit. In the summer of 2004, the demolition of the first buildings on the site began. Surprisingly, however, a few months later there were problems with the purchase of further required building space, as an owner refused to sell. An agreement was finally reached in July 2005 so that the remaining buildings could be demolished in the course of 2006. Due to this delay, the start of construction from May 2005 had to be postponed to the beginning of 2007. Further delays resulted from the departure of all investors due to the global financial crisis from 2007 and postponed the start of construction to March 2009 and completion to May 2012. The external structure was completed in early April 2012.

The inauguration took place on July 5, 2012 by Sheikh Hamad ibn Jasim ibn Jabir Al Thani , Prime Minister and Foreign Minister of Qatar, and the Duke of York, Prince Andrew Albert Edward . The inauguration date was particularly important as it was to coincide with the Queen's Diamond Jubilee and was just weeks before the 2012 Olympics, which were held in London that summer. The viewing terrace has also been open to the public since February 1, 2013, and the hotel was opened in 2014.

The Shard has 72 usable floors and is 309.6 meters high. This made it the tallest skyscraper on the European continent before the Mercury City Tower (338 meters) was inaugurated in Moscow at the beginning of November 2012 . When it was completed, The Shard towered over the Moscow Capital City Tower by around 10 meters and the Commerzbank Tower in Frankfurt am Main by more than 50 meters.

The building, completely glazed with 11,000 panes, is pyramid-shaped and tapers narrowly towards the top. The area of ​​the glass facade is 56,000 m². The building is intended for the following use:

The Shard Plaza on the ground floor is furnished with plants and offers seating. Above is a 460 m² area with shops and direct access to the waiting room at London Bridge Station, one of London's main railway stations.

The lower 28 floors of the skyscraper are intended for offices; it has 55,000 square meters of office space. Above there are three floors with publicly accessible luxury restaurants, above a five-star hotel of the Shangri-La chain with 200 rooms. This is followed by 13 floors with ten luxury apartments with all-round views (which cost the equivalent of 63 million euros each) and, at the very top, the viewing platform. The hotel will open in spring 2013 and the entire building should be fully occupied by the end of 2014.

Above the 72nd floor at a height of 244 meters is the Spire ( English for spire ) with technical facilities, such as the air conditioning , which are not accessible to the public. 6 of the 15 floors of the top are potentially usable. The Spire was constructed from 800 individual steel parts, weighs around 500 tons, is 66 meters high and was set up by the largest crane in Great Britain.

There are 44 elevators and 306 stairs in the entire high-rise .

The Shard in the London skyline during its 2012 construction

Aerial view of "The Shard"

Renzo Piano's design began with the ambition to become the new defining landmark on the London skyline. The construction of the London Bridge , which looks like an elongated pyramid made of glass , attracted a lot of criticism. The clusters of skyscrapers in Docklands and the City of London , the world's most important financial center where Norman Foster's Gherkin is located, are located away from the city panorama. But if you look down on London from Parliament Hill in the north-west, then the skyscraper puts St. Paul's Cathedral in the shade and makes it appear dwarfed.

The building has led to the formation of the term "oligarchitecture". In the Guardian one was "Shardenfreude" complains because the splitter form of the skyscraper would have led to many other questionable and counterfeiting in the capital.

The Shard is the highlight to date and the prime example of a development in London's urban architecture that architects believe has gotten out of control . In an open letter in April 2014, 80 architects, town planners, artists and engineers turned against this development. 236 new high-rise buildings with more than 20 floors are planned or are already under construction. These structures threatened the unique character and identity of London. There is no skyline commission that oversees and regulates the entirety of the high-rise development. In response, the architecture critic Rowan Moore established a debate in the Observer and Guardian called The London skyline debate that lasted until August 2016 . 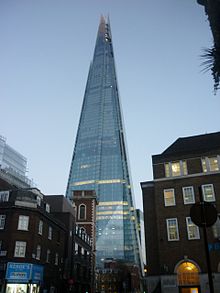 Commons : The Shard  - collection of images, videos and audio files