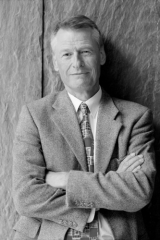 Thomas Friedrich Gruber (born February 5, 1943 in Eislingen / Fils ) is a German media scientist. From 2002 to 2011 he was director of Bayerischer Rundfunk .

From 1978 to 1981 he worked as a media officer for the then Schleswig-Holstein Prime Minister Gerhard Stoltenberg in Kiel .

From 1981 he worked as assistant to the television director at Bayerischer Rundfunk in Munich .

In 1984 Gruber took over the management of the “Family” editorial team on Bavarian TV and was responsible for the youth program Live from Alabama .

In 1986 he became head of the main directorate department of Bayerischer Rundfunk. From 1990 he headed the BR-Studio Franken , headquartered in Nuremberg .

From 1995 to 2001 Gruber was BR radio director, and in 1995 and 1996 also chairman of the ARD radio commission. Since 2002 he has been director of the BR. In the election for this office in July 2001, he prevailed against the competitor Gerhard Fuchs , who had been favored by Prime Minister Edmund Stoiber .

In 2003 he was appointed honorary professor at the Otto-Friedrich-Universität Bamberg with the field of media management and cultural mediation and in the same year he was appointed head of Department I “Communication and Media Studies” at the University of Television and Film in Munich. He has been a member of the University Council of the Friedrich-Alexander-Universität Erlangen-Nürnberg since 2007 as well as a member of the board of the MedienCampus Bayern and since June 2008 a member of the Senate of the Max Planck Society.

Director of the Bavarian Broadcasting Corporation