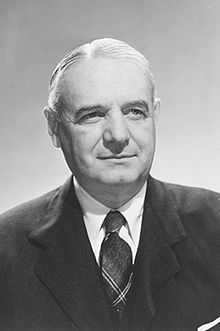 William Joseph Donovan (born January 1, 1883 in Buffalo , New York , †  February 8, 1959 in Washington, DC ) was an American lawyer and secret service employee. From 1941 he was intelligence coordinator on the staff of President Franklin D. Roosevelt , then from 1942 to 1945 head of the Office of Strategic Services .

Donovan came from a conservative family of Irish descent, he was a practicing Catholic. He studied law at Columbia University in New York , where he graduated in 1905. On the university football team, he was nicknamed "Wild Bill", which he retained. In the subsequent time at Columbia Law School he met the future President Franklin D. Roosevelt know, which was of great use to him in his further career. Donavan initially practiced as a lawyer , his participation in the New York law firm "Donovan, Leisure, Newton and Irvine" existed after the end of his political career.

In 1912 he took over a force of the National Guard , which was then deployed on the Mexican border in 1916 on the occasion of the imminent punitive expedition against Pancho Villa . During the First World War he led the 165th Regiment of the 42nd American Division in France, first as Lieutenant Colonel , later as Full Colonel . Among other things, he received a Medal of Honor , the Distinguished Service Cross and three Purple Hearts . After the war he was one of the founding members of the American Legion .

Donovan joined the US Department of Justice in 1924

From 1922 to 1924 Donovan worked as a federal attorney for the western district of New York, where he was known in particular as a staunch advocate of Prohibition . As a member of the Republicans , he also ran several unsuccessful elections to political office. In 1932 he ran for lieutenant governor of New York and in 1932 for governor . President Calvin Coolidge also appointed him as a member of his Anti-Trust Commission. He was also chairman of the Rio Grande Compact Commission.

Although in the other party, Franklin D. Roosevelt entrusted him with various tasks in his presidency, including from 1941 as Intelligence Coordinator ( COI ), the first secret service not linked to the army . He previously served on the President's special mission in Great Britain and Southeast Europe. He may have been involved in the 1941 Yugoslav coup , which delayed the start of Operation Barbarossa by four to ten weeks. On March 20, 1942, he received a report from a subordinate of the Chilean ambassador in Prague , Gonzalo Monti Rivas, who had remained there after the German occupation of the Czech Republic (March 15, 1939) and who had written the report on November 24, 1941. The report stated what plans Adolf Hitler had with the Jews .

From 1942 to 1945 he was head of the COI successor Office of Strategic Services and was now subordinate to the Combined Chiefs of Staff . In 1943 he met the head of the German Abwehr , Admiral Wilhelm Canaris , in the Spanish port city of Santander to discuss whether the OSS could support the German resistance against Hitler . Donovan had built an OSS network in Spain, tolerated by the Spanish authorities under Franco , who at that time already assumed that the Germans would lose the war. Donovan was also informed about the opposition to Hitler through the Bernese OSS resident Allen Dulles , who was in contact with middlemen of the German resistance. In the last year of the war, several American newspapers accused him of not having acted vigorously enough against sympathizers of the Soviet Union under Stalin in the OSS . With the end of the war, the existence of the OSS also ended, with the end of Roosevelt's presidency the political influence of William Donovan as far as possible.

His penultimate "appearance" on the political stage was as assistant to Robert H. Jackson , the American chief prosecutor at the Nuremberg trial of the major war criminals . But he fell out with this. Donovan saw the risk that a " show trial ", due to the retrospective application of new law, could permanently shake the Germans' confidence in the Western Allies. The German resistance fighter Fabian von Schlabrendorff was one of his advisors in Nuremberg . This led Donovan to campaign for the Katyn massacre , which the Soviet side had put on the list of German war crimes , to be removed from the indictment.

After the end of his political career, Donovan initially worked as a lawyer in his law firm in New York. In 1948 he acted as a founding board member of the American Committee for a United Europe (ACUE), of which he was the first managing director. The organization implemented the establishment of the Council of Europe . He was also an assistant to Dwight D. Eisenhower during his tenure as President of Columbia University. In 1952 he applied to head the CIA , but his intimate enemy J. Edgar Hoover played a decisive role in thwarting this plan. From September 1953 to August 1954 Donovan headed the US embassy in Thailand .

After a series of strokes , he had to give up his position as ambassador and returned to the United States in 1954. In the last years of his life his health deteriorated noticeably and he was largely unable to work. Donovan finally died on February 8, 1959 at Walter Reed Hospital in Washington. Because of his merits, he was buried in Arlington National Cemetery in Arlington , Virginia .

Donovan's estate can be viewed online in the Donovan Nuremberg Trials Collection at Cornell University .