Luther's interpretation of Psalm 6 in the Wolfenbüttel Psalter

The Wolfenbüttel Psalter is a Latin psalter printed in 1513 with handwritten notes by Martin Luther . This manuscript is kept in the Herzog August Bibliothek Wolfenbüttel and bears the signature Cod [ex] Guelf [erbytanus] 71.4 Theol. 4 ° . Together with 13 other early writings of the Reformation movement it belongs since 2015 German World Documentary Heritage of UNESCO .

On June 8, 1513, Luther had a Latin psalter printed by Johann Rhau-Grunenberg in the Wittenberg workshop especially for those listening to his psalm lecture; the edition cannot be determined. Such working texts for the hand of the students corresponded to humanistic customs. It was the first book ever that Luther, who was still little known at the time, had it printed, and he chose a psalter from Melchior Lotter's Leipzig workshop as a template for the printer , which was actually intended for liturgical use. His listeners were Augustinian hermits who, like Luther himself, read and sang many psalms every day in the divine office .

Suitable for use in Luther's lecture, Rhau-Grunenberg printed this psaltery text in a special way: with large line spacing and wide margins so that the students could enter explanations of words and factual explanations ( glosses ) . According to tradition, Luther added headings (tituli) and short descriptions (summaries) to the individual psalms . The fact that there is also a preface to the entire Psalter written by Luther corresponds to tradition; What is original, however, is that Jesus Christ appears as a speaker in the foreword Praefatio Ihesu Christi (see #quotes ), who is identified as the gate and key to the book of Psalms through quotations from the Old and New Testaments . This foreword is the oldest document of Luther's interpretation of the Bible. 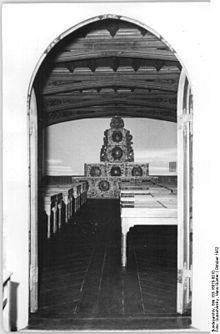 The large lecture hall in the Augustinian monastery in Wittenberg ; in the background the baroque cathedral of the university. Not the lecture hall from 1513, but a place of remembrance for Luther's lectures. Photo 1952

Only one copy of this psalter print by the Rhau-Grunenberg workshop has survived, namely Luther's personal copy , which Luther had filled in with his own notes, some of which were only one millimeter in size. Together with the Dresden psalm scholien manuscript , Luther's first psalm lecture can be reconstructed from this, which probably began on August 16, 1513: Luther gave an opening speech, distributed his working texts and then the scientific work began in the form that Luther made his own handwritten notes Students dictated into the pen (hence the name Dictata super psalterium ). He was free to choose which psalms to work on - by no means all of them - and in which order. He worked out extensive digressions that did not fit in the margin of the Psalter as scholias , which he read from the manuscript preserved in Dresden. The lecture probably ended on October 21, 1515.

In 1516 Luther revisited his scholias to prepare them for printing; but he soon broke off this work and regarded the first reading of the psalms afterwards as an outdated early work. The effect of the manuscript on his contemporaries was therefore very small.

"As documents of the transition - from late medieval piety theology to the beginning Reorientation - they [the Wolfenbüttel Psalter and the Dresden Scholien] are of sensational importance for the development of the work and thought process of the young Luther."

The following motifs typical of Luther can already be found here:

The fact that such a manuscript for use, which had no binding, was preserved at all is due to the collecting of autographs , as was done in Wittenberg in the later years of the reformer's life. Every line in Luther's own hand was valuable to his followers, all the more so when it came to a Bible text. Luther, who of course knew this, gave away books that he no longer needed to good friends.

The Bremen senior or superintendent Jacob Probst received the Wolfenbüttel Psalter as a gift (probably around 1542, when he became the godfather of Luther's daughter Margarethe) and in turn gave it (around 1560) to the Landsknechtsführer Hans Hundemann von Hildesheim . At this point in time the first leaves of the Psalter with Psalm 1 to 3 were lost and the strict Lutheran Tileman Heshusius replaced them with his own interpretations of the psalm. During the theological debates of the time, the book was guarded by a group of Orthodox Lutherans in Bremen as a 'golden treasure' and received a protective cover and matching additions: medallions with the portraits of Luther and Melanchthon, a woodcut of Luther as a monk and a colored picture of Jacob Probst.

Cyriakus Spangenberg mentioned in 1570 that Hans Hundemann had left the Psalter to him for a while. The subsequent stages of the manuscript up to its inclusion in the Augustan manuscript collection in Wolfenbüttel (around 1640) are not known. In this large library the psalter was forgotten until it was rediscovered around 1710 by the Husum pastor Johann Melchior Krafft . Krafft had read the following from Johannes Wigand :

"I have the firstfruits seen Lutheri as He, He still in the cowl fitted, read the gantzen Psalter with such Aufmercksamkeit that he him word for word with his own hand glossiret , [...] I have his Autographa had in my hand , and seen through with amazement. "

Having become curious as a result, Krafft used a trip that took him to Wolfenbüttel to see “the excellent Hoch-Fürstl. Visiting the Braunschweig-Wolfenbüttelische Bibliothec for a few days in order to collect the most possible of it for my own purpose, as from many others, was lucky to find the above original copy [...] "although it was" very hidden and how completely hidden. " Krafft goes on to describe how he read Luther's glosses in this Psalter: “Very nicely and finely written through and through with his own hand.” In keeping with the bicentenary of the Reformation in 1717, the Husum pastor advocated an edition of the manuscript. This did not happen until 1743 as part of the so-called Walchischen Luther edition in Halle . When it was returned, it turned out that two sheets were missing, which the library could only buy again in 1891 and 1954.

For the Weimar Complete Edition of Luther's Writings, Gustav Kawerau (1885/86) arranged the glosses of the Wolfenbüttel manuscript and the scholias of the Dresden manuscript after the individual psalm verses so that the reader could understand Luther's lecture from the combination of both sources.

Glossary to Ps 34,6  LUT : “Others, however, bow and deliberately run away from Christ. However, whenever I have a nutty text whose shell is hard to me, I immediately throw it on the rock (Christ) and find the most delicious core. “In allusion to Hld 6,10  VUL , the Psalter was referred to in monastic literature as the nut garden, hortus nucum .

PRAEFATIO IHESU CHRISTI filii dei et domini nostri in Psalterium DAVID.
Preface by Jesus Christ, the Son of God and our Lord, to the Psalter of David.
Ego sum ostium, per me si quis introierit salvabitur, et ingredietur et egredietur et pascua inveniet. Ioh. X. ( Joh 10,9  VUL )
I am the door; if anyone goes in through me he will be saved and will go in and out and find pasture. Joh 10,9  LUT
Haec dicit Sanctus et Verus, qui habet clavem David, qui aperit et nemo claudit, claudit, et nemo aperit. Apo. 3. ( Off 3.7  VUL )
This is what the holy one, the truthful one, says, he who has the key of David, who opens and nobody locks, and he who locks and nobody opens. Rev 3,7  LUT
In capite libri scriptum est de me, psal. XXXIX. ( Ps 39.8  VUL )
In the book is written about me. Ps 40,8  LUT
Principio, quod loquor vobis Io. VIII. ( Joh 8,25  VUL )
What should i tell you first? Joh 8.25  LUT
Propter hoc sciet populus meus nomen meum in die illa, quia ego ipse qui loquebar Ecce assum. ( Jes 52.6  VUL )
Therefore, on that day my people should recognize my name, that it is I who say: Here I am! Isa 52,6  LUT
Testis primus Moses.
First witness Moses.
Si non tuipse praecedas, ne educas nos de loco isto. Dixitque dominus: facies mea precedet te et requiem dabo tibi. Exo. xxxiii ( 2 Mos 33,14-15  VUL )
If your face does not go first, do not lead us up from here. The Lord said, Let my face go first; I want to guide you to rest. 2 Mos 33,14-15  LUT
Secundus Zacharias propheta.
Second [Witness] the Prophet Zacharias.
Dominus Ihesus Christ est oculus lux et visio hominis et omnium tribuum Israel. Zacha. IX. ( Sach 9.1  VUL : Domini est oculus hominis et omnium tribuum Israël.)
The Lord looks upon the people and upon all the tribes of Israel. Zech 9,1  LUT
Tertius Peter apost.
Third [witness] the apostle Peter.
Omnes prophetae a Samuel et deinceps, qui locuti sunt, annuntiaverunt dies istos. Act. 3 ( Acts 3.24  VUL )
All the prophets from Samuel on and after, however many spoke, they proclaimed these days. Acts 3,24  LUT