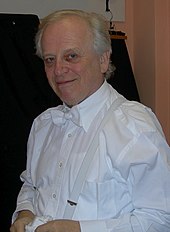 Zoltán Peskó (born February 15, 1937 in Budapest ; † March 31, 2020 there ) was a composer and conductor from Hungary who lived in Italy, Germany, Switzerland and most recently in Hungary again.

Zoltán Peskó came from a Lutheran church musician family, both his father (Zoltán Peskó senior, 1903–1967) and his brother György Peskó (1933–2002) were organists. Zoltán completed a music degree in his hometown at the Franz Liszt Academy of Music and initially worked as a conductor and composer of film and stage music at the Hungarian National Theater and television. He also taught at the University of Theater and Film Arts. In January 1964 he did not return to Hungary from a concert tour. He attended master classes in Italy and Switzerland. At the Accademia Nazionale di Santa Cecilia in Rome he studied composition with Goffredo Petrassi , in conducting with Franco Ferrara and Sergiu Celibidache , after which he studied in Basel in 1965 with Pierre Boulez .

Peskó's career as a conductor ended abruptly with shoulder surgery in 2012. As a result, he suffered a stroke with hemiplegia and returned to Budapest from his residence in Neggio in Ticino. Zoltán Peskó was married to Katalin ("Tünde") Peskó. The two had already met at school in Budapest. The marriage resulted in two daughters, Patrizia Ester (* 1968) and Susanna (* 1970). Tünde devotedly cared for her husband for the last few years, which he spent in a wheelchair, no longer responsive. She died on February 1, 2018.

In Rome in 1965 he took up the podium for the Roman symphony orchestra of the RAI for the first time . Between 1966 and 1973 he worked at the Deutsche Oper Berlin and was a lecturer at the State University for Music and Performing Arts there . His debut in 1970 at La Scala in Milan (where he conducted “Odysseus” by Dallapiccola , the “Fiery Angel” by Prokofiev and Mozart's “ Gardener from Love ”) marked the start of an international career. This began with the Berlin Philharmonic , the BBC Symphony Orchestra and the Royal Concertgebouw Orchestra in Amsterdam.

Numerous guest concerts took Peskó through Europe, South America, the former Soviet Union and the United States. In 1973 he became chief conductor of the Teatro Comunale in Bologna , three years later he took the same position at the Teatro La Fenice in Venice, and from 1978 to 1983 he directed the orchestra of the Italian Radio RAI in Milan. Between 1977 and 1980 he restored " Salammbô ", the first (unfinished) opera by Modest Mussorgsky , which he premiered in concert in November 1980 in Milan and whose first staged performance under the direction of Yuri Petrovich Lyubimov in the Neapolitan Opera House San Carlo he directed.

From 1995 to August 1999 he was general music director at the Deutsche Oper am Rhein ; from 2001 to 2005 he was music director of the Portuguese Symphonic Orchestra and the Lisbon Opera House Sao Carlos. There he conducted, among other things, Die Zauberin (Чародейка, Tscharodeika), a highly acclaimed re-excavation of Tchaikovsky's almost never played opera . From 2000 he led the master class for young conductors at the Bartók Festival in Szombathely , where he conducted the final concert with the Hungarian National Philharmonic in 2007.

Peskó was regularly invited to the major European music festivals and was a frequent guest in the music metropolises of Europe. His work as a concert and opera conductor spanned the entire spectrum from the Renaissance to the contemporary avant-garde . He has conducted works by Hungarian composers of the 20th century ( Béla Bartók , Zoltán Kodály , Sándor Veress , György Ligeti , György Kurtág , András Szőllősy and Péter Eötvös ) and the avant-garde of European and American music (including Luigi Dallapiccola ) , some of which were premieres , Goffredo Petrassi , Bruno Maderna , Morton Feldman , Luciano Berio , Luigi Nono and Giacinto Scelsi ) The conductor's unusual versatility is documented in numerous radio and vinyl recordings. He has published essays on music in German and Hungarian.