Eastern Christianity , Christian Orient ( Latin Oriens Christianus ) or Eastern Church refers to the part of Christianity whose traditional origins go back to the ancient church patriarchates of Constantinople , Alexandria , Antioch and Jerusalem and, from the point of view of the Western Church, lie in the east . The origins and mission areas are Eastern and Southeastern Europe , the Near and Middle East to India and the Far East as well as eastern North Africa .

Already in early Christianity different formed in Christian communities rites and traditions , which further developed as a result. The patriarchates of Constantinople, Alexandria, Antioch, Jerusalem and Rome held a special position in the ancient church .

In late antiquity, the Roman Empire split into Western Roman ( Rome ) and Eastern Roman ( Constantinople ) and the Roman Empire developed into different ecclesiastical traditions in the Latin West and Greek East, which ultimately led to division in the Eastern Schism . In Western Christianity , the Latin Church and the resulting churches of the Reformation and later secession emerged from the ancient church patriarchate Rome .

However, since at least the Middle Ages, the geographical allocation is no longer clear; Among other things through the Crusaders , Latin, Western Christianity also came to the Middle East.

Number of Orthodox Christians by Country

In return, through historical developments, the Western Latin Church has also spread to the original areas of Eastern Christianity.

Eastern churches ( Latin Ecclesiae Orientales ) are the pre-Reformation churches of Eastern Christianity. The religious traditions in the individual churches are very different. These differences go back to the early Christian centuries, when the various churches separated from one another due to differences in Christology and fundamental theology , but also for political and national reasons. They can be divided into four main groups of Eastern church families, each of which has certain theological and cultural similarities:

The Eastern Churches belong to the Eastern Churches, whose traditional origins go back to the Oriental rites (Alexandrian, Armenian, Western and Eastern Syriac) and whose historical development was separate from the Roman Imperial Church. These include the Eastern Orthodox Churches and the Eastern Catholic Churches with Eastern rites, united with Rome. 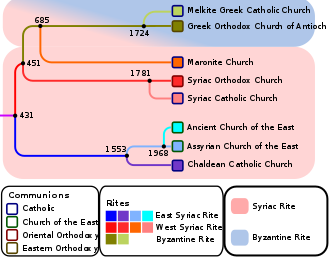 Family tree of the Syrian churches

Syrian Christianity originated in the Near East from the early church patriarchates Antioch and Seleukia-Ctesiphon . These include the Syrian-speaking ethnic groups of the Aramaeans , Assyrians , Chaldeans and Maronites as well as the Thomas Christians in India.

Armenian Christianity, which is mainly supported by the Armenian diaspora , has even had a Protestant branch since 1846, the Armenian Evangelical Church with its headquarters in Yerevan and Beirut.

From the Patriarchate of Alexandria , the Coptic Church and various Oriental-Orthodox and Catholic churches and the resulting Ethiopian Christianity in Ethiopia and Eritrea arose . Nubian Christianity has perished.

The basic language of Alexandrian-Egyptian liturgy is and remains Greek. Various Coptic languages ​​were still used in late antiquity, and Nubian and Ethiopian in the mission areas. After the Arabization of Egypt, Arabic was taken up for the biblical and hagiographic readings and used in the priestly prayer books as an aid to understanding in marginal translations. In modern times, Arabic is increasingly used in the texts of the community. Despite the social disadvantage in an Islamic environment, Coptic Christianity has preserved its traditions and developed a self-confidence that can be traced back to ancient Egypt.

Although the Eastern Churches differ in their specific rite and canonical jurisdiction in many ways, they have the following essential similarities:

The Apostolic See has issued a large number of pronouncements on the Eastern Churches, extracts of which are listed below: