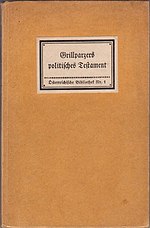 The Austrian Library is a book series on Austrian subjects that was published from 1915 to 1917 as a side piece to the Insel-Bücherei in the Leipziger Insel Verlag .

Already in the middle of the First World War - and thus also as a small symbol of the war alliance between the German Reich and the Austrian Empire - the first volume of a new book series by Insel Verlag was published in 1915 with the title Grillparzer's Political Testament , which was called the Austrian Library (ÖB) was published by Hugo von Hofmannsthal as a side piece to the Insel-Bücherei . It belonged to the first series in the series with six volumes and was announced in the Börsenblatt for the German book trade on July 30, 1915. The second and third series, each with a further seven volumes, came into bookshops on November 23, 1915 and June 10, 1916 .

The publisher Anton Kippenberg wanted to discontinue the series after the third series, but the intervention of his wife, Katharina Kippenberg , led to a continuation of the series up to the fourth with another six volumes, which was delivered just before May 30, 1917.

Hofmannsthal then no longer responded to an offer from Katharina Kippenberg to continue the series in the event that he procured paper, as he was probably no longer interested in continuing this project. The Austrian Library , which began with such an extensive edition plan by Hofmannsthal, ended after just two years with the title Schubert im Freundeskreis (ÖB 26). The main reasons were insufficient staffing capacities in the publishing house, the war-related rise in printing costs that could not be passed on through the sales price, and above all the lack of sufficient sales figures.

Not least because of the political changes in Austria and Germany, the main sales areas for this series, which occurred as a result of the Versailles Treaty , the sluggish sales of this series of books continued to decline after the war to such an extent that the remainder of the books had to be sold cheaper as a paperback. Five titles that Kippenberg rated as suitable for the Insel-Bücherei publishing concept, such as "Abraham von Santa Clara, selection from his writings" (ÖB 8), the "Letters to Sophie Löwenthal" by Nikolaus Lenau (ÖB 16 ) or Adalbert Stifter's “Briefe” (ÖB 22), were incorporated into these with their layout.

The emergence of the series was closely related to the ( German-Austrian ) national idea , which had moved back into the focus of Austrian politics as a result of the First World War , and which, due to the extremely differentiated ethnic composition of the people in the Austrian Empire, hardly achieved a comprehensive presence throughout the country and wanted to strengthen the Hofmannsthal with this series held in German . As evidenced by the eight-page advance notice he wrote for this series (see also images above), he planned a representative cross-section, in particular through Austria's history and its intellectual life in the broadest sense.

In addition to medieval town chronicles of St. Pölten and Steyr , correspondence ( Theodor Billroth ), diaries ( Ernst von Feuchtersleben ) and statements by important Austrian personalities from science ( Paracelsus ), art, religion ( Nikolaus von Kues ), politics ( Johann Philipp von Stadion ) and military affairs ( Prinz Eugen ) as well as treatises on the geographical and ethnic diversity of the dual monarchy ( Chronik des Landes Böhmen von Hagecius ) also works of poetry and small prose by Austrian authors ( Johann Nestroy , Ferdinand Raimund or Marianne von Willemer ), but mostly by 19th century and earlier, appear. Due to the early termination of the series, however, only a fraction of the topic could be realized:

The furnishings of the series essentially corresponded to the Insel-Bücherei, but had uniformly plain yellow cardboard covers with title plates initially labeled in black (colors of the Austrian Empire). From ÖB 14 onwards, a green title plate frame was used with black lettering, which was intended to soften the previous design severity somewhat in order to increase the attractiveness of the series for buyers. The book block is stapled.

The remainder of the individual titles, which were not transferred to the Insel-Bücherei due to their specifically Austrian subject matter, were sold with a red paperback cover , a red-framed title label and a small label on the spine with no reference to the Austrian library, so that they were no longer easily recognizable as serial ribbons . Only the sheet counter imprinted at the bottom of a few pages showed the row affiliation.

In some volumes, including the brochures, there are variants of the texts on the title and spine labels and on the title page.

The sales price of the ribbons was initially 80 hellers in Austria and 60 pfennigs in Germany , but later rose significantly due to the inflation that began in Austria and Germany during the war years .

An Austrian library with publishers in Austria

The Austrian Library at the Volk und Welt publishing house

It was not until the late GDR period that the Berlin publisher Volk und Welt used the former island series name again and, largely in collaboration with Böhlau Verlag Wien, a series of 16 editions in 18 volumes with Austrian authors was launched brought. As a prelude appeared in 1985 u. a. a selection of aphorisms and poems by Karl Kraus from 1903 to 1933, edited by Dietrich Simon . Through this series, the publisher was also able to make Freud's psychoanalytic work from 1890 to 1937 available to a broader public in the GDR as "essays" for the first time . The three-volume edition, published in 1988, had three editions until 1990, when the German reunification meant that there was no longer any publishing space for a continuation of the series and, after the edition, five new titles were discontinued, again Freud's The Interpretation of Dreams .