College Hall of the AUB

The American University of Beirut ( AUB ) is a non-denominational university in Beirut that is registered as a private US university in the state of New York , and thus enables its graduates to continue their studies in the USA. With around 7,000 students, the AUB is one of the most important universities in the Middle East today .

The campus has a size of around 250,000 square meters and is located in the Jamia district of the same name ( Arabic جامعة 'University'), which belongs to the Dar el-Mreisseh district. The campus is located on the Mediterranean Sea, only separated from the Corniche Beirut promenade by a street . The radio tower on the opposite side of the Corniche is also called the AUB Tower or University Tower . The university clinic, the American University of Beirut Medical Center (AUBMC), is located in the neighboring district of Ain el-Mreisseh.

AUB Tower, on Beirut's promenade, opposite the university

It was founded in 1866 in the then Ottoman Empire as a non-state university under the name "Syrian Protestant College" by Protestant missionaries from the USA , as the second US university outside North America after the Robert College founded in Constantinople in 1863 . Even before Lebanon's independence in 1943 , the Protestant theological faculty was split off in 1932 and now became the Near East School of Theology , one of the most important Protestant theological universities in the Arab world.

The university library includes the Nami Jafet Memorial Library , the Engineering and Architecture Library and the Science and Agriculture Library . The Agricultural Research and Education Center (AREC) on the Bekaa level is also connected with its library. 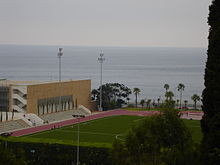 University sports ground with the Mediterranean Sea in the background