from Wikipedia, the free encyclopedia
f9

Anaktorio ( Greek Ανακτόριο ( n. Sg. )) Is the largest municipality in the Greek municipality of Aktio-Vonitsa , which was formed in 2011 around the small town of Vonitsa (Greek Βόνιτσα, old name Bounitza or Bounitsa or Bonditza ), which is the seat of the municipality with 4916 inhabitants. Under the name Vonitsa-Anaktorio existed from 1997 to 2010 an independent community in the Aetolia-Akarnania prefecture , whose official name was Anaktorio and was borrowed from the ancient Corinthian city ​​founding in the area of ​​today's community; but there is no modern settlement called Anaktorio in the area.

The Anaktorios area is located on the south coast of the Ambracian Gulf and comprises the northwestern region of the Aetolia-Akarnania regional district. The west of the municipality forms the coast of the Ionian Sea . The northwesternmost branch of Anaktorios, the peninsula Aktio ( Actium ), forms the southern boundary of the Strait of Preveza and Strait of Aktio (Actium). Preveza is located north of the almost 725 m wide strait which connects the Ambracian Gulf with the Ionian Sea. There are several lakes on the Aktio (Actium) peninsula. These include the large and small Saltini Lake and the Voulkaria Lake . The southern area is dominated by the foothills of the Akarnan Mountains (Ori Akarnanias). The coastal region to the Ambracian Gulf, at the same time the northern border of the municipality, is mainly marshland. To the southwest and south the area borders on the municipality of Paleros and to the southeast on the municipality of Medeona. 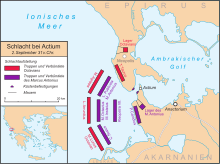 Rules of engagement for the naval battle at Actium on September 2, 31 BC. With the ancient settlements Anactorium (Anaktorio) and Actium (Aktio) in the area of ​​Anaktorios

The settlement of the area, which is documented by sources, began in ancient times. The Greek polis of Corinth was founded in 630 BC. In the region of Akarnania a colony, the Polis Anaktorio. Anaktorio lost its importance when the Romans founded the city of Nikopolis north of today's Preveza on the north coast of the Ambracian Gulf . The residents of Anaktorio, like those of other settlements in Acarnania, were asked to move to Nicopolis.

The ancient port city of Actium at the tip of the peninsula of the same name was also located in the area of ​​today's municipal district. On September 2, 31 BC The sea battle at Actium took place off the coast of the area near Aktio (Actium) in the Ionian Sea , from which Octavian (later Roman emperor Augustus ) emerged victorious against Marcus Antonius and Cleopatra . In the area of ​​Aktio there was from the 5th century BC A sanctuary for the inhabitants of Akarnania: the Apollo temple Aktio. This was built by the residents of the city of Anaktorio and served as a sanctuary for the entire population of Akarnania. The temple was partly destroyed by an earthquake and partly by sliding into the Ionian Sea; The remains can now be seen in the Preveza Archaeological Museum.

The Akarnan settlement of Thyrio was also part of the later municipality. The city walls around Thyrio are said to have had a circumference of 9,914 meters.

During the rule of the Byzantine Empire (395 AD to the 15th century with interruptions) the settlement was rebuilt under the current name Vonitsa. In 1081 the Normans under Robert Guiscard conquered the place and devastated it. After the Byzantine Empire was defeated by the conquest of Constantinople in 1204, Vonitsa fell to the despotate of Epirus in the Latin Empire . In the second half of the 13th century, troops of the Nicaea Empire attacked Vonitsa and besieged the city. In August 1294 Vonitsa married Philip I of Taranto . The city was not conquered until 1305, when the Neapolitan Angevin rule over Vonitsa began. In the following period Vonitsa was attacked by Thessaly, but not conquered. In 1305 Charles II of Anjou conquered Vonitsa for the Angevin family. In 1314 Vonitsa fell back to the despotate of Epirus. In 1331 Vonitsa was under the rule of the Orsini as ruler of the despotate Epirus and Orsini went after an attack by Walter VI. lost by Brienne . Johannes I. Orsini recognized the suzerainty of Walter VI. from Brienne and got Vonitsa back, although initially lost militarily.

Vonitsa remained under the rule of Walter VI. of Brienne and his successor, Jean d'Enghien until 1373. In 1362 Leonardo I conquered Tocco Vonitsa. In April 1378 knights from the Principality of Achaia Vonitsa conquered for this from Carlo I. Tocco , who surrendered the city without a fight. In 1380 Vonitsa fell back to Carlo I. Tocco. In 1479 the Ottoman Empire conquered Vonitsa. Vonitsa was recaptured by the Venetians in the 18th century during the Venetian-Austrian Turkish War . Under Venetian rule Vonitsa was divided into three quarters: Recinto, Borgo and Boccale. The Recinto quarter included the Venetian castle. In the Peace of Campo Formio of 1797 Vonitsa briefly became French property under Napoleon Bonaparte along with the Ionian Islands, Preveza and Parga . On January 3, 1799, Russia and the Ottoman Empire agreed on a treaty by which the French possessions of the Ionian Islands and in Epirus and Aetolia-Acarnania were assigned to the Ottoman Empire. In March 1799 a Russian-Turkish fleet succeeded in conquering the Ionian Islands. Vonitsa fell to the Ottoman Empire like the other French mainland possessions. Ali Pascha Tepelena occupied the French possessions on what is now the west coast of Greece, including Vonitsa, immediately after the conquest of the Ionian Islands. In contrast to the French mainland possessions under the sovereignty of the Ottoman Empire, these remained independent as a republic .

After the end of the Greek War of Independence in 1829 Vonitsa became part of the Kingdom of Greece de facto and, according to the London Protocol of 1832, de jure . On October 4, 1862 von Vonitsa from General Dimitrios Grivas revolted with insurgent troops against Otto, the then Greek king of Bavarian origin . According to other sources, the father of General Dimitrios Grivas, Theodor Grivas, was the leader of the revolt against the Greek King Otto.

During the occupation of Greece in the Second World War, there was a prison in Vonitsa, in which political prisoners were held by the Greek collaboration government.

Vonitsa and its surroundings were shaken on March 23, 1983 by a severe earthquake with a magnitude of 6.0 on the Richter scale , which resulted in seven injuries and 160 damaged buildings in and around Vonitsa. 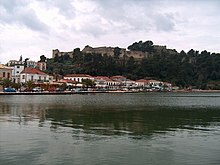 View of the small town of Vonitsa from the Ambracian Gulf

Kouros from the ancient settlement of Aktio, ca. 550 BC Chr. 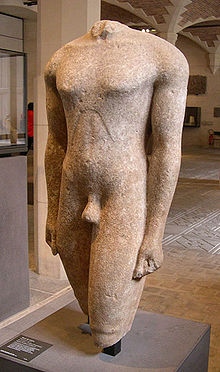 Kouros from the ancient settlement of Aktio, ca. 570 BC Chr.

Until the Greek local government reform in 1997, Vonitsa was the administrative seat of the province (eparchia) Vonitsa ke Xiromerou, which roughly corresponds to the area of ​​today's municipalities of Aktio-Vonitsa and Xiromero  . The municipalities, which were then united to form the municipality of Anaktorio, now form six local units that elect their own representatives (population figures based on the 2011 census).

Half of the residents of Anaktorio live in the small town of Vonitsa.

Anaktorio is well connected to the Greek highway network. The national road 42 leads from Amfilochia ( national road 5 , in the future motorway 5 ) via Vonitsa to the island of Lefkada . From the north there has been a road connection to Preveza since 1996 through the Preveza-Aktio-Tunnel , which crosses under the Preveza strait and continues the European route 55 from Parga and Preveza to the south.

Anaktorio does not have a railway connection.

One of the sights of the town of Vonitsa is a very well-preserved castle from the Venetian era.