Anvil! The story of a friendship

Anvil! The Story of a Friendship (Original title: Anvil The Story of Anvil ) is an American documentary film by Sacha Gervasi . The film, shot in 2006-2007 and released in 2008, deals with the Canadian metal band Anvil .

Metal and hard rock bands Scorpions , Whitesnake and Bon Jovi performed at the 1984 Super Rock Festival in Japan . The entire line-up would later sell millions of records, with one exception: Anvil. Musicians like Scott Ian , Slash , Lemmy Kilmister and Lars Ulrich give their assessment of the group below and regret that the Canadian musicians never made it.

Steve "Lips" Kudlow now makes food deliveries for schools and other institutions. Robb Reiner, the band's drummer, works in construction. The group still exists. An appearance on Kudlow's 50th birthday is shown. Tiziana Arrigoni, a friend of the band, organized a European tour for the group. Kudlow and Reiner sense the chance of a comeback. The start of the tour takes them to the Sweden Rock Festival , where they meet old idols like Ted Nugent , Carmine Appice and Michael Schenker . The performance is promising, but then it goes downhill. You miss trains and flights. In Prague they arrive two hours late, whereupon the club owner withholds the fee. Kudlow is violent, but a lawyer intervenes. During a performance in Transylvania , Anvil plays in a stadium designed for 10,000 spectators - in front of 174 visitors. When performing in Germany, the expressly requested poster is hand-painted with a felt pen . After returning to Canada, guitarist Ivan Hurd marries Tiziana Arrigoni, but leaves the band shortly afterwards.

With the help of star producer Chris Tsangarides , the group tries to record a new album. Tsangarides has known Anvil since the 1980s and had already produced her most famous album, Metal on Metal . He encourages the group to come to Dover , UK. However, the recordings cost £ 13,000 . The financial situation is precarious, however, and nobody in the group has enough money. Kudlow had to put another mortgage on his house and Glenn Gyorffy is homeless and lives in a garage. Kudlow tries unsuccessfully at a call center for sunglasses. Eventually his older sister Rhonda lends him the money.

Reiner and Kudlow fell out during the recording of This Is Thirteen , but reconciled after a discussion. Back in Canada, the hoped-for record deal does not materialize. The group decides to sell the album through their own distribution. A Japanese promoter calls out of the blue trying to book Anvil for a festival in Japan. In fact, Anvil are opening a three-day festival and they fear an empty hall to play. When performing, however, the hall is full and the group plays a gig that is ecstatically celebrated by the audience.

Director Sacha Gervasi has been a fan of the group since seeing them live at London's Marquee Club on September 21, 1982 . In fact, he followed the group on their tours, working as a roadie in 1982, 1984 and 1985 . The band members gave him the nickname "Teabag" (tea bag, allusion to the tea consumption of the British). Gervasi finally found his way into the film business and after the great success of Terminal , in which he had worked as a screenwriter, tried to make a personal film and got in contact with Steve Kudlow again. 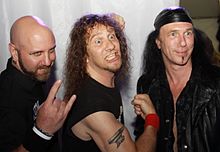 The film, funded by VH1 , premiered in January 2008 at the Sundance Film Festival . Anvil! has won more than a dozen American film and festival awards, including the Broadcast Film Critics Association Award and Independent Spirit Award for Best Documentary (both 2010), as well as the Sydney Film Festival , Los Angeles Film Festival and Galway International Film Audience Awards Festivals . Director Sacha Gervasi received a nomination for the Directors Guild of America Documentary Award .

Some of the documentation was received with great enthusiasm by the American trade press. The magazine Entertainment Weekly reviewed on Gervasi's film as funny and unexpectedly moving documentary about "the greatest metal band of which you probably never heard of has." Anthony Lane ( The New Yorker ) praised Anvil! as "the most thrilling release of the year". The film lives "somewhere in this entertaining unrestricted gray area between self-parody and the triumph of the human spirit," according to the San Francisco Chronicle . Anvil! Wouldn't encourage people to change their minds about heavy metal, but the film gives new impetus to reflect on a cruel cultural logic that is increasingly blurring the balance between success and failure, according to AO Scott ( The New York Times ).

The reviews in Germany were also largely positive. The German music magazine Rock Hard chose the US DVD version in issue 269 (08/2009) as “DVD of the month”. Götz Kühnemund explains :

“Never before has anyone succeeded so well in capturing the soul, the glamor, the comedy and the tragedy of Heavy Metal in one and a half super-entertaining hours [...]. You suffer with Anvil, you live and laugh with them, you laugh at them sometimes - only to be moved to tears to find that you can hardly imagine more likeable guys [...]. You discover the little lip in yourself. You are proud to be a metalhead. "

- Götz Kühnemund : DVD of the month

“Like no other music film, 'The Story of Anvil' tells over and over again of unconditional, infinitely naive love for rock 'n' roll, of manic longing for the big stages, of the art of failing with dignity. And about the affection of two men for each other who swore as teenagers to rock together until they were old and gray - and to whom this promise often means more than it is good for them and their families. "

- Thorsten Dörting : Spiegel Online : Welcome to the valley of the manes

The film has been compared to the mockumentary This Is Spinal Tap on numerous occasions and has been widely acclaimed by such well-known film artists as Dustin Hoffman , Keanu Reeves and documentary filmmaker Michael Moore . Jan Kedves ( die tageszeitung ) also compared the film when it was released in German theaters in early March 2010 with the documentary Metallica: Some Kind of Monster and the feature film The Wrestler and described Anvil! as a “rehabilitation story” and “heavy metal tour comedy”, which also plays with the motif of the “aging mercenary body” and elements of the psychotherapy drama. Die Welt am Sonntag rated the film as an “ode to faith, to a shared vision and to music as the purpose of life. A song of praise for loyalty and solidarity, which are not so strong in any other genre of music as in metal. ”Thomas Winkler ( Frankfurter Rundschau ) expressed himself similarly , who described the efforts of Kudlow and Reiner as“ sometimes very funny, sometimes painful, always tragic and above all very moving ”.

Anvil benefited from the history of their failure: in 2009 the band performed at the Download Festival and toured with Saxon and AC / DC . The group also appeared on The Tonight Show with Conan O'Brien . The self-produced CD This is Thirteen also sold very well due to the film's success, so that Anvil was able to cover the costs of production. The CD was then also regularly offered in stores through individual distributors.